One place that you simply can’t leave off of your Faroe Islands itinerary is the historic village of Kirkjubøur on the island of Streymoy.

This gorgeous spot in the Faroes holds the key to the islands’ history and it is as beautiful as it is fascinating.

Traveling to Kirkjubøur – A Practical Guide

My initial plans for the Faroe Islands included spending a few hours hiking to Kirkjubøur, hanging around the historic village for a bit, and then hiking back to Tórshavn.

As the days went on, I became keener on checking out some of the lesser talked about islands such as Nólsoy and Skúvoy, and the desire to hike to Kirkjubøur kind of fizzled out. 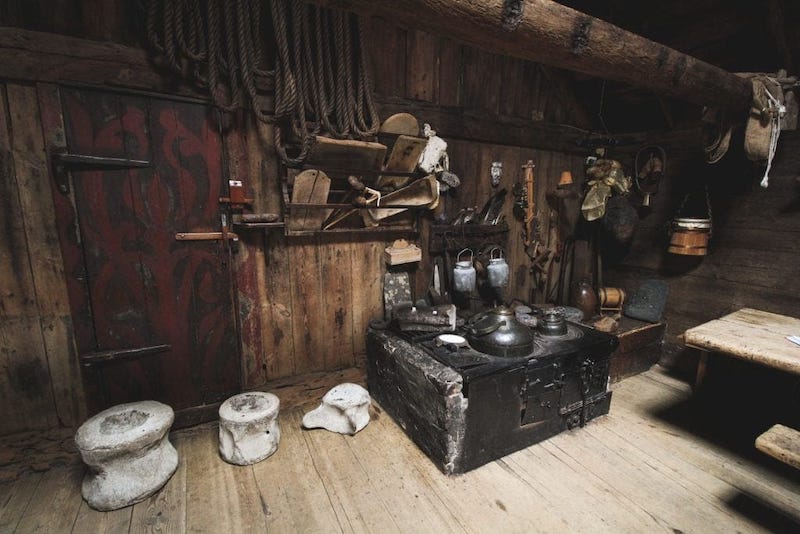 Well, due to the Faroes working her magic (my way of saying providing us with less than desirable weather), we skipped out on Skúvoy and axed the long day trip to Nólsoy.

This left us with an entire day in Tórshavn and we ended up throwing Kirkjubøur back onto our itinerary.  We didn’t do this trip by foot as the weather truly was horrendous, but rather by car.

Our last adventure in the Faroe Islands, and one that I am so happy we got to experience.  Visiting Kirkjubøur is an absolute must for anyone visiting the islands. 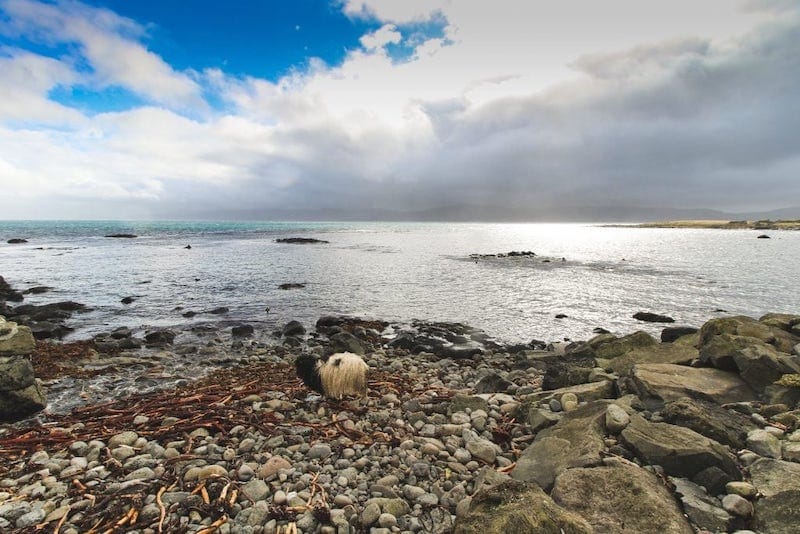 Kirkjubøur is about a twenty-minute drive from the Faroese capital city of Tórshavn.  It is the southernmost village on the island of Streymoy and really does sit at the end of the road.

What makes Kirkjubøur so notable is that it is the historical and cultural hub for Faroese history.  You can find three of the most historical sights in the Faroe Islands located within this village.

The ruins of this never-finished cathedral are situated by the sea in Kirkjubøur.  Its initial construction began around 1300 by Bishop Erlendur and was never actually completed because it was never roofed. 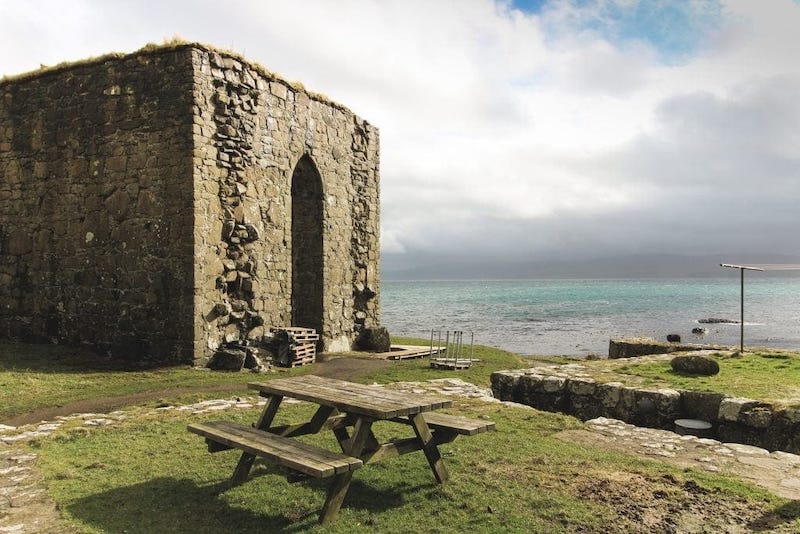 Conservation efforts have been taking place since 1997 on the Cathedral, but have not been completely ongoing.

In 2010, however, efforts picked up a bit and protecting it has become a priority as it slowly wanes as a result of seawater, the wind, and the environment.

This charming white church dates all the way back to the 12th century and is still in use today, making it the oldest church in the Faroe Islands that is still being used. 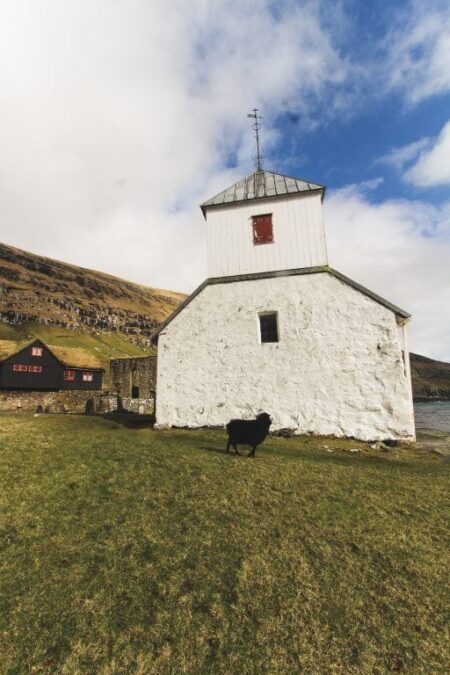 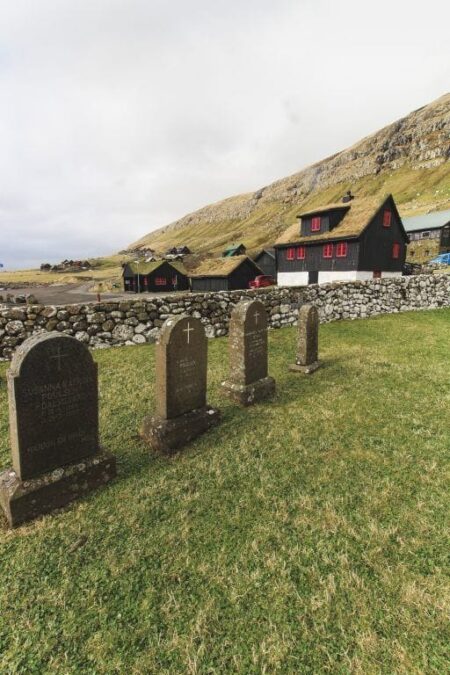 Literally meaning “King’s Farm”, Kirkjubøargarður is one of, if not the oldest, still inhabited wooden houses in the world.  Dating back to the 11th century, it was initially used as the episcopal residence and seminary of the Diocese of the Faroe Islands.

There are many legends that surround Kirkjubøargarður, and one of the most noteworthy ones is that the wood for the houses came as driftwood from Norway and was collected, sorted, and arranged to be used as building material.

If you know the Faroe Islands, you’ll know that there are no natural trees or forests on the islands, therefore making wood a very valuable and sought-after material. 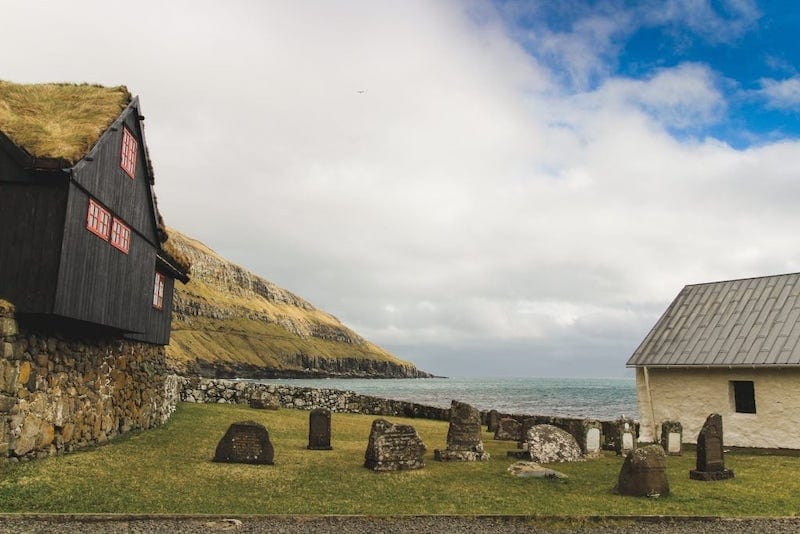 The oldest part of the farmhouse is the smoke room, or roykstova.  It doesn’t quite fit with its foundation in its present state which has given an indication that it was moved from its original state.

It is also said that Bishop Erlendur wrote the “Sheep Letter” inside of Kirkjubøargarður in 1298, which gave us the earliest documentation of the Faroe Islands we know today.

Interestingly, the Patursson family, which has been the house’s occupants since 1550, is still living residing there (the 17th generation!)

Today, the house has been turned into a museum.  The farm also is home to sheep, cattle, and some horses and it is possible to purchase a coffee here and buy fresh mutton directly from the farmer himself.

We headed out to Kirkjubøur in the middle of the afternoon and it was sunny as we arrived and started raining and became super windy within a matter of minutes.  Welcome to the Faroe Islands, basically.  I took the shades off and put my rainjacket’s hood up and soldiered on to explore this historic Faroese village.

After checking out the sites mentioned above, we decided to walk down closer to the water for some better views of Kirkjubøhólmur, an islet that sits in between Kirkjubøur and the island of Hestur in the background and is home to an eider duck community. 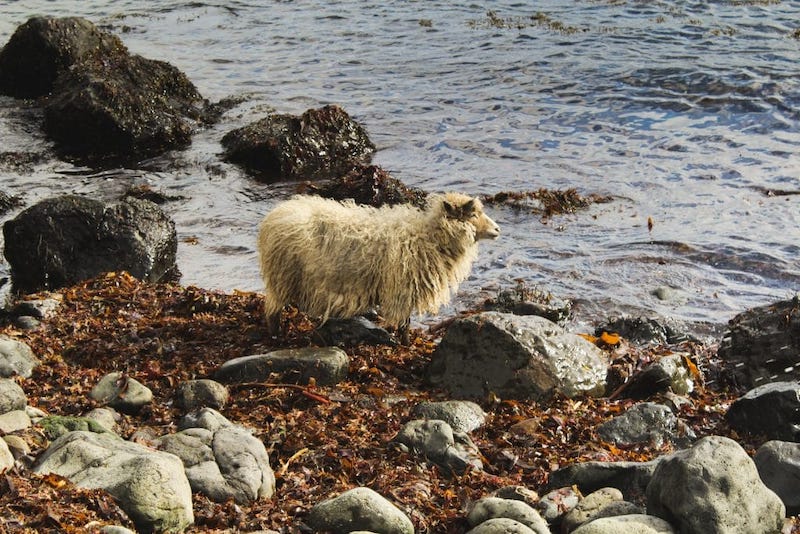 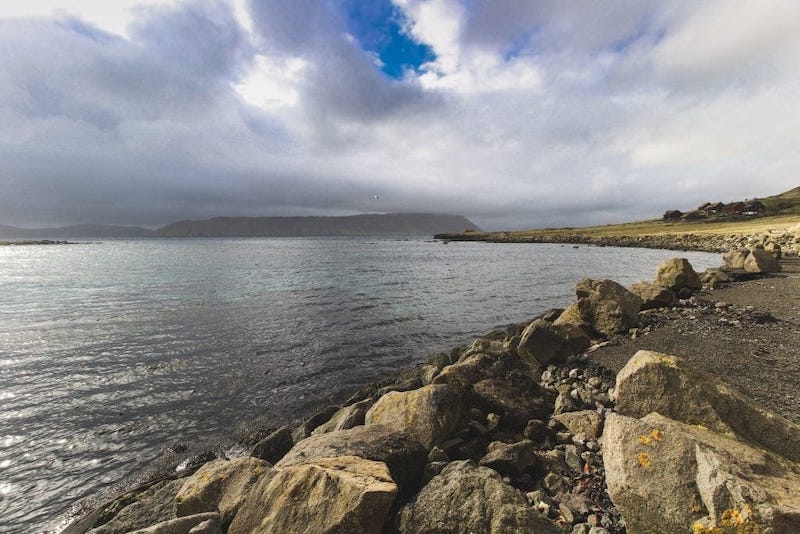 Kirkjubøhólmur actually contains remnants of the old Kirkjubøur which suffered from a fierce storm in the 16th century and destroyed most of the fifty homes that existed in the village at that time.

As we walked down by the sea we saw possibly the worst thing I could have ever seen… a dead sheep.  The poor thing had its leg dismembered in rocks up from the shore a bit and it died on its way down to the water.  Talk about ruining someone’s afternoon.

That event really shook me up and we stood around, took in the views, and then sheltered our wind-blasted bodies in the heated bus shelter until we packed up the car and headed back to Tórshavn. 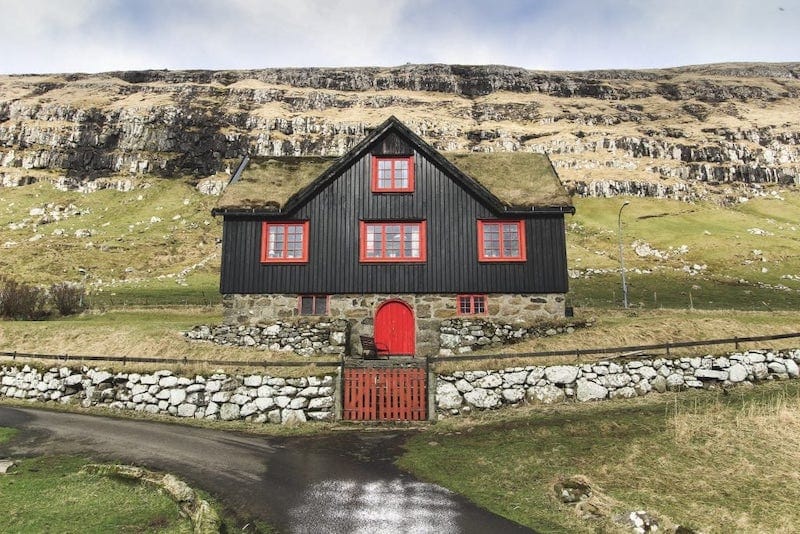 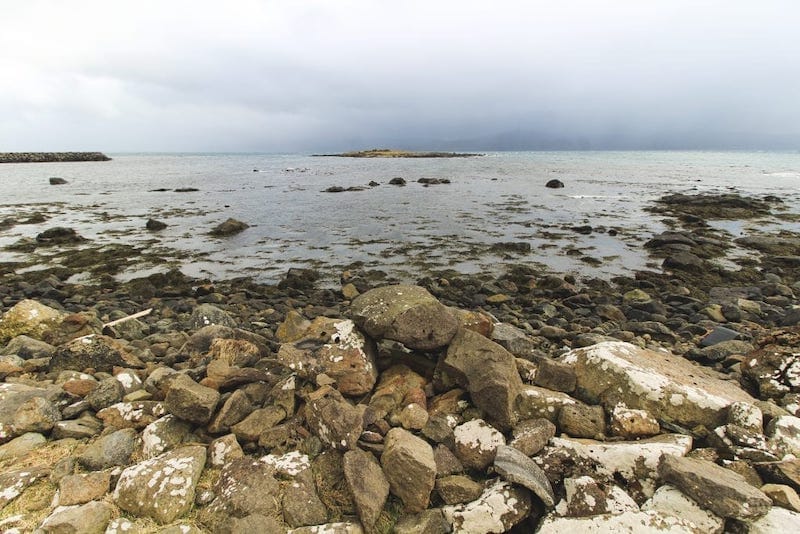 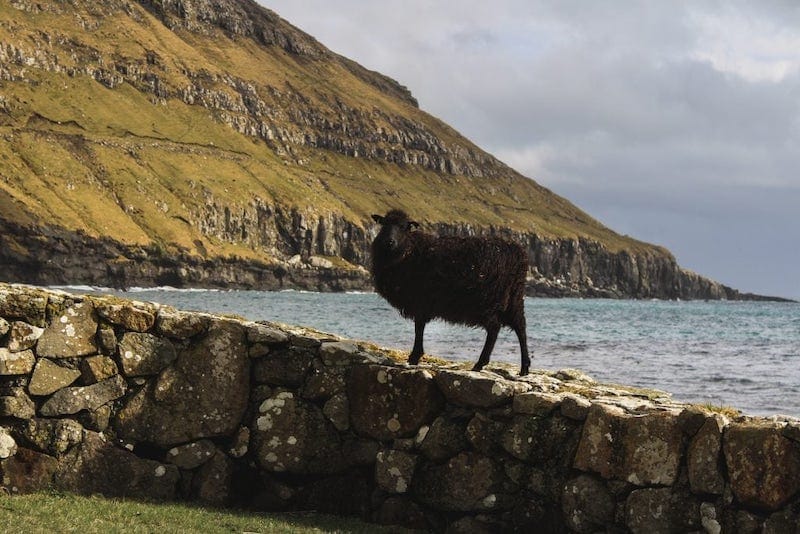 Getting to Kirkjubøur from Torshavn

You can get to Kirkjubøur one of three ways really… by car, by foot, or by bus.  The bus is free, as are all buses in and around Tórshavn.  Just be sure to hop on the 101 to Kirkjubøur.

For directions on foot, you can check out these very detailed instructions from Make.fo.

If you have a rental car, the village is not far away from Tórshavn as noted above.  It is simply about a twenty-minute drive south of the capital city. 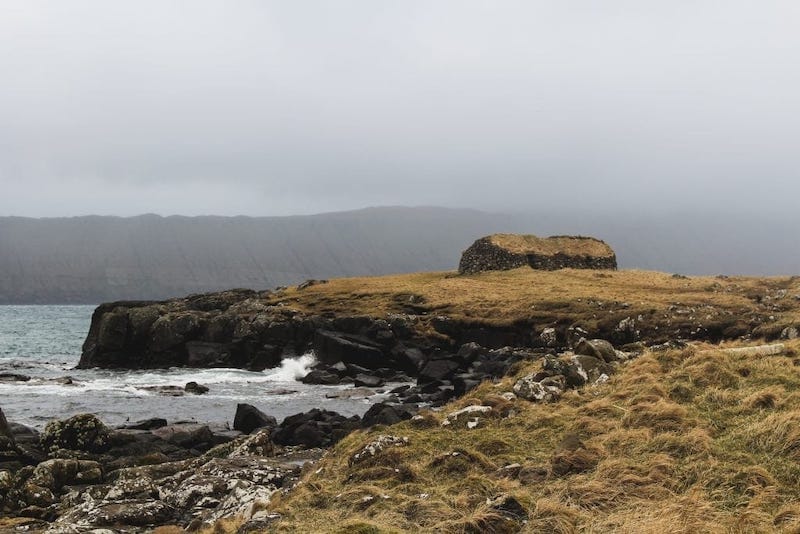 You’ll pass the Gamlarætt ferry port on the way and that will let you know that you’re about five minutes from Kirkjubøur.

On a side note- Kirkjubøur would be an ideal pit-stop on your way to the ferry port if you’re looking to take the ferry to Sandoy for the day.  You really don’t need much time in Kirkjubøur to see it all. 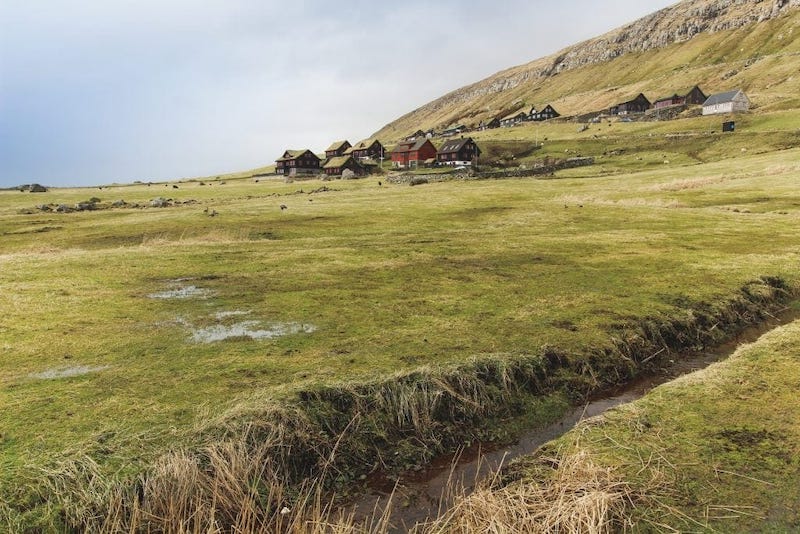 In conclusion, you definitely need to plot some time to check out Kirkjubøur.  If I had to do it all over again, I would have made the effort to actually do the hike, but the weather wasn’t cooperating, so I am glad we did end up seeing it via car.

It also helps to learn Faroese a bit before going to the islands as you can really immerse yourself in the history of the place.  But, you can certainly get by with English if not!

If you have any tips for travelers or questions, please leave them below!  Thanks! 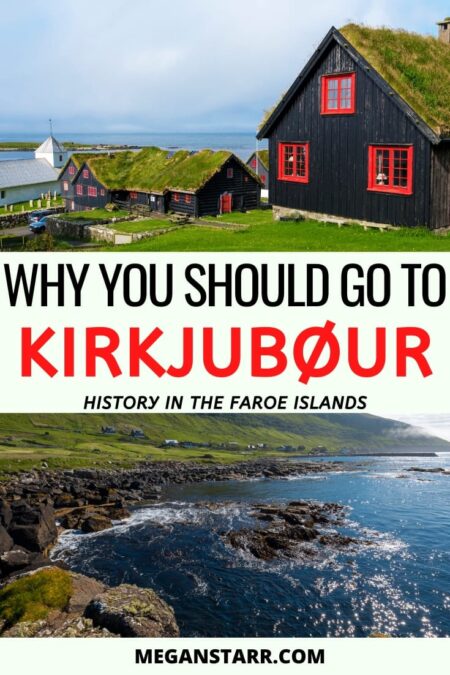