Getting from Bari to Polignano a Mare is actually a fairly easy process if you want to go by train. People often complain about Italian trains but I happen to like them.

They are just as efficient as German ones, just as delayed as German ones (you heard me, Deutsche Bahn) and they are significantly cheaper for travelers.

Top-rated tours and activities in Polignano a Mare for your trip:

POLIGNANO A MARE QUICK REFERENCE
Last-minute planning? You can see our top travel recommendations for Polignano a Mare right here:

Below are our favorite hotels and guesthouses in Polignano a Mare:

Need insurance for Italy? Be sure to check Italy travel insurance rates and coverage with our recommended provider, SafetyWing.

Renting a car in Puglia? You can get great options and the best rates here with Rentalcars.com.

3 Essential Things to Pack for Italy: Plug adapter (if coming from the US or a country that does not use a European plug), Klean Kanteen reusable water bottle, and Fodor’s Essential Italy guidebook.

I have long wanted to come to the Puglia region of Italy but I avoided it for a few reasons. The first being that I wanted to see it all and feared I would never have the time and energy to do it.

Secondly, I wasn’t totally sure how to get around the region and from city to city.

As it turns out, it is easier getting to some places, like Polignano a Mare, than it is to get to others with public transport.

This is a guide of what you need to know to take the train from Bari to Polignano a Mare.

I assume you’re in the city of Bari and can easily access the Bari Central Station. The Bari Station is a very important railway station in southern Italy and the Puglia region.

The annual ridership is around 14 million and the station is actually in impeccable condition, in my opinion.

It is also small enough to feel manageable, but large enough that you can store luggage there and grab a coffee to-go.

Is there Luggage Storage at Bari Central Station?

Yes, there is luggage storage at Bari Central Station. Fees differ based on your time frame, but it is extremely affordable and a great option if you need to utilize it.

The luggage storage is located at platform 1.  It will be located on the left side down the platform a bit.  The cost is 6 Euros for the first five hours and then 1 Euro up until a total of 12 hours.  The 13th hour and on is 0.50 Euros.

The sign there says it is open from 8am until 8pm, but the lady at information told me it actually stays open until 10pm.

Do check when you’re there to find out the closing time.

Is There Food at the Bari Train Station?

There is a café and small eatery called the “C House Bakery Café” at the Bari Central Station that also sells items to go.

They will have everything from freshly made espresso to bottles of water to sandwiches. It is a great option for travelers.

There are a few other cafes and restaurants and bars on the premises as well as a Spar grocery store (located at platform 1).

Buying a Ticket to Polignano a Mare

You can either purchase your ticket at the ticket counter through an actual person (they spoke English) or at the machine where I purchased it. Here are what both areas look like:

The Italian train ticket machine systems generally work really well and have a variety of language options, including English.

When you are on the machine, you will need to do the following:

How Much is a Ticket to Polignano a Mare from Bari?

The ticket prices can vary depending on the time of the day you’re traveling but they are generally very affordable. I paid €2.50 for my one-way ticket from Bari to Polignano a Mare.

This is a second-class fare and I didn’t see any options to upgrade (the train was really nice, so no need to pay for something more expensive).

How to Take the Train to Polignano a Mare

To be honest, the hardest part about taking this train journey was finding the actual platform. The train from Bari to Polignano a Mare was leaving from Platform 1 in the direction of Fasano and guess what? I couldn’t find it.

So… don’t go underground where all the other platforms are like I did. Platform 1 is actually on the right-hand side within the train station before you reach the café.

Don’t exit the station- there are doors that will lead you to it.

Make sure you validate, or stamp, your ticket. In order to do so, find one of these machines on the platform itself or inside of the train station. 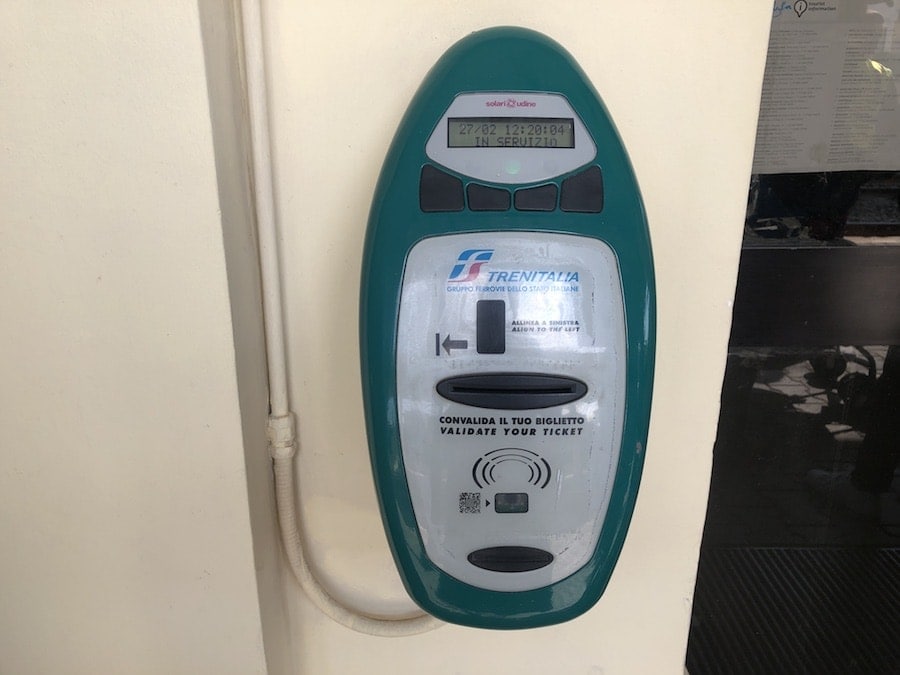 The Train Journey to Polignano a Mare

The actual train ride itself was about 30 minutes long. Completely chilled out. A conductor asked to check tickets, but aside from that, it was seamless and the half-hour passed quickly.

If you want to catch some amazing views of the sea (you actually hug it for a bit of the train ride!), sit on the left side by the window. You will get some killer views of it! 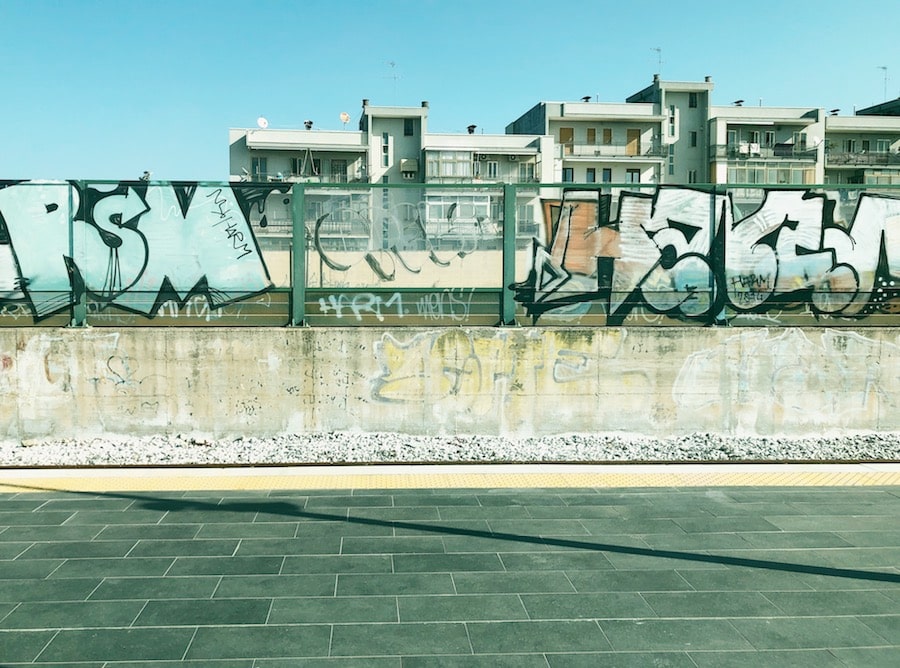 The Polignano a Mare railway station is small and has nothing to it. The station sits on the Ancona to Lecce line that runs along the Adriatic coast.

Trenitalia operates all trains coming through there.

Is there Luggage Storage at Polignano a Mare Station?

Nope. There is nothing there. The train station is tiny and doesn’t even have a café. I had to haul my bag around Polignano a Mare all day and it was not an easy feat.

I tried to find a hotel that could hold my bag, but it was a sleepy day and nothing was open since it is the off-season.

Is there Food at Polignano a Mare Station?

No, there is nothing there. Literally. Nothing.

But, if you walk out of the train station and start heading into the Old Town, you will see this café almost immediately on the left side and it looked really cool and had quite a few patrons.

This may be a good option if you want a quick coffee or drink before your train.

Getting Back to Bari from Polignano a Mare

Getting back is pretty much the same routine but opposite. The only difference is that the Polignano a Mare train station is small and you will need to use the actual machines to purchase a ticket.

The platform that will lead you back to Bari is accessible via the underground passage (or ‘subway’ as it is referred to). Make sure you validate, or stamp, your ticket before getting onto the train.

Final Thoughts on my Trip from Bari to Polignano a Mare

I hope you have a chance to take this ride as it means you’re visiting Puglia in the first place!