Are you looking for the cutest and best small towns in Iceland? This guide to the top villages in Iceland has you covered!

We take you through some of the most charming Icelandic small towns – spanning the entire island!

Let us know if we missed any Icelandic villages and towns in this guide in the comments. Thanks!

Despite being the oldest settlement in Iceland, Húsavík is actually more notable for its 23 species of whale and whale watching tours.

It is a coastal town in the Þingeyjarsýsla district and is often mentioned as the Whale Capital of Iceland.

The Skjálfandi Bay is where the whale-watching tours will lead you to, with several companies in Húsavík sailing out regularly to see the creatures.

There is the local Whale Museum, where you can also see displays of skeletons of a blue whale, reaching a length of 22 meters!

You can learn about other animals and species in the Bay, such as the puffins and their large colonies.

There are an abundance of other museums in Húsavík, with a natural history museum, a maritime museum, a regional history and district museum, a folk museum, art galleries, photograph archives, and district archives, all presented in the cultural center that locals call the Museum House.

Siglufjörður is the name of a small fishing town and fjord on the northern coast of Iceland.

The sea plays a vital role in Icelandic culture, especially in Siglufjörður, the capital of herring fishing in the North Atlantic, and the economic foundation of the town.

Its Herring Era Museum is one of the largest in Iceland on the topics of industry and seafaring.

The museum is divided into three houses, where you can learn about fishing, the salting station, and national processing processes, and see the displays of numerous vessels from the 1950s.

At the old Grana factory, you can learn about how herring was transformed into not only meals but oil.

Pertaining to culture, the Folk Music Center is a cultural center where recordings of revived old songs, tvisongur tunes, chants, playing of the langspil, and nursery rhymes can be heard.

The town is surrounded by steep valleys and mountains along with the Héðinsfjarðarvatn lake.

Stykkisholmur is described in the Laxdæla Saga, an early work of European literature with a powerful female protagonist by the name of Guðrún Ósvífrsdóttir, who became Iceland’s first nun and was buried at a small mountain nearby, the Helgafell.

The town is in the northern area of the Snæfellsnes peninsula, where the fishing grounds of Breiðafjörður can be found. The fishing industry and tourism drive the economy of the town.

The natural beauty of the region can be further explored at the Snæfellsjökull National Park and  Mount Kirkjufell.

The iconic pyramid-like shape of Mount Kirkjufell and its nearby Kirkjufellsfoss waterfall is a popular destination for nature enthusiasts visiting the country.

Meanwhile, Snæfellsjökull is one of three national parks in the country, with the same names as its volcano and glacier.

The small town is referred to as a cultural center despite its size due to its Norwegian House museum and Volcano Museum.

Vík is a seafront village along the coast in southern Iceland, and the largest settlement in its vicinity. It is south of the Katla volcano, which is covered by the Mýrdalsjökull glacier shadowing over the city.

Its economy runs on tourism and travel along with its local retail center. Its natural scenery is a great place to start when exploring the town.

Find basalt columns and black pebbles on its Reynisfjara beach and offshore rock formations at Reynisdrangar.

Additionally, to the west you’ll find the Reynisfjall Tuff Mountain, which is a home for numerous varieties of seabirds, such as puffins, in its cliffs.

Nearby, you’ll also be directed to the Dyrhólaey peninsula, with its own rock formations, and even a large rock arch.

To the east are the Myrdalur Cliffs. The town is the only seaside village without a harbor, thus causing the development of its trading and farming industry.

In east Iceland is a long fjord protectively wrapping around a town of the same name – Seyðisfjörður. It is known for being one of the most prosperous towns in its region, due to the natural benefits of its protective fjord.

Both mountains are part of the popular seven-peak hike throughout Iceland. There is also the Skalanes Nature Reserve, a popular exploration hub for scientists and conservationists.

The reserve is 17 kilometers away from town, covers 1,200 hectares, and houses a variety of animal and plant life.

There are more than 90 archaeological sites, including a Norwegian whaling operation, that you can check out at the at Vestdalseyri on the Seyðisfjörður coast.

In the southeastern part of Iceland is Höfn, a small fishing town situated near the Hornafjörður fjord.

It is the second largest town in the region and grants clear views of the Vatnajökull Glacier, the largest in Europe, located in a National Park of the same name.

Beneath the glacier, there are also hidden ice caves and the Hvannadalshnjúkur – Iceland’s tallest mountain.

The town can be found in the few natural harbors on the southern coast of Iceland with flat and beachy coasts, which is uncharacteristic of the rest of the country, hence the name Höfn, which means ‘harbor’ in Icelandic.

The town rests on its own peninsula, and is often visited by tourists as a checkpoint or a rest stop before or after visiting the East Fjords, Vatnajökull National Park, Snæfell Mountain, Mount Vestrahorn, Diamond Beach, Vestrahorn Mountain, the Jökulsárlón Glacier Lagoon, and anywhere along Iceland’s ring road.

On the north coast of the Snæfellsnes Peninsula in western Iceland is Grundarfjörður, a small town finding its livelihood and economy through its natural harbors, fishing, and fish processing industries.

The ship traffic is a consequence of its ideal harbors, but the sights of various vessels are a part of the everyday lives of the townspeople.

The town has more recently developed its tourism industry as over the years it had begun to appear on the radar of visitors due to its proximity to impressive mountain ranges and scenic coasts on the Snæfellsnes Peninsula.

Kirkjufell Mountain and Kirkjufellsfoss Waterfall are the emblems of the town, towering over the sea dramatically with steep peaks and a three-pronged waterfall beside it.

For more views of the town, there is a photography exhibition at Bæringsstofa, which showcases a collection of pictures taken by Bærings Cecilsson, a native of the town.

Near the West Fjords, you’ll find Ísafjörður, the largest settlement in the region, which is often referred to as its capital. The dramatic landscapes of the town are in thanks to the numerous fjords wrapped around it.

It’s situated on the fjord Skutulsfjörður, which is a part of the larger Ísafjarðardjúp.

The old town was built by fishermen and fishing merchants, with wooden houses lined with tin roofs dating back to the 18th and 19th centuries.

Explore more of the town’s maritime history and examine its collection of old fishing boats at the Westfjords Heritage Museum.

There are archives and photographs available also at the cultural center, which was once the old hospital of the town.

Nearby are the cliffs of Látrabjarg, the waterfalls of Dynjandi, the Hornstrandir Nature Reserve, Rauðasandur sandy beach, and the continuously expanding Drangajökull glacier.

Djupivogur is a small coastal village in East Iceland, burrowed near the Hamarsfjörður fjord on the  Búlandsnes peninsula.

Fishing is the primary driver behind the town’s economy until the tourism industry has grown in recent years, introducing hotels, cafes, restaurants, shops, and campgrounds around the town.

The Heritage Museum is located in the historic Langabúð, the oldest warehouse of the town, and preserves and dedicates its exhibits to the trading industry of Djupivogur.

In the cultural center, you can also find Ríkarður Jónsson’s sculptures, as well as outdoor sculptures of other artists, such as Sigurður Guðmundsson, in gardens throughout the town.

The sculpted, pyramid-shaped mountain peak of basalt towering at a height of 1069 meters is the Búlandstindur, and according to local folklore, has always been a source of energy for the people.

Off of east Iceland is its largest island Papey, which you can visit with boat tours from the town.

Situated at the mouth of the Eyjafjörður fjord in the northeast of Iceland is Ólafsfjörður; it is connected by a one-lane Múli tunnel on the Eyjafjörður and by the Héðinsfjörður Tunnels to Dalvík and Siglufjörður respectively.

The town’s economy historically thrived on the abundance of herring fishing in the area, and although today there is no herring, fishing still carries the town– along with tourism.

The landscapes of the region create ideal conditions for numerous sporting activities, such as skiing, snowmobiling, horse riding, and even golfing at the 9-hole golf course.

There is a lift to the top of the slopes and mountains at Tindaöxl, which is above the town and poplar with skiers.

The peaceful town also has a geothermal swimming pool where you can relax in after outdoor sporting activities.

Additionally, there is the town’s natural history museum and the beach. Other attractions near the town include the Vatnsnes Peninsula and the Akureyri.

Hvammstangi is the most densely populated village on the Vatnsnes peninsula and is burrowed beside the Miðfjörður.

The village was once an important trading center and is today a popular tourist destination, particularly for seal watching.

In fact, right on the town’s harbor, you’ll find the Icelandic Seal Center, where you can learn about the variety of seal species around Iceland and their significance to the country’s folklore and cultural heritage of the people.

The center’s building also functions as an office for tourist information and directs visitors to available trips and tours for seal watching, sightseeing, and sea angling.

Other than the seal colonies, the seafood restaurants with impressive views overlooking Miðfjörður are popular attractions as well, such as the Sjávarborg, with fresh catch from the ocean and local produce.

In the central town is the Trade Museum Bardúsa, where the commercial past of Hvammstangi is elaborated in displays and presentations.

In western Iceland at the tip of Snæfellsnes peninsula is the small, traditional fishing village of Hellissandur.

Situated on the northwest of the peninsula, the town is situated right beside the Snæfellsjökull National Park, which is famous for the glacier and volcano of the same name.

The town is within view of the national park and is also a popular stop or checkpoint for visitors heading in that direction.

Consequently, accommodations have started to expand and the town’s economy is now growing thanks to tourism.

In the center of the town, you can find the maritime museum, which will inform you about the fishing and trade industry it has had since the 16th century.

You can also see a few centuries-old turf-style homes sprinkled around.

The town is also near the Hellissandur Longwave Radio Mast, which can be seen from a distance as it is one of the tallest structures in Europe.

Did we miss any of the best small towns in Iceland? Let us know your favorite villages in Iceland in the comments! 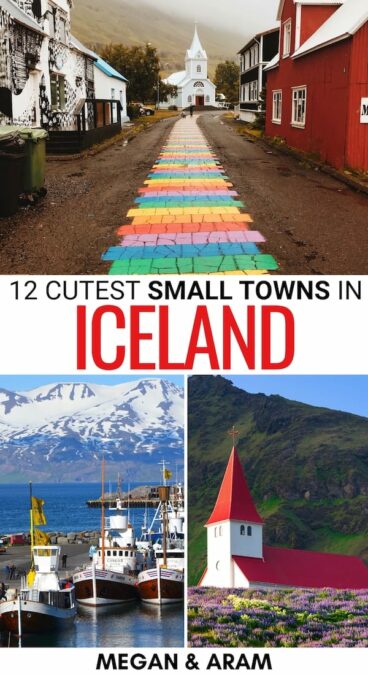