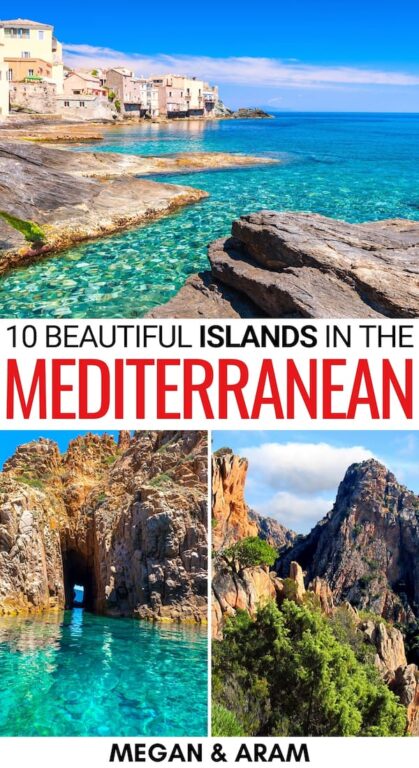 There are islands owned by Albania, Lebanon, Montenegro, and Syria. Some are politically divided, while others are disputed. If you Google islands in the Mediterranean, you will get pages and pages about the “most beautiful islands” or the “most gorgeous islands to visit.”

And while yes, many of these islands are simply stunning – with crystal clear waters, white-sand beaches, colorful harbor towns, and lush green hillsides – there are also islands worth visiting for the history and culture.

Many of the islands have been ruled over by more than three empires. The Greeks, Romans, Byzantines, Venetians, French, Ottomans, and others all held sway over the small sea between Europe and Africa.

Here are 10 beautiful and interesting Mediterranean islands to visit when the world reopens!

Best Islands in the Mediterranean

Sicily is the island that mainland Italy’s boot shape looks like it’s kicking. It’s the largest of Mediterranean islands and one of five autonomous Italian regions (out of 20 regions).

The capital of Sicily is Palermo and its most prominent landmark is Mount Etna, the tallest active volcano in Europe. Human habitation in Sicily dates back to 12,000 BCE, and by 750 BCE the Greeks had moved in, absorbing the native tribes.

Their most important colony was Syracuse, which was the center of several political wars around the turn of the millennium. The Roman Empire took over, then the Visigoths and Byzantines.

Today, visitors to the island can see evidence of these rulers as well as later ones: the Arabs, Normans, Aragons, and finally Italy under the reunification in the 19th century.

Sicily has a typical Mediterranean climate and fertile soil due to volcano eruptions, so it’s no surprise that the island is well known for its lemons, olives, artichokes, and wine.

It is the third-largest producer of Italian wine, after Veneto and Emilia Romagna. Travelers to Sicily can arrive by plane, into either Catania or Palermo, or by boat from Naples, Genoa, or Tunisia, and Malta.

Sicily has seven UNESCO World Heritage Sites, including Valle dei Templi, Necropolis of Pantalica, Mt Etna, and Palermo. There are numerous archaeological sites on the island as well.

Most visitors stay in either Palermo, Taormina, or Catania, and there are a number of five-star hotel brands opening on the island (2020-2022). Sicily is home to many of the best hidden gems in Italy.

Sardinia is the second-largest island in the Mediterranean and is located off the western coast of Italy. It is one of the autonomous regions of Italy, like Sicily.

Sardinia has been inhabited since the Paleolithic era and its most notable civilization is the Nuragic, who is known for building stone fortresses around the island. Today, over 7,000 of them still remain. 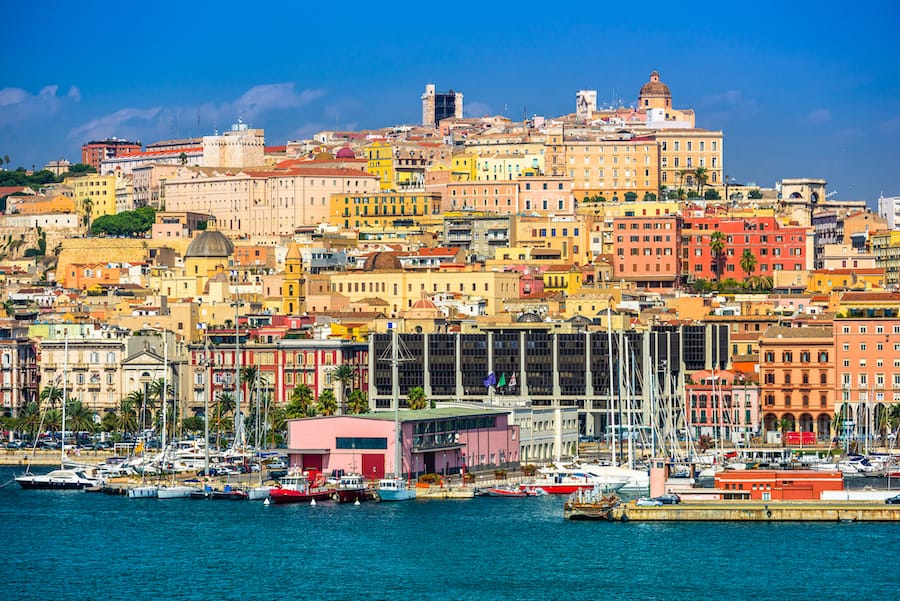 The island was conquered by Carthage and later Rome and ruled in the Middle Ages by the Byzantines and then the Aragons. It is one of the most beautiful and untouched islands in the Mediterranean, and often considered a micro-continent for its variety of ecosystems.

It also has one of the highest densities of sheep in the world, on par with the UK and New Zealand. It is a heavily agricultural island. Visitors can arrive by plane or boat at a number of airports and ferry ports. There is a rail system on the island, and the road network is very good.

Cagliari is one of the main cities, and the most visited town on the island by tourists. It is known for its cathedral.

Santorini is one of the most well-known Mediterranean islands. Its iconic whitewashed buildings and blue roofs are among the most recognizable images of Greece.

The volcanic island is located in the Aegean. It was the site of the Minoan eruption, one of the most devastating volcanic eruptions in history. This is widely considered to be the cause of the collapse of the Minoan empire, as well as the basis for the mythical Atlantis.

There are many things to do on the island, including the popular Santorini jet ski tours that go to the volcano and various beaches. 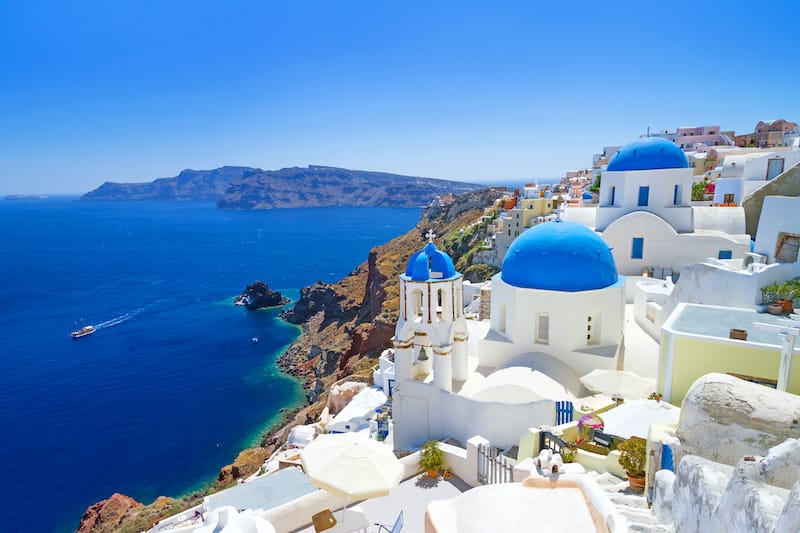 Santorini is a romantic island and features on many an island-hopping honeymoon itinerary. You can fly or take a ferry to Santorini from mainland Greece or various islands across the Aegean.

Your Santorini itinerary should include wine tasting, sunset viewing, and boat tours but you can also explore Akrotiri, one of the largest Minoan sites outside of Crete. There are plenty of things to do in Santorini in winter if you’re looking to visit in the off-season, as well!

Malta is an island country located between Sicily, Libya, and Tunisia. It’s the world’s 10th smallest country and has the smallest national capital in the EU.

Malta hasn’t been inhabited as long as some of the other islands on this list; it was first inhabited in approximately 5900 BCE. Its location in the center of the Mediterranean has long given it huge strategic importance as a naval base, first by the Phoenicians and Carthaginians, then Romans, Greeks, Normans, and onward through the British. 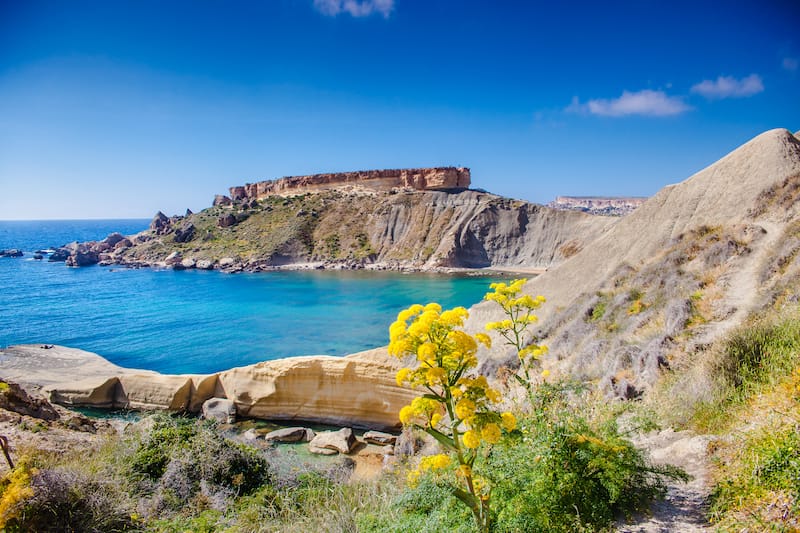 It remained a British colony until 1964 when it became independent, however, it didn’t become a republic until 1974. The country has been associated with the Knights of St John, or the Knights Hospitaller because Valletta was one of their headquarters during the Crusades.

Visitors to Malta go for the plethora of megalithic temples, which are some of the oldest free-standing structures in the world, the cultural attractions in the capital city of Valletta and her rich history, and the warm Mediterranean climate.

Majorca, or Mallorca, is the largest Balearic Island, an autonomous Spanish archipelago off the northeast coast of Spain.

Palma is the capital of both Majorca and of the islands. Majorca and Ibiza (see below) are two of the most popular tourist destinations in Spain, with warm, sunny summers and cool, dry winters.

Neolithic settlements have been discovered on the islands, but the majority of archaeological ruins come from the Phoenicians, Romans, and Muslims.

While the island has these and other cultural aspects, Majorca is definitely a beach destination. Cyclists also enjoy coming here for the diverse mountainous roads and temperate climate. There are thousands of hotel rooms in Majorca, including some stunning five-star hotels.

Ibiza, the third largest Balearic Island, is a haven for nightlife and EDM lovers (electronic dance music). It was settled by the Phoenicians in the 7th century BCE.

While much of the tourism stems from its party scene, a lot of Ibiza are registered UNESCO World Heritage Sites. The Renaissance walls of the Old Town and the first Phoenician settlement at Sa Caleta are two.

Along with the nearby Formentera, Ibiza is one of the “Pine Islands”

Cyprus is the third largest island in the Mediterranean after Sicily and Sardinia. It is located on the far eastern side of the sea, south of Turkey and north of Egypt. The earliest human activity here dates to the 10th millennium BCE, to the Neolithic settlement of Khirokitia.

The Mycenaeans came in the 2nd millennium. Cyprus was later occupied by Eastern Mediterranean powers, including the Assyrians, Egyptians, and Persians. In more modern times, it was ruled by the French, Venetians, and Ottomans, until it fell under the UK administration.

Visitors to Cyprus can visit the ruins of Kourion, a Greco-Roman site, the Mosque of Lala Mustafa Pasha, and the Kition archaeological site, among many others.

Cyprus also has wonderful hiking trails and small traditional villages in the mountains.

Crete is the fifth-largest island in the Mediterranean, but the largest of the Greek islands. It is located 160km south of Greece and southwest of Turkey and is one of the best places to visit in Greece.

Crete has a varied landscape, from sandy beaches to rugged mountains. It was settled by Neolithic tribes who became the Minoans; Crete became part of Greece only in 1913! It has a temperate climate and remains fairly consistent year-round. 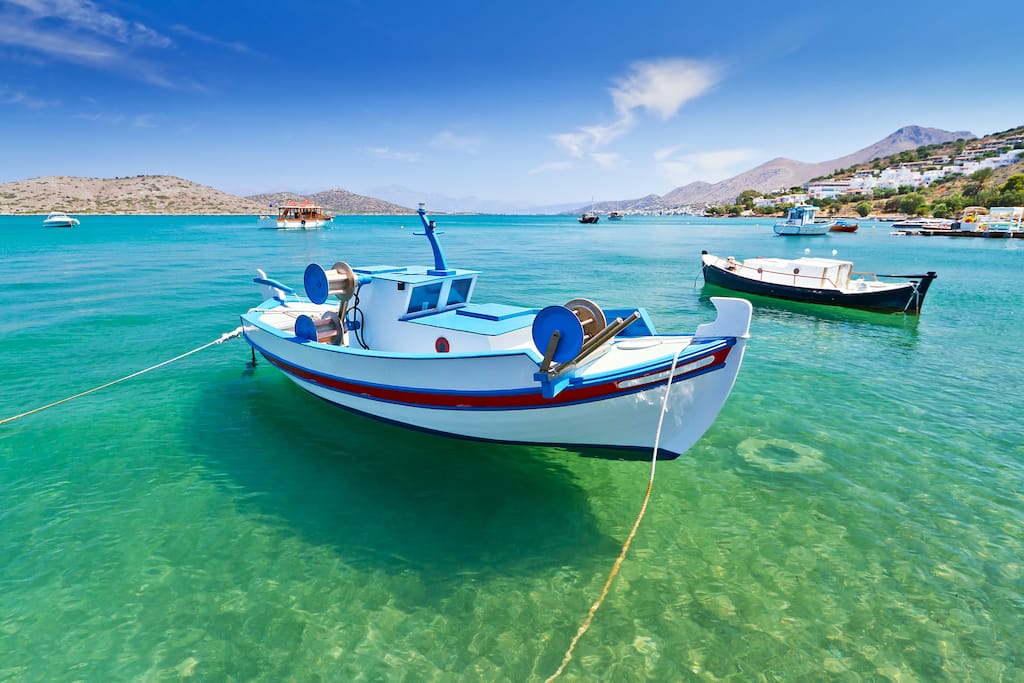 Visitors to Crete shouldn’t miss Chania, the capital of the western region. This was an important Minoan city, as well as an important city-state during the later Classical period. The core is Neolithic, but much of the remaining modern architecture is Venetian.

It is a lively place to stay. Knossos, the Palace of King Minos, is one of the most important archaeological ruins in Greece and must be visited and on every Crete itinerary.

Crete also offers some of the best hikes in Greece, such as Samaria Gorge and Richtis Gorge.

Corsica is a large island just north of Sardinia, between the French and Italian mainlands. Once ruled by the Republic of Genoa, it is now a territory of France.

It is possibly most famous for its native son, Napoleon Bonaparte, who was exiled to Elba, which lies between Corsica and Italy. His family home, Maison Bonaparte, is now a museum.

The island has been occupied since the Mesolithic era, occupied by the Carthaginians, Greeks, and Etruscans, and incorporated into the Roman Empire. By the Middle Ages it was under the republic of Pisa, hence much of its Tuscan features.

It’s a very mountainous island and was once considered wild and remote against much of its colonizers. Visitors can explore the Parc Naturel Regional de Corse, which protects rare plant and animal species.

Corsica is well connected to both France and Italy by car ferry. Visitors can also arrive by plane.

Capri is a small island on the southern edge of the Gulf of Naples, in Campania, Italy. It has been a resort island since the Roman Empire when it was the favored retreat of the Roman Emperors.

During the 19th century, Capri attracted artists, writers, and celebrities, leading to more widely known fame. Capri is known for the towns that hug its steep cliffs, grottos, and sea caves – the most popular attraction is the Blue Grotto.

It is a very popular place to visit especially in the summer months. It’s very easy to get to Capri for a day trip from Sorrento or Naples, however, if you can stay on the island you will see a different side of it.

These are just some of the islands you can visit in the Mediterranean. They offer a wide mix of history, culture, culinary delights, and more.

Let us know your favorite Mediterranean islands in the comments!

BIO: Chrysoula is a travel blogger born and raised in Athens, Greece with a professional background in Tourism and Marketing. Through the pages of Greece Travel Ideas, she wants to help visitors make the most of their trip to Greece and introduce them to the Greek culture and traditions. 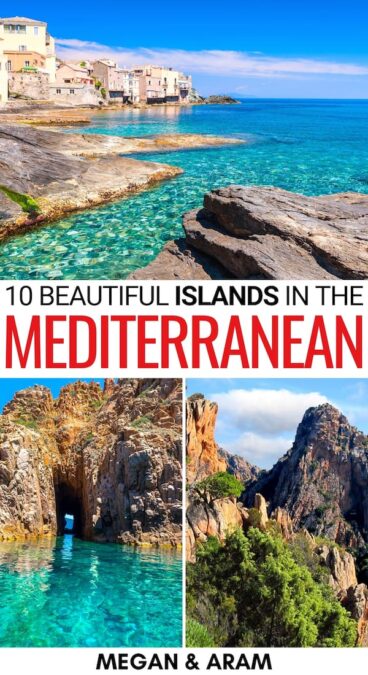