Some things that Maine is known for are lobster, gorgeous coastal towns, and the state’s beautiful lighthouses. These are some of the gorgeous lighthouses in Maine (and some facts about each)!

Did we miss any amazing Maine lighthouses worth visiting or learning about? Let us know in the comments! Thanks!

Two of the first lighthouse in Maine were built in Two Lights State Park  (hence the name!) and they were both built-in 1828. From 1780 until the 1990s, there were over 98 ships that sank along this coastline so lighthouses are a crucial structure here!

When visiting the Cape Elizabeth Lighthouse, you can also check out the ‘Into the Lantern: A Lighthouse Experience’ exhibit in nearby Bath (about 45 miles north). It can be found at the Maine Maritime Museum.

When visiting, you will be greeted with a full-scale replica of the lighthouse located in Two Lights State Park and its tower lantern room.  That is where you’ll find the Fresnel lens. The lighthouse had two towers – a western one with a fixed beam and the eastern one.

Bass Harbor Head Lighthouse is another Maine lighthouse that is essential to visit.

Located in Acadia National Park, one of the most-visited parks in the US, on Mount Desert Island, the entrance is located at Blue Hill Bay and it has become one of the icons of the Maine national park.

Its history dates back to 1855 and it received its Fresnel lens in 1902 from French company Henry-Lepaute. It is still used today. Presently, the lighthouse is a private residence but tourists can check it out and get close to the bell and the light by means of a concrete path.

The bell sits at the base of the tower. Bass Harbor Head Light Station is on the National Register of Historic Places and is a great place to visit if you’re visiting Acadia in winter, summer, or shoulder season!

Located in southern Maine, the 24-foot Marshall Point Lighthouse is a beauty that was built in 1858 (at the same time the keeper’s house, gardens, and museum were built).

Once there, you can tour the Maine lighthouse and then hike over to the picturesque fishing village of Port Clyde.

Port Clyde provides an opportunity to indulge in fresh lobster and other varieties of seafood before you hop on a cruise with the Monhegan Boat Line to view some of Maine’s most incredible sea life such as harbor seals, minke whales, and even puffins!

Back to the lighthouse – when there, you will see a light tower on the property that is accessible via a walkway as well as a summer kitchen and the original oil house.

There is also a small room with research findings and memorabilia like photographs and documents detailing the area’s history.

Located in idyllic Cape Neddick in York, the famous Cape Neddick Lighthouse is also referred to as the Nubble Lighthouse. It is one of the most famous lighthouses in Maine and definitely a place worthy of checking out and putting on your Maine itinerary!

The historic lighthouse was built in 1879 and is situated on a small islet just a few hundred feet off of the coastline of York. Back in the day, the lighthouse was connected to the mainland via a cable car that would take supplies to and from the lighthouse keeper.

On the island, you will find a stunning Victorian keeper’s house that somewhat resembles a gingerbread house.

If you’re seeking views of the lighthouse, you can drive over to Sohier Park to some great lookout points or you can book a scenic cruise with Finestkind in order to view the tower from the water as well as some of the charming coastal homes that are located nearby.

The famous Owls Head Lighthouse is one of the most iconic in Maine and can be found at the entrance of Rockland Harbor in the cozy Maine coastal town of Owls Head (in Knox County).

It is located in the western Penobscot Bay and the lighthouse is owned by the US Coast Guard and is licensed to the American Lighthouse Federation.

When you arrive, you will find a spacious parking lot that is situated close to the lighthouse and the grounds are, in fact, open to the public.

You can view the lighthouse from afar or even near the parking lot and you’ll have an incredible vantage point high above the rocky, Maine coast and you will also get to see some of the islands in the distance. You will also get to check out Maine’s windjammer fleet.

While visiting Owls Head, you need to check out the gorgeous downtown area as well as the harbor as you stroll along the almost 1-mile Rockland Breakwater path to the Maine lighthouse.

Located a mere 67 miles northeast of Portland, the Pemaquid Point Lighthouse is one of the most iconic in the state… so much that it can even be found on the Maine US quarter!

With a tower dating back to 1827, Pemaquid Point was built by order of John Quincy Adams. The lighthouse remains in operation today.

When visiting the original keeper’s house, you will find a museum called the Fishermens Museum there. It gives a bit of background into the history of the lighthouse and the nearby area.

Another cool thing about the Pemaquid Lighthouse is that it has lodging options in the apartment upstairs!

Other things to do when visiting are to check out the art gallery, keeper’s house, an educational learning center, and have a picnic in the gardens surrounding it.

Merely 5 miles south of Portland’s downtown area is the prolific Portland Head Lighthouse, the oldest lighthouse in Maine. It is situated on the rocky coastline of Fort Williams State Park, a famous New England state park.

First illuminated in 1791, sixteen whale oil lamps lit it up to help the ships in the area.  Today, you can visit this beautiful lighthouse and the museum that is housed in the original keeper’s quarters.

In addition, you can also spend time strolling the gardens and old fort structures where you can get some incredible ocean views!

When you’re done, grab a lobster roll at the Bite Into Maine lobster truck nearby! It is a famous truck that many critics consider to have the best lobster roll in Maine!

Built by the order of George Washington in 1795, the Seguin Island Lighthouse is the second oldest in Maine and one of the tallest. It is renowned for its 9-foot tall first-order Fresnel lens that illuminates over 20 nautical miles away!

This lighthouse is not as accessible as many others in Maine as it is only accessible by private boat or ferry.

You can catch the ferry there from Popham Beach which will also give you a guided tour of the lighthouse once you reach Seguin Island. There are hiking trails and beaches on the 64-acre island, and it really is one of the best places to visit in Maine!

The incredible Spring Point Ledge Lighthouse is the only caisson-style tower in the United States that visitors can actually visit on foot!

Situated in a mesmerizing location at the end of a 950-foot breakwater, you will have a chance to see mind-blowing views over the Casco Bay Islands and the Portland Harbor.

The lighthouse had an important role in guiding ships home, naturally, but it also really helped give warning to incoming ships about the dangerous waters in and around the Portland Harbor.

The West Quoddy Head Lighthouse is another one of the most popular Maine lighthouses and it is one of the few candy-cane striped ones left in the USA. Commissioned by President Thomas Jefferson in 1808, it has become one of the iconic symbols of Maine over the years!

West Quoddy Head Lighthouse is located in the small town of Lubec which is, more or less, the easternmost point of the country.  You can even see Grand Manan Island (New Brunswick, Canada) in the distance!

Some things to do when visiting West Quoddy Head Lighthouse is to stay in one of the buildings that once served as a life-saving station, explore the lighthouse, stroll the grounds, or head to the Visitor Center to learn more about the legendary place.

Did we miss any of the best lighthouses in Maine on this list? Let us know which Maine lighthouses are your favorites in the comments! Thanks! 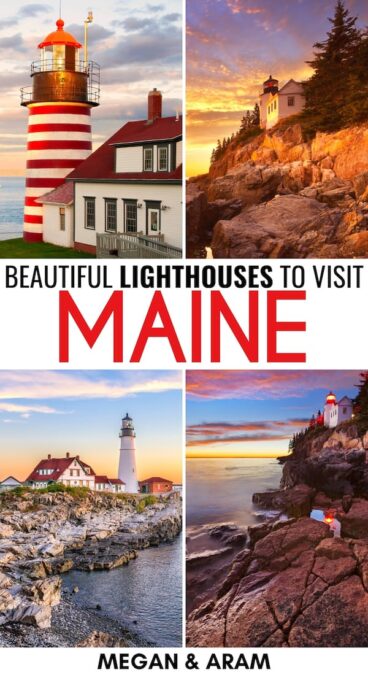 3 thoughts on “10 Iconic (and Beautiful!) Lighthouses in Maine”