It’s no secret that Florida has some of the most famous beaches in the world. And at many of these beaches, you will find some of the prettiest lighthouses in Florida.

This guide covers the best Florida lighthouses, where you can find them, and a bit of information about each (including their history)! Did we miss your favorite FL lighthouse? Let us know in the comments!

The St. Augustine Lighthouse dates all the way back to the 1500s when a watchtower was built there by the Spanish. It is the oldest permanent navigation aid in the United States and all of North America.

The Florida lighthouse rises around 165 feet above sea level and has 219 steps and 8 landings and is open to the public. Aside from the lighthouse itself, the grounds feature the 1876 Keeper’s House, a gift shop, and some nature trails.

The Lighthouse Keeper’s Tour is an hour-long tour that you can take when you’re visiting the Florida landmark.

You will be able to stroll around the light station, learn about the history of the lighthouse and its keepers, and climb a working lighthouse tower.

One of the most famous lighthouses in Florida’s panhandle is the Pensacola Lighthouse, a 177-step navigation aid that offers insanely gorgeous views over the Gulf Coast.

Built in 1859 and listed on the National Register of Historic Places since 1974, it is located at the Naval Air Station in Pensacola.

At the lighthouse, you will find that the top tower gifts visitors with gorgeous views over Pensacola Pass, three historic forts, the skyline over the city of Pensacola, and an old Navy Yard.

The lighthouse reopened in 2009 on a limited schedule for public tours and since 2011, it has been open 7 days a week!  The Pensacola Lighthouse Association maintains the upkeep as also runs the tours.

Named in honor of Bill Baggs, the editor of the Miami News, the Florida lighthouse sits within a park that has over a mile of sandy beachfront right on the Atlantic and it is a popular spot for snorkeling and swimming.

Aside from hanging out at the beach and admiring the lighthouse, there are several activities you can do in the FL state park. Some of the most popular activities are boating, fishing, canoeing, hiking, biking, and wildlife viewing.

In addition, you will also find many places to go picnicking or camping (including youth campsites). There is a Visitor Center to welcome guests, as well as a museum to educate them.  This is a great stop on a Southern Florida road trip!

You can find it situated between the Cape Canaveral Lighthouse and the St. Augustine one and it became a National Historic Landmark in 1998. It is open to visitors daily.

The climb is a bit of work and you definitely need to wear good walking shoes to do it – but the views are incredible and well worth the extra effort! Once you reach the top, you will be able to see Daytona Beach and the northern bank of the Ponce Inlet.

Jupiter Inlet Lighthouse and Museum is located in Lighthouse Park and is one of the prettiest lighthouses in Florida.

In this structure that was built in 1860, you will find plenty of guided climbing tours in the tower and plenty of other exhibits and attractions in the museum.

Inside the museum, some of the popular exhibits are Five Thousand Years on the Loxahatchee, the Oil House, and the Keeper’s Workshop. You will also find a Nautical Museum gift shop there.

One of the top things to do when visiting this Florida landmark is to check out the programs hosted there such as the sunset tours and special events.

Other fantastic things to do there are to take advantage of the many hiking trails and the observation tower that is located on the northern side of Beach Road.  Don’t miss the chance to picnic, relax in nature, or watch the boats go by, too!

The Jupiter Inlet Lighthouse is part of the federally designated Jupiter Lighthouse Outstanding Nature Area, and it is also on the National Register of Historic Places.

St. George Lighthouse is a 72-foot-tall brick lighthouse that was initially built on (what is not called) Little St. George Island. Built in 1852 at the center of the island, it has withstood so many natural disasters and hurricanes, wars, and a lot of erosion.

However, on October 21, 2005, the lighthouse finally collapsed. Fortunately, there is a replica that was built and is completely functional. You will also find a replica of the original keeper’s house where a gift shop and museum are housed today.

You can visit the lighthouse throughout the year as it is open to the public, but the hours of operation may vary depending on the season. You will find many of the best beach towns in Florida around here!

The Amelia Island Lighthouse was built in 1838 and is the oldest lighthouse in Florida that survived without major rebuilding over the years. You can find the lighthouse at 215 O’Hagen Lane toward the northern part of Amelia Island.

Another notable feature is that it is the only existing Florida lighthouse with a spiral staircase (made of granite).  It truly is iconic and a must-visit when you’re on Amelia Island!

The exterior of the lighthouse is white and it was one of two lighthouses that remain that was built by a famous builder named Winslow Lewis. It also has a lantern room that is painted black, which makes it stand out more!

Periodically, you will find the lighthouse open for tours where you can learn a lot more about its history, construction, and importance to the local area. The structure has a cast-iron roof with a finial on its exterior and its interior is rustic with wooden floors, ceilings, and paneling.

One of the most famous places to visit near the lighthouse is Cap’s Place, a historic and well-known restaurant in Lighthouse Point.  You will also find a 60-foot long boathouse near the inlet that is worth checking out.

The Key West Lighthouse was built in 1825 and is located at 938 Whitehead Street in Key West, Florida.

Renowned for being the USA’s 15th oldest lighthouse, it was decommissioned in 1969 but opened to the public later in 1989. It is worth the visit if you’re heading to Key West in winter or in summer!

The Florida lighthouse is a historic landmark in Key West and charges a small admission fee for those interested in visiting.

In order to get the epic views it is known for, you will need to climb up 88 tiny steps to the tower.

Owned by the United States Space Force, it is used primarily by the US Coast Guard as a navigation aid for the surrounding waters.  The lighthouse’s construction finished in 1847 and is open to visitors today. You should visit the nearby museum to book a tour.

Did we miss any of the best lighthouses in Florida? Please let us know the most beautiful Florida lighthouses you have been to or recommend visiting in the comments. Thanks! 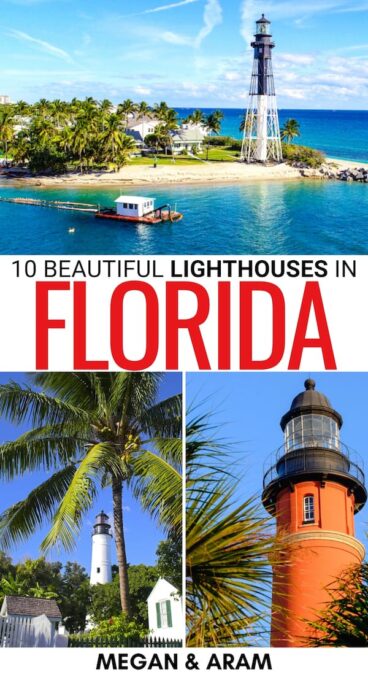