I have been on to the Estonian craft beer scene for years.  In Frankfurt, we actually get some decent craft beer from Estonia.  And, as someone who has traveled to Tallinn quite a few times, I have had ample opportunity to enjoy craft beer in Tallinn (and even over in Tartu)!

When I knew I was going back to Tallinn this past March with Visit Estonia, I was certain that I needed to do some proper beer research and create a guide to where to find craft beer in Tallinn.

The guides out there were far from conclusive and I get so many people coming to my site for beer information for the Baltics that it was only right to explore Tallinn the proper way… by (craft beer) bar hopping.

So, without further ado, this is my guide to where to drink craft beer in Tallinn, Estonia.  I hope you find yourself in Tallinn at some point or even somewhere in the country (cycling in Estonia is a great option as the land is flat and pure).

If there are any new places you recommend or if I left a gem off of this list, please leave a comment and let me know so I can check it out next time I am in Tallinn!  Thanks!

I absolutely loved this bar and bottle shop.  Located in the new and hip part of Tallinn, Rotermanni Kvartal (Rotermann City), it was my refuge (multiple times) on extremely cold days.

Taptap Tallinn was located extremely close to where we were staying and we just loved the atmosphere and beer.  The shop has around 600 bottles for sale as well as 6 beers on draft.

They even have their own crowler machine- how cool is that (can the Frankfurt craft beer bars please get on board!?)

The decor inside of Taptap is modern, yet comfortable.  It varies from the Hanseatic city’s usual bars and pubs that tourists frequent.  The two-roomed bottle shop has basically every Estonian beer you could ever wish for (craft beer, that is) and even some internationals.

They have proper glasses (nothing irks me more than when certain craft beers are served in pint glasses that don’t intensify the flavor and aroma) at Taptap and the staff is extremely friendly.

Taptap Tallinn also serves hotdogs as an ode to Danish street food.  I am not a fan of hotdogs, or meat for that matter, but I enjoyed one when I was there one time and it was superb.

If you are vegetarian or vegan, there are so many restaurants in the vicinity so please don’t let this put you off of going into Taptap.

You can find Taptap Tallinn at Rotermanni 2 in the Rotermanni Kvartal in Tallinn.  To find out more information, including their opening hours, check out their Website or Facebook page. 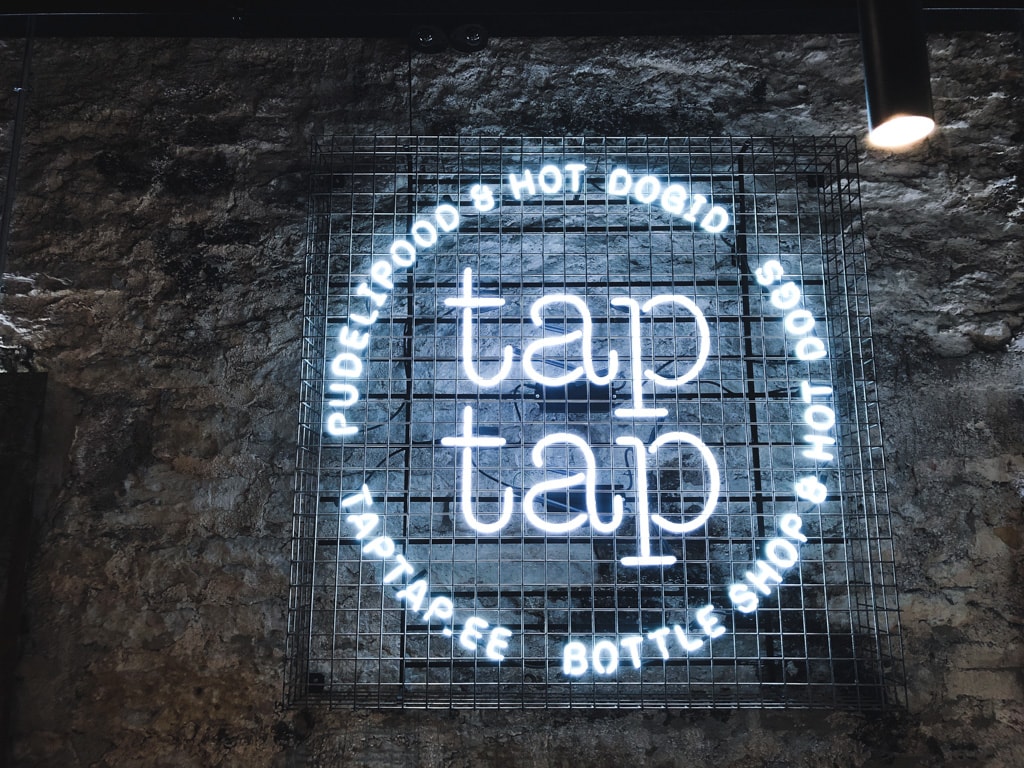 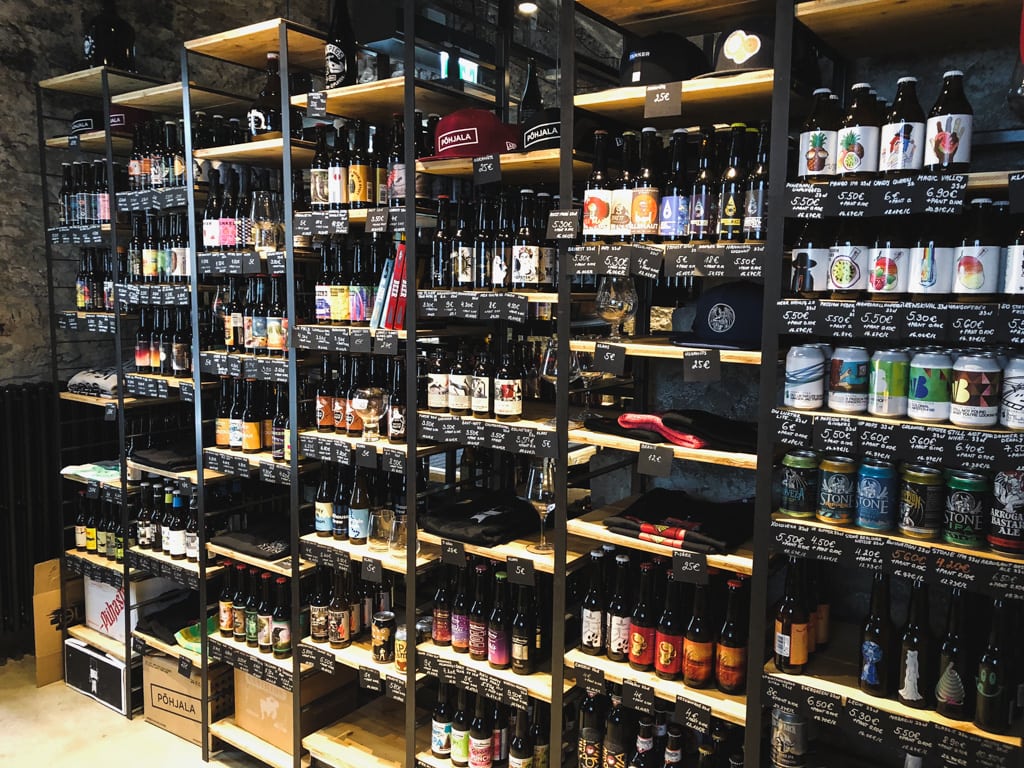 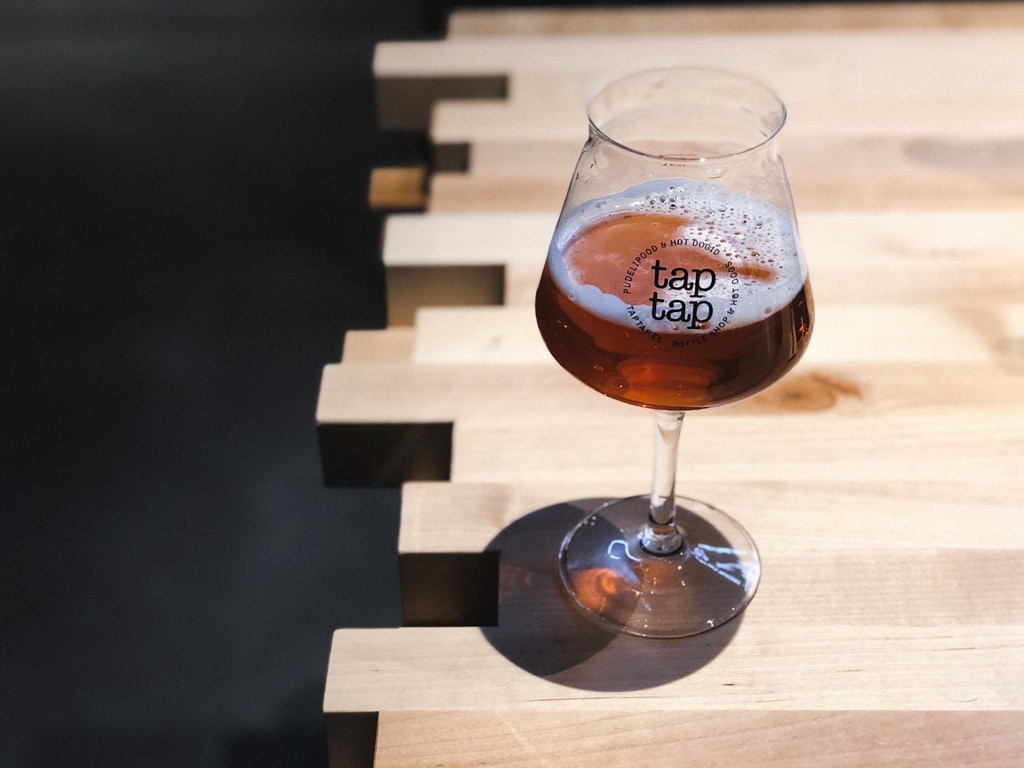 I promise not every establishment on this guide is a bottle shop.  But the fact of the matter is, I love bottle shops.  I could get lost in them for hours, especially when I am on the road.

And there is nothing I love more than a bottle shop that has a few taps and an area to enjoy a couple of beers at.  SIP is just that type of place.

Located in the hip Telliskivi area of Tallinn near Kalamaja, SIP offers craft beer, traditional beer, and a lot of wine to its customers.  One of the best things about the bottle shop and bar is that they offer courses and events almost constantly.

They conduct them in multiple languages, as well.  This is a must-visit for craft beer lovers visiting Tallinn.

You can find SIP Tallinn at Telliskivi 62 in Tallinn.  To find out more, including their opening hours, check out their Website or Facebook page. 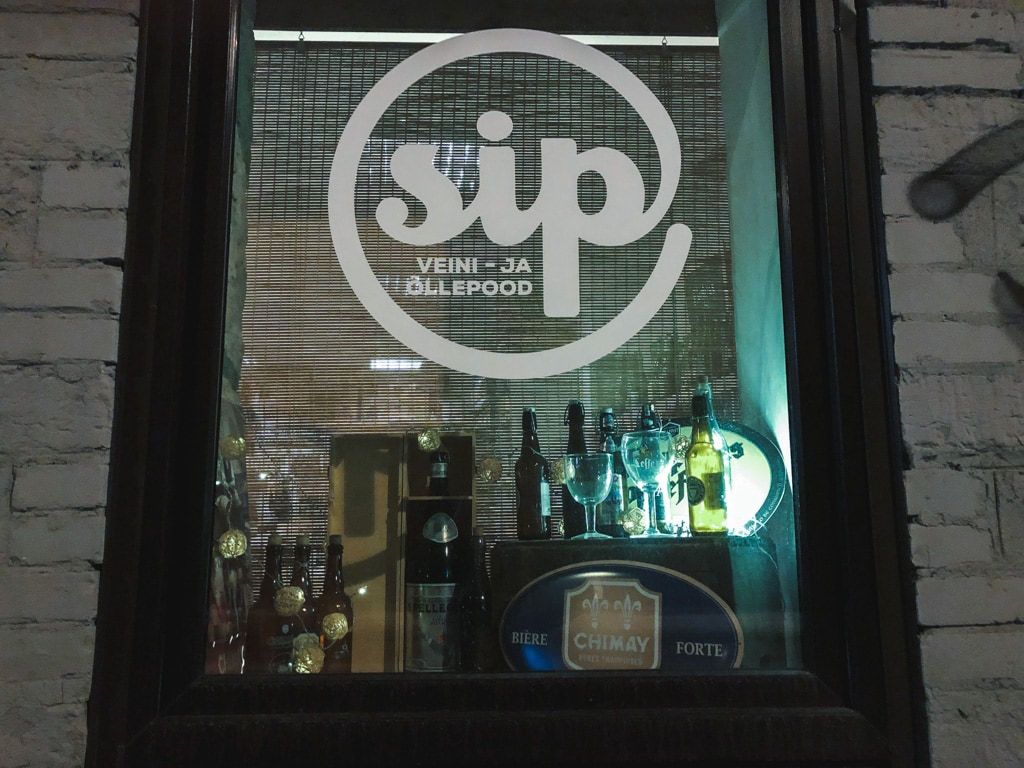 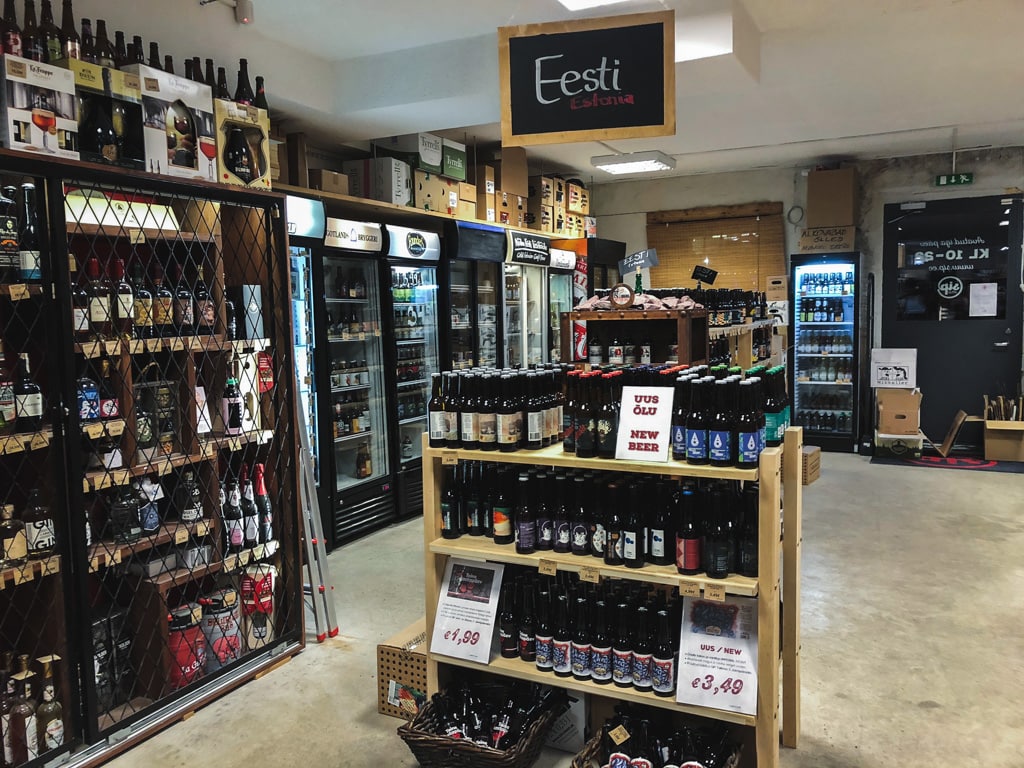 Porgu means ‘hell’ in Estonian.  But this bar was anything but hell when it came to their craft beer selection.  It was massive.  While not all of it was Estonian, they had quite a nice Estonian beer offering.

Porgu is located in the Old Town of Tallinn and is very accessible for those wandering the renowned, medieval city as they become parched.  The bar is underground and kind of like in a cave.

The lighting makes you actually feel like you’re in hell or somewhere dark and Satanic.  But, the beer is so good that it’ll quickly snap you into a heavenly frenzy for more.

You can find Porgu Brasserie at Rüütli 4 in the Tallinn Old Town.  To find out more information, including their opening hours, check out their Website or Facebook page. 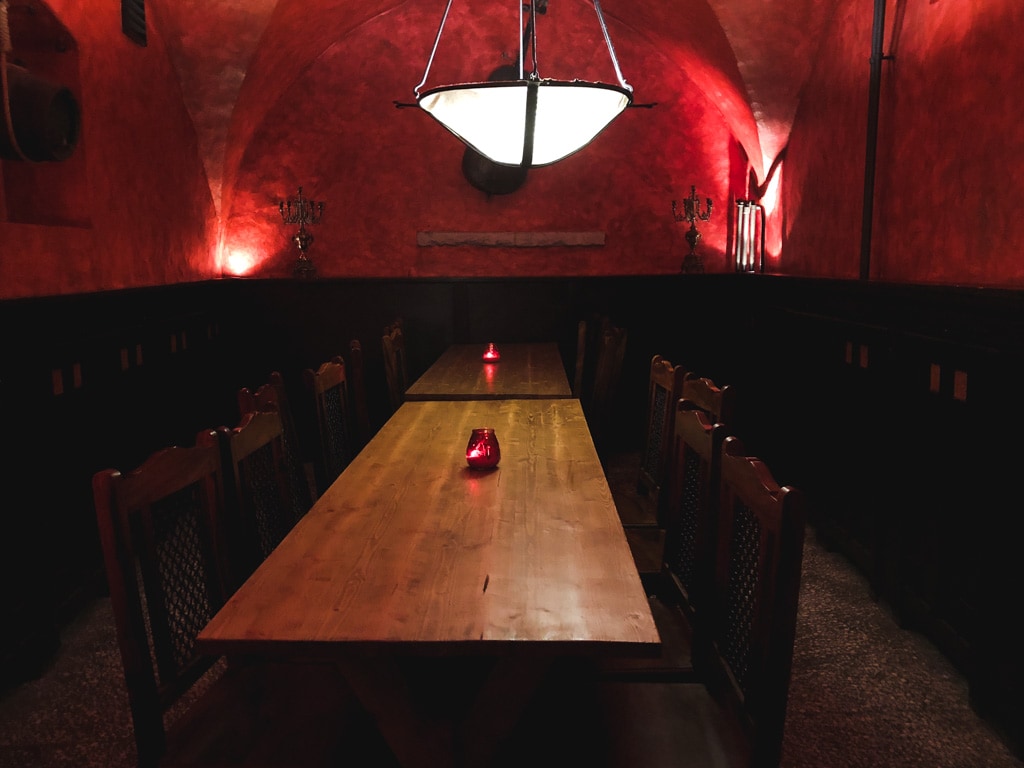 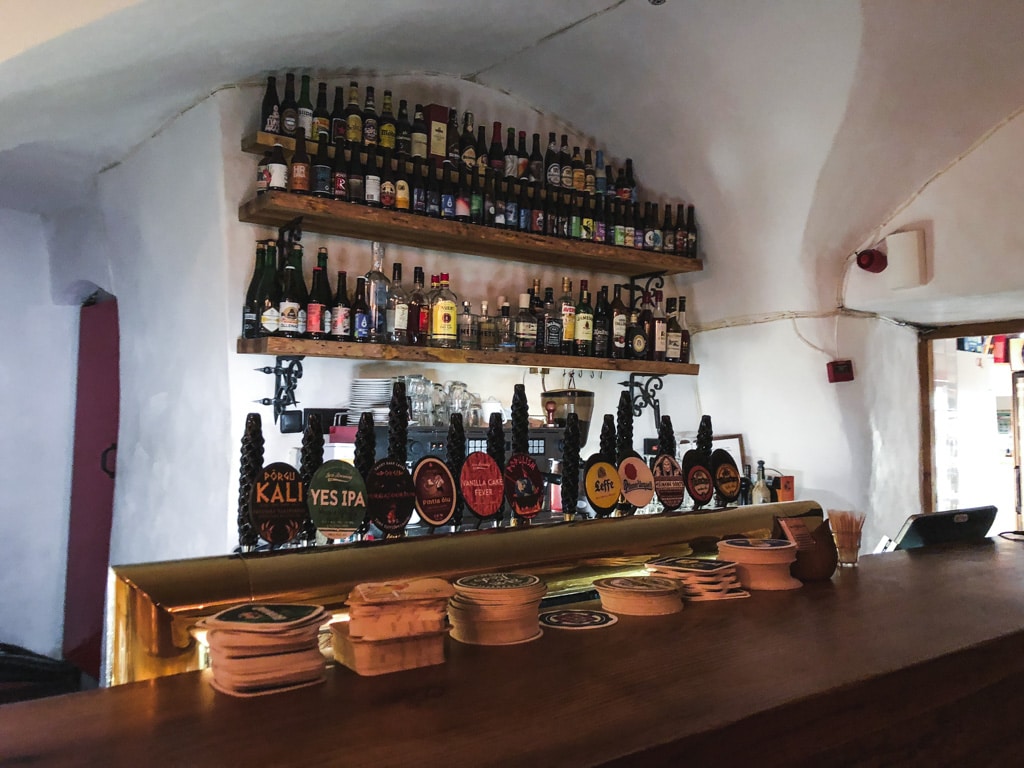 **SKIP THIS PLACE.  The owner and/or person handling social media for them is an online troll and bully.  Wouldn’t waste money going here or on their beers.

One of the most famous Estonian breweries, Pohjala is a brewery that I can easily find outside of Estonia.  Their beers are fairly ubiquitous around Tallinn bars, cafes, and grocery shops, but they really are a phenomenal brewery.

My favorite thing about Pohjala is that their beers often include unexpected ingredients and flavors.

They are constantly collaborating with breweries all over the world to bring their innovative knowledge and skill to other parts of the globe.  Their Forest Series of beers includes several ingredients you wouldn’t expect to find in beer… like spruce tips, pine needles, and lingonberries.

While it seems a bit outlandish to us, the way they incorporate Estonian nature into their beers is something most breweries should be envious of.

Some beers I drank at Speakeasy by Põhjala:  ItaloBänger by Põhjala (Imperial Stout) and Mets by Põhjala (Black IPA).

You can find Speakeasy by Põhjala at Kopli 4 in Tallinn.  To find out more, including their opening hours, check out their Website 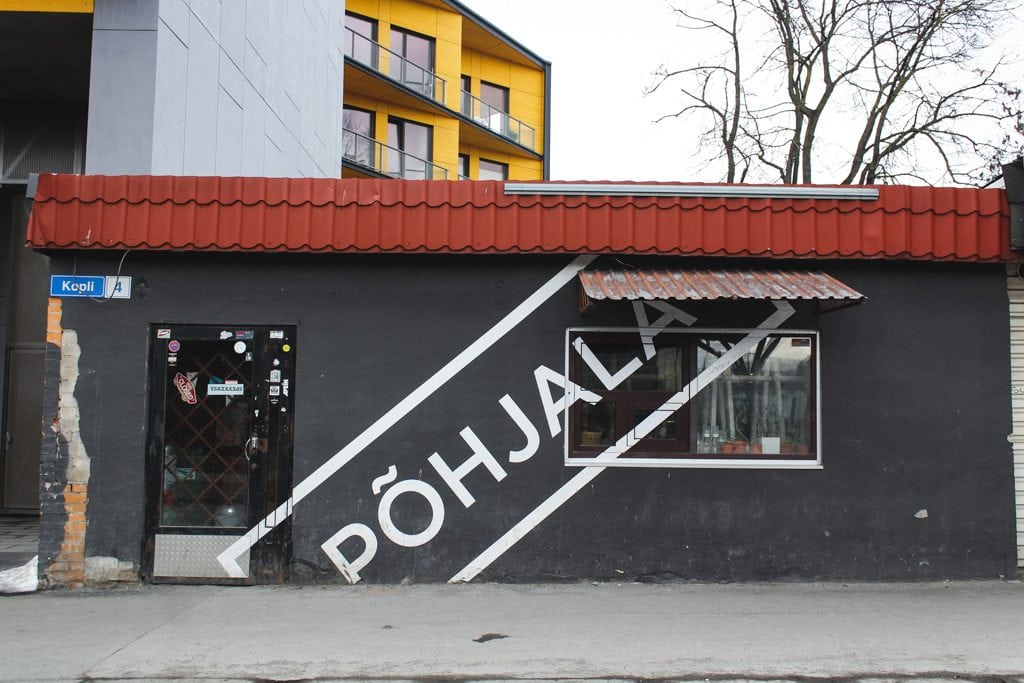 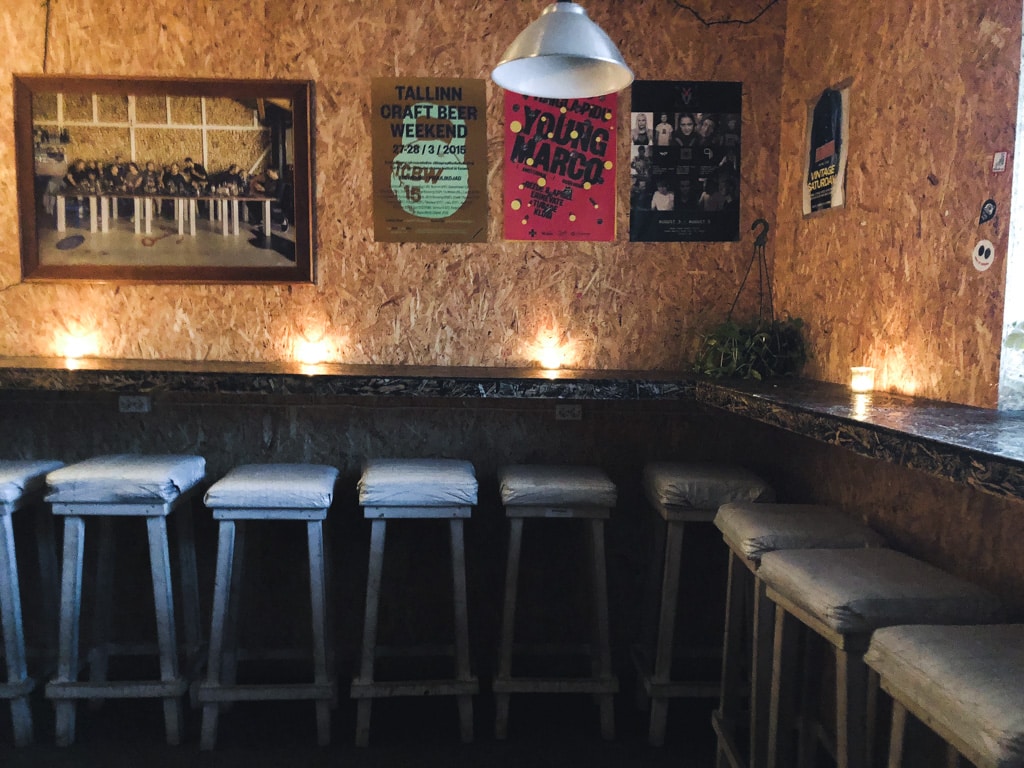 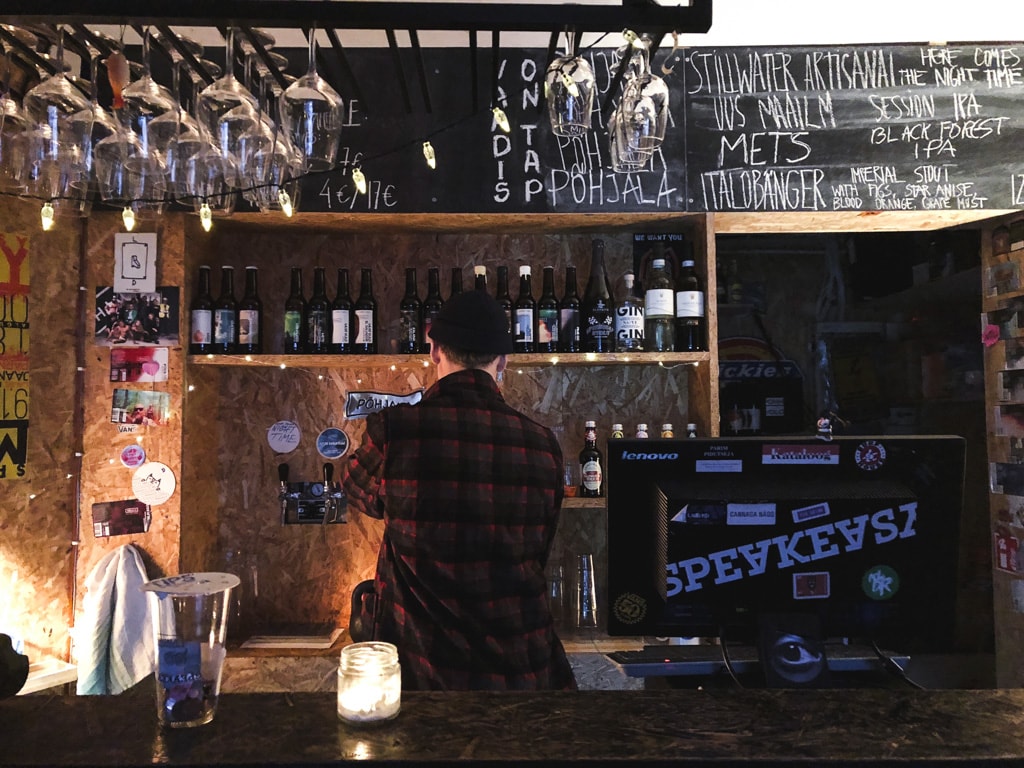 Uba ja Humal is a recently opened/expanded bar, cafe, and bottle shop near the water in Tallinn.  Their selection of beers is massive and their Estonian portfolio is top-notch.

So, who owns this bar?  Tanker Brewery from Harjumaa, Estonia.  Anyone who knows the craft beer scene in Estonia most certainly is familiar with Tanker and its superb branding and beverages.

Tanker was the first brewery in Estonia to make a sour beer and I am obsessed with Sauna Session, their beer made with real birch leaves (I am birch obsessed).

You can find Uba ja Humal at Võrgu 3 near Kalamaja in Tallinn.  To find out more information, including their opening hours, check out their Facebook page. 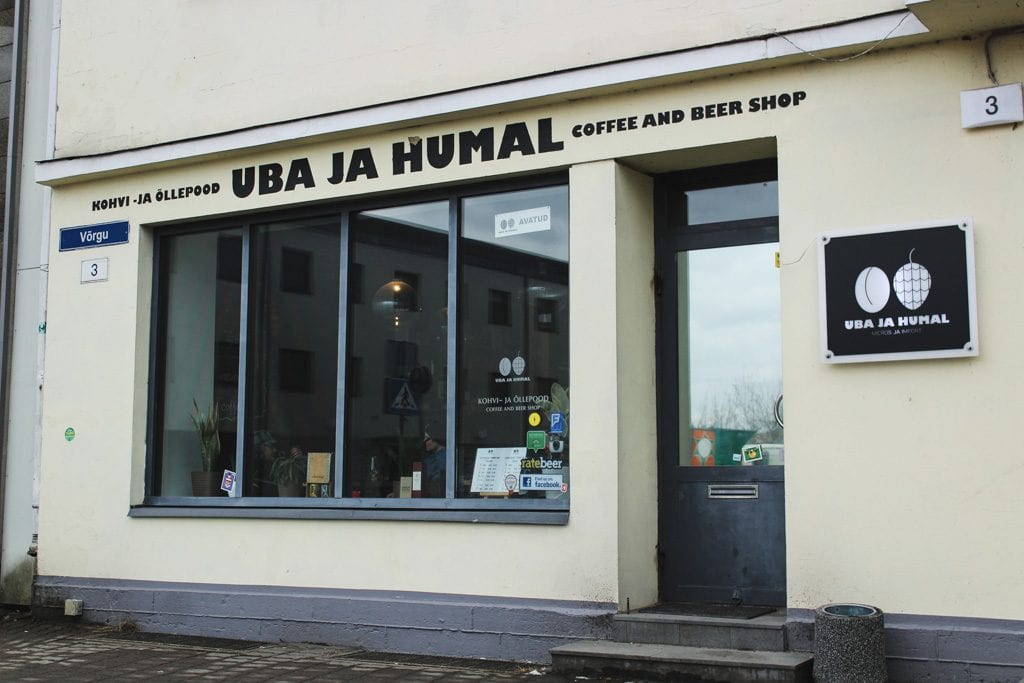 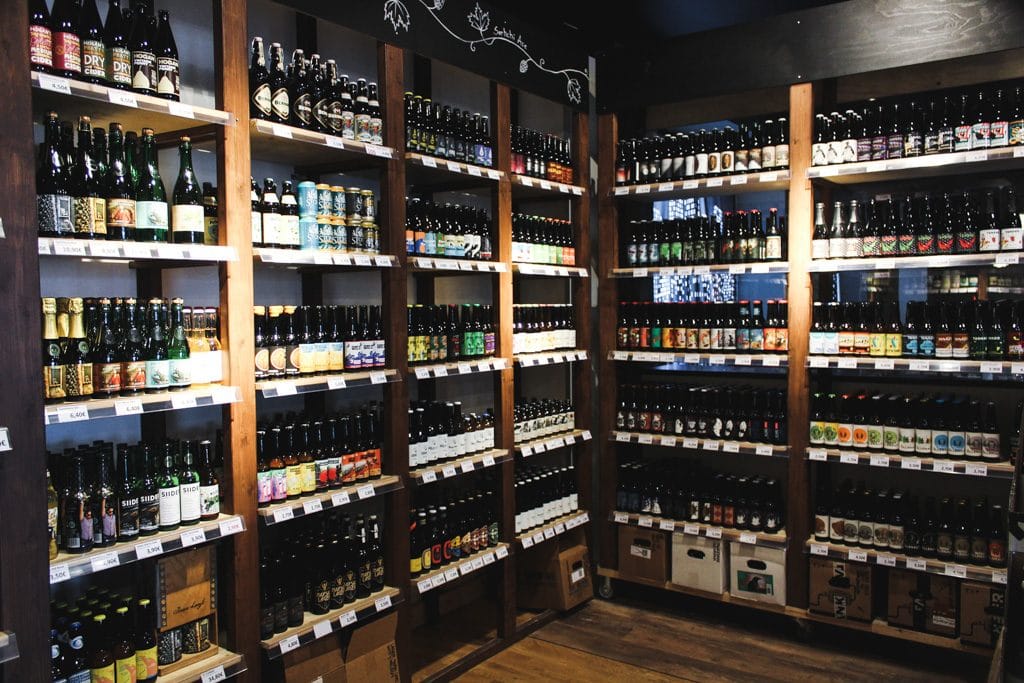 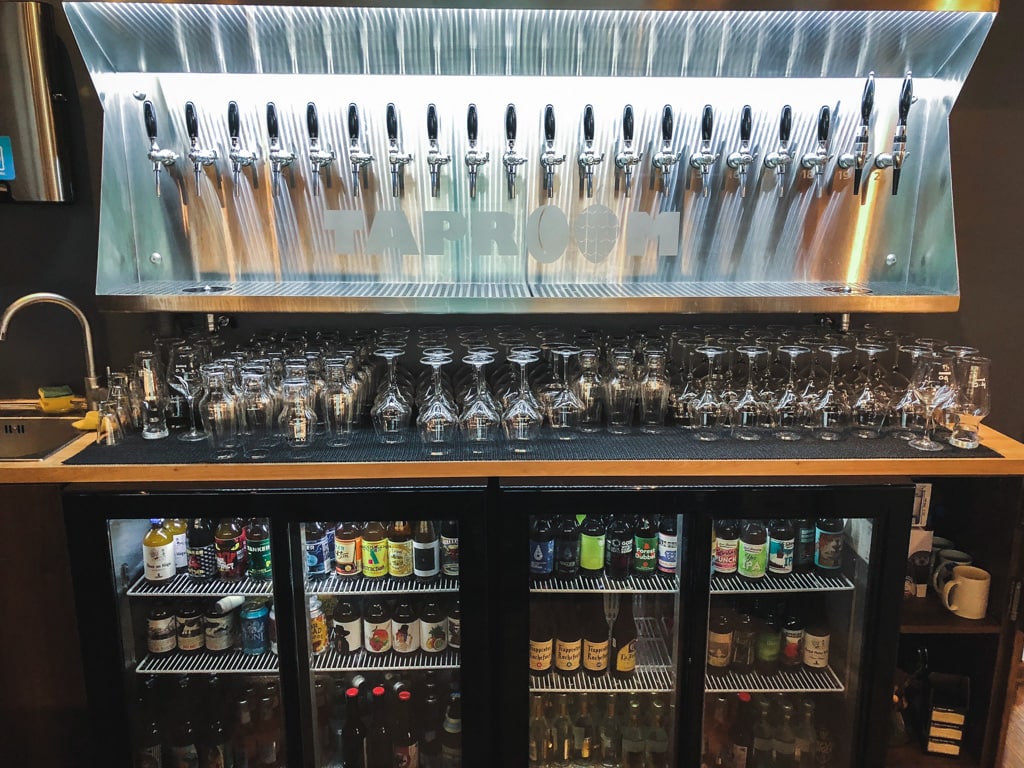 Humalakoda is a brewpub located inside of the newer food hall called Balti Jaama in Tallinn.  They have a small bar downstairs and the main restaurant and brewery upstairs.

We ordered some beers and relaxed early in the day there and never ordered food.  The place seemed very popular and was crowded quite early, but it isn’t difficult to see why!

The staff was extremely friendly and the bartender really knew his beer!  This is a must-visit bar in Tallinn if you are into craft beer!

You can find Humalakoda at Balti Jaama Turg Reisijate 9 inside of Balti Jaama Food Hall in Tallinn.  To find out more, including opening hours, check out their Website or Facebook page. 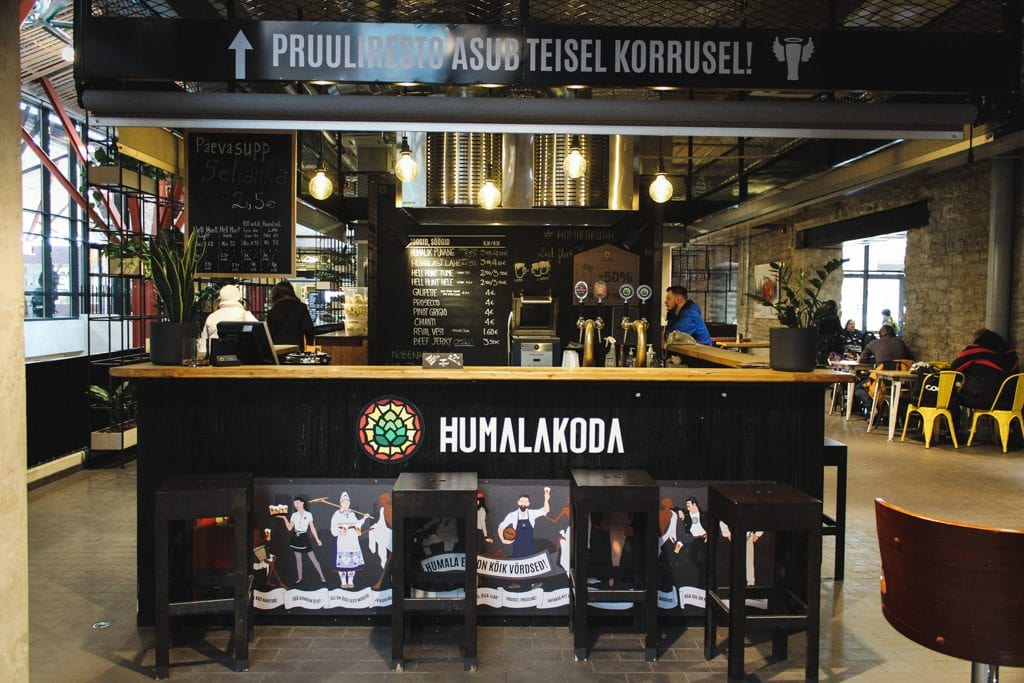 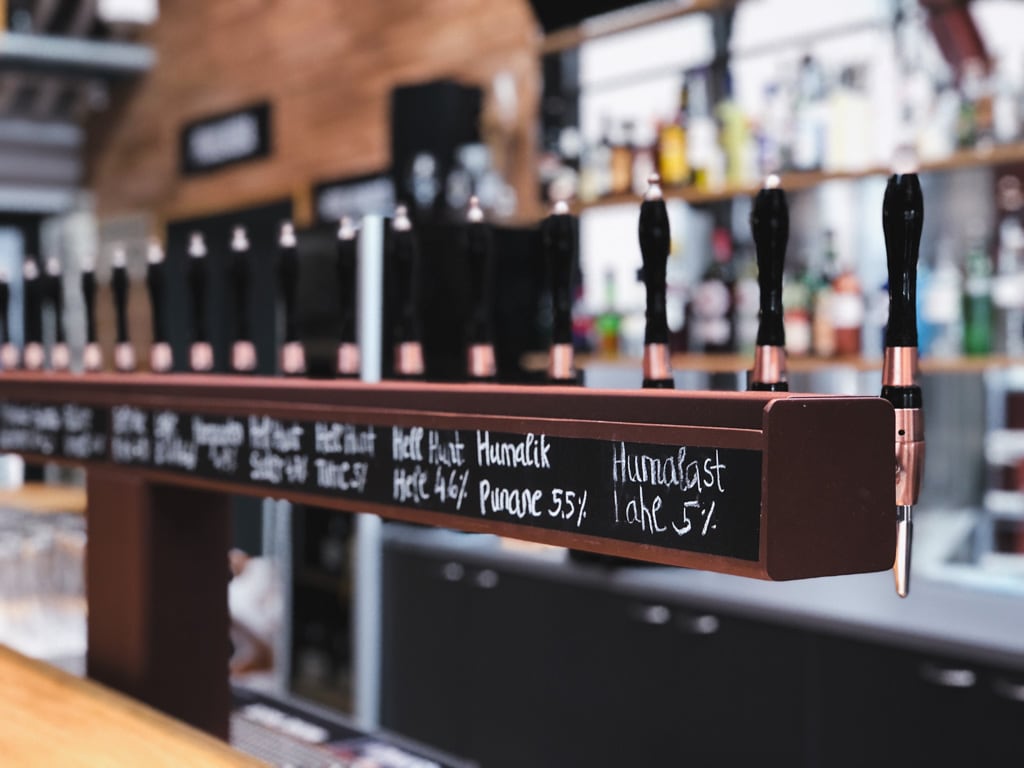 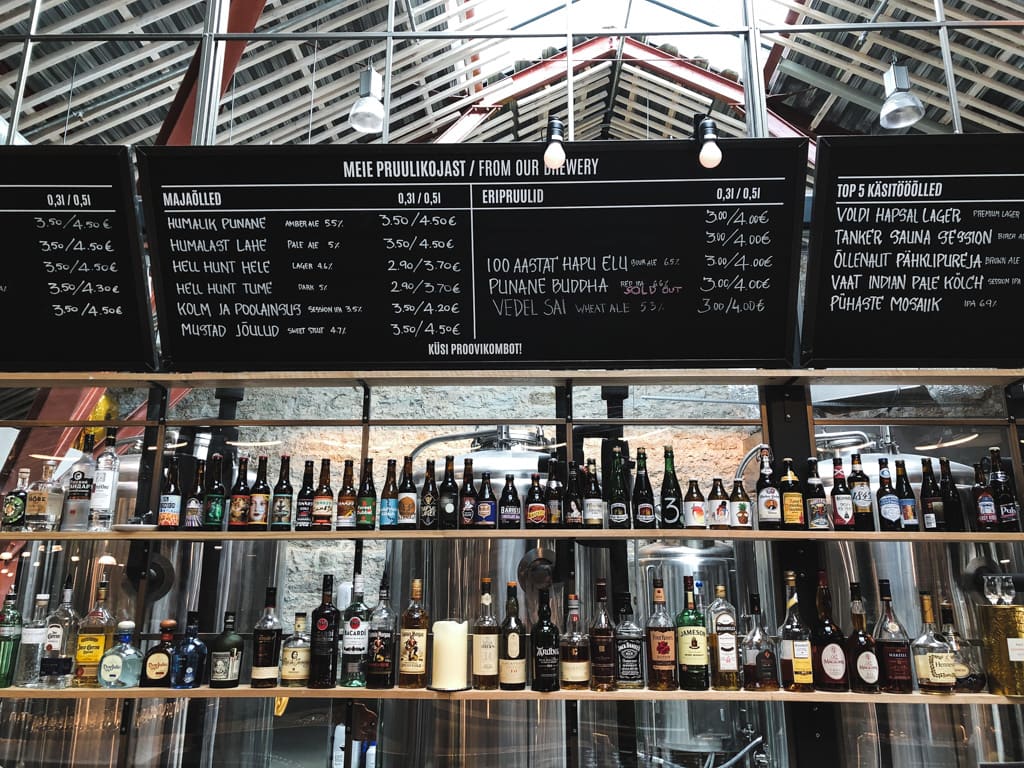 While I was hesitant to go into Brewdog Tallinn at first because I was keen on drinking (mostly) Estonian beers while in Estonia, but… I found out that Brewdog Tallinn is actually owned by the same guy who owns Taptap Tallinn.  And… they are right next door to each other!

Interestingly enough, Brewdog Tallinn had quite the nice selection of Estonian craft beers in bottles and even had some on tap.  We found out that the owner can decide whether or not to have some local brews on tap and whether or not they want to rotate things around.

I think that is really cool and I was happy to support some local brews (okay, and Omnipollo) at Brewdog Tallinn.  Although Brewdog is Scottish, definitely stop here for a good craft beer in Tallinn.

You can find Brewdog Tallinn at Rotermanni 2 in the Rotermanni Kvartal in Tallinn.  To find out more information, including opening hours, check out their Website or Facebook page. 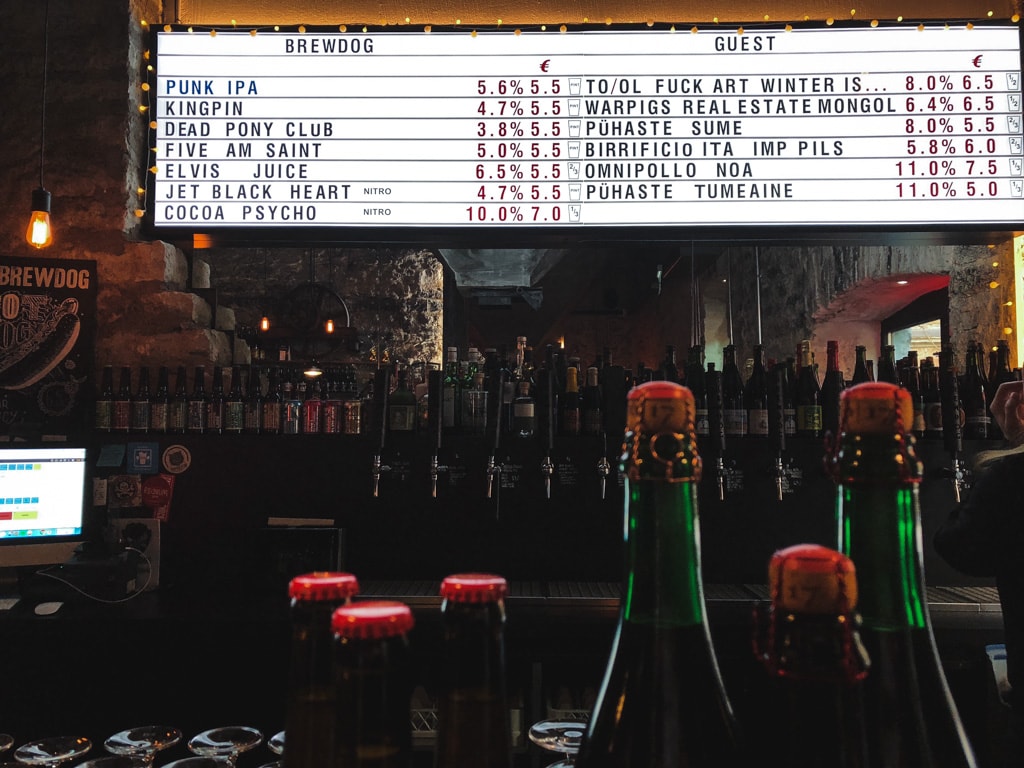 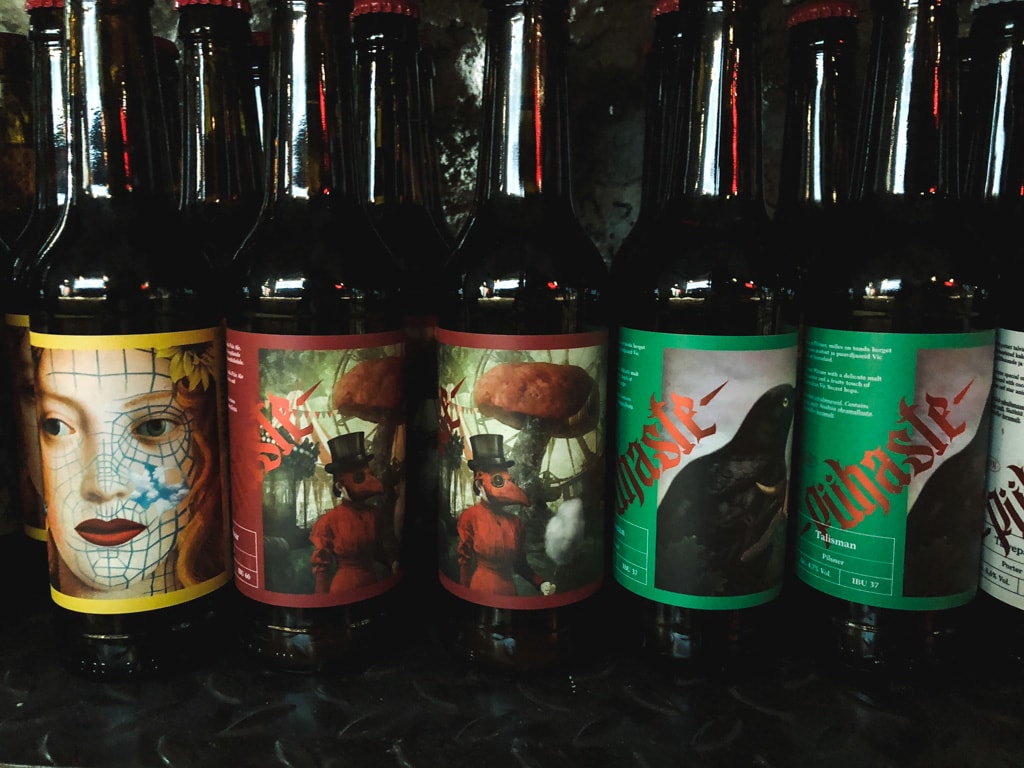 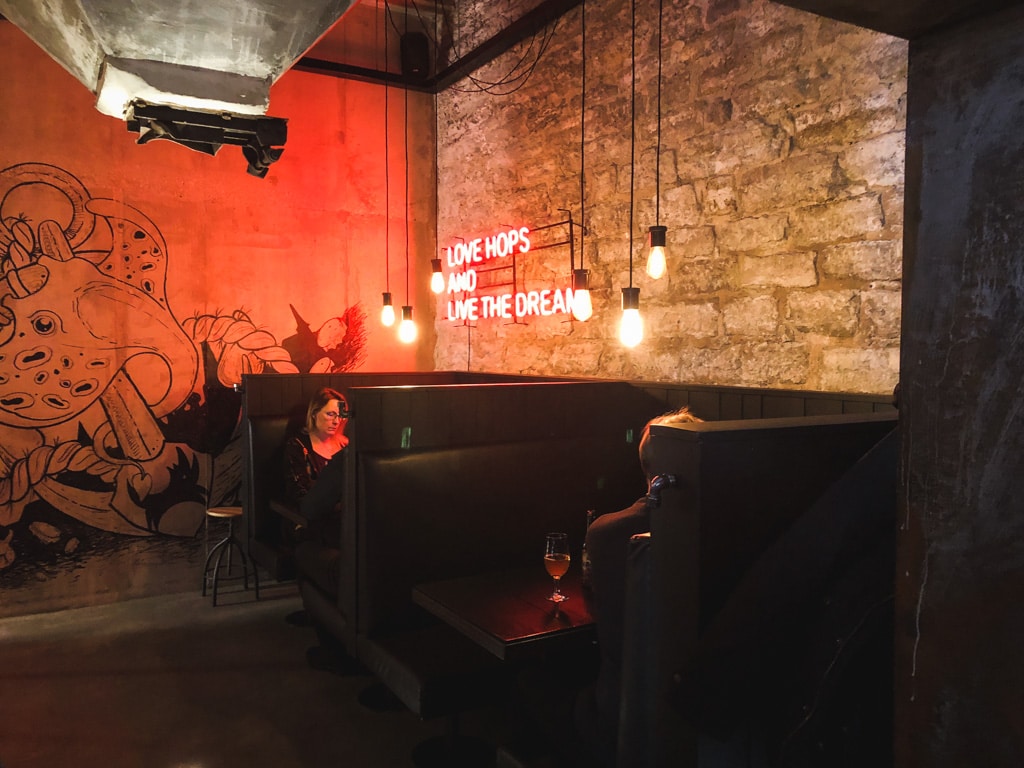 Unfortunately, I didn’t get a chance to go to Pudel.  I ended up quite sick toward the end of my trip and Pudel was the one that got away.  But, they are the ones credited with starting the trend of craft beer in Tallinn, so if you love good beer, this is definitely a can’t-miss place!

This is definitely the first place on my list next time I am in Tallinn, so I hope to update this guide with some notes when that happens!

You can find Pudel Baar at Telliskivi 60A near Kalamaja in Tallinn.  To find out more, including their opening hours, check out their Website or Facebook page.

We saved Koht, which was supposed to be the ‘best’ bar for last.  It is located in the Old Town of Tallinn and is supposed to have a loyal following of customers and the best beer in the city.

Once we arrived, we ended up in a bottle shop.  The lady, who was rude, guided us away and to the actual bar.  Once we entered the bar, it was another ‘cave’ like complex like Porgu or other bars in the Old Town.

The atmosphere was a bit lackluster, but we were there during the early evening, so we didn’t really mind it.  We ordered our drinks and sat at a table near the fireplace, which was not actually on.

No more than five minutes later, the bartender and a customer wearing leather motorcycle gear came over to smoke at the fireplace.  We were so turned off by this that we headed out after that one beer.

This was my least favorite place in the city… but a lot of people like it, so take what I said with a grain of salt.

The beer I drank at Koht:  Hello, Newman by Anderson’s Craft Beer (American IPA).  I had this from a bottle.

You can find Koht at Lai 8 in the Old Town in Tallinn.  To find out more, including their opening hours, check out their Facebook page. 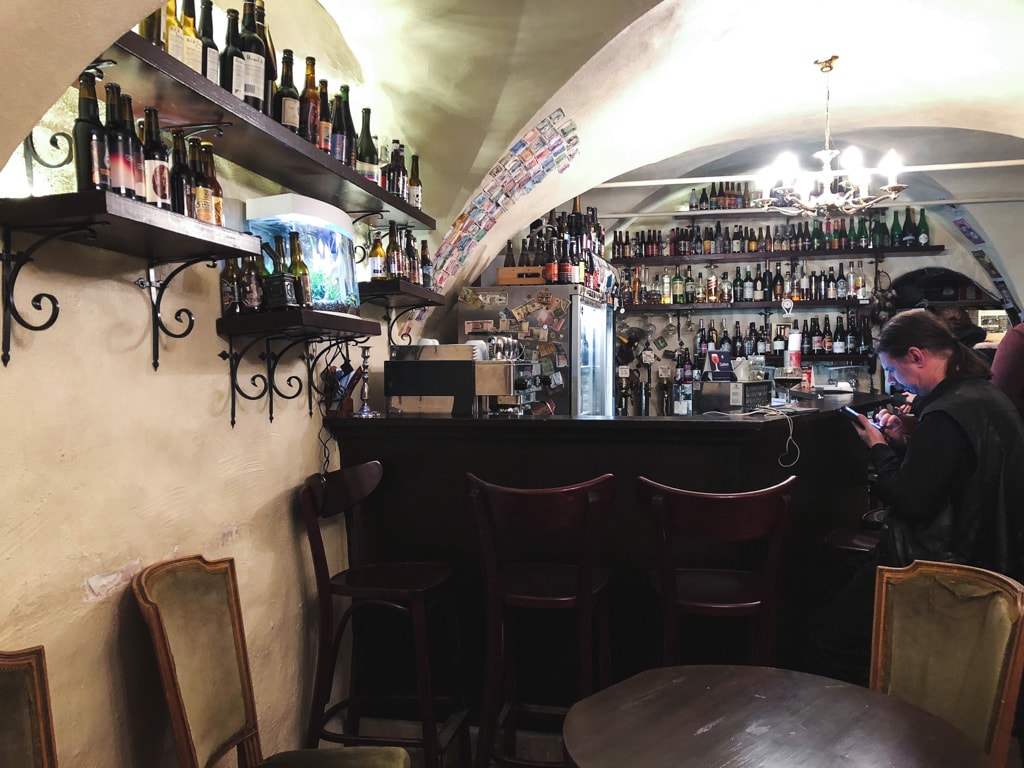 If you have followed any of my other craft beer guides on this blog, you know that I always like to include a restaurant or two that has impeccable food but also serves craft beer.

We were guests at Leib Resto while in Tallinn and we were super excited to find out that they served craft beer alongside their delicious dishes.  They had Estonian beer and it definitely was the perfect pairing to the incredible duck and sunchoke main courses that we ordered.

You can find Leib Resto ja Aed at Uus street 31 in Tallinn.  To find out more, including their opening hours, check out their Website 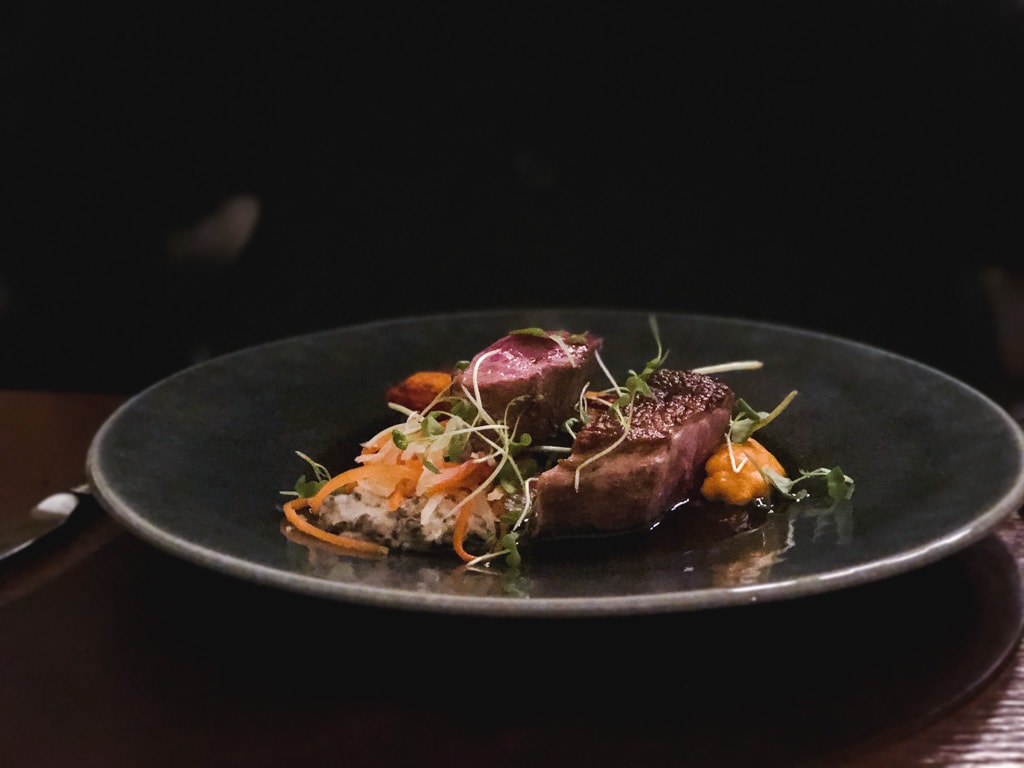 And that is a wrap!  Those were the places where we found a large amount of craft beer in Tallinn.

If you have any suggestions for my next trip or if I missed a place, please drop it in the comments so I can place it on my itinerary next time and get this guide updated!  Thanks and happy drinking!

*Special thanks to Visit Estonia for hosting me in Tallinn in the #storytellersnest.  Was so much fun to make this craft beer guide!

3 thoughts on “Craft Beer in Tallinn: Where to Drink Estonian Beer in the Capital”