There are so many beautiful cities, towns, and parks in Colorado. These are the best small towns in Colorado – from towns along the Santa Fe Trail to ski towns and more!

Did we miss any amazing Colorado small towns that deserve a spot on this list? Let us know in the comments! Thanks!

Can you imagine a town with intangible historical and cultural heritage, which was settled even before Colorado became a state?

Meet Trinidad. Located between the New Mexico border and Denver, on the historic Santa Fe Trail, it is the cradle of Colorado history. Trinidad was founded in 1862 and populated with Spanish and Mexican traders.

Today Trinidad is the southeastern center of art galleries, museums, and old-style Victorian houses. And, it is one of the best small towns in Colorado if you’re looking for an off-the-path experience!

Due to its geographical location, Paonia owns one of the prosperous wine industries in North America. When traveling to the town, you can visit the family-run Stone Cottage Cellars or Azura Cellars & Gallery and enjoy the best wine varieties.

Another great place to visit is Revolution Brewing for lovers of craft beer.

If you want to discover breathtaking views of waterfalls and mountains with never-melting snow peaks, then Lake City is a perfect choice! The town was named after nearby Lake San Cristobal. It is situated in the San Juan Mountains.

This Colorado small town once served as a supply center for the many miners and prospectors flooding into the area.

Nowadays, it’s an ideal place for outdoor adventures attracting hikers, bikers, and anglers from all over the world. In winter, one can go ice skating at Lake City Ski Hill, San Cristobal Lake, or the Lake City Ice Park.

Lake City is surrounded by abandoned mining villages and ghost towns, which offer an unforgettable trip into Colorado history.

Alamosa is located along the Rio Grande in the San Luis Valley, in the highest general agricultural land in the United States.

The city name comes from the Spanish adjective Alamosa, meaning “of cottonwood”, for the cottonwood forests which grow along the Rio Grande and throughout town. It was established in 1878 and quickly became an important rail center.

Alamosa is a famous tourist city with plenty of attractions, including the Great Sand Dunes National Park and Preserve, Colorado Gators Reptile Park, and the Rio Grande Scenic Railroad.

The city is the gateway to the Great Sand Dunes National Park and Preserve and many people stay there when visiting the US national park. It is also a fantastic place for local breweries and farm-to-table cuisine!

Georgetown was established in 1869 during the Pike’s Peak Gold Rush by two brothers, George and David Griffith, prospectors from Kentucky.

The historic CO town is situated high in the Rocky Mountains, near the upper end of the valley of Clear Creek. It was the center of the mining industry and grew rapidly after the discovery of silver.

Today, it has attracted various types of businesses, from banking to trade. It has become a very popular small town in CO to visit for its history and scenery.

Famous sights of the town include Georgetown Loop, the railroad looping up to Silver Plume and back, Georgetown Lake, which makes fishing very popular here, and plenty of museums for the historical throwback.

Georgetown is one of the best Colorado Springs day trips and an excellent place to put on a long weekend itinerary!

A vast population of conifers and old-growth trees is the reason why this town is called Evergreen. The town used to be a hunting ground for the Ute Natives. By 1860, settlers developed an economy based on lumber trade.

Today the town is famous for arts and cultures, dining, and sports. It is a really easy day trip from Denver yet feels still like a world away!

There are many places to explore, like Evergreen Lake, a public lake and park facility, with beautiful panoramic views, Alderfer/Three Sisters Park, a public park within the heart of the town, Flying J Ranch Park, and more.

The most amazing experience is naturally exploring the Rocky Mountains. There are various companies offering hiking, rock climbing, and survival schools.

Evergreen is a great place to visit if you have more than just a weekend in Denver – it is not too far away!

Fairplay is a historic gold mining settlement. A quiet town with minimal traffic, it is often known as the official Trout Fishing Capital of Colorado. Fifty miles of Gold Medal trout streams offer the highest quality trout habitat and the greatest potential for angling.

Fairplay is a mixture of modern retail businesses and historical heritage. You can visit an open-air museum, South Park City, the site of relocated historic structures, intended to recreate the early days of the Colorado Gold Rush.

The buildings brought here from the surrounding area include a trapper’s cabin, saloon, general store, blacksmith shop, and other businesses that thrived in the late 1800s.

Fairplay became the visual basis for the town of South Park in the television series South Park. Hidden below the historic Front Street, Fairplay Beach is located around a beautiful pond, offering opportunities for hiking, fishing, picnicking, and sightseeing.

In the northern part of the San Luis Valley, at the foot of the western slope of the Sangre de Cristo Range, is the small Colorado town Crestone, known as the new age religious capital of the world.

The town is known not only for its religious diversity but also for its architectural elegance.

Some of the most popular Crestone attractions, landmarks, and events are Crestone Music Festival, Crestone Historical Museum, the Baca Grande and Moffat, International Dark-Sky Community, a new destination for stargazers.

A former mining town was founded in 1890. It was the last silver boom town in Colorado in the 19th century.

Creede is located near the headwaters of the San Juan and the Rio Grande rivers and looks like a Wild West town, which it probably was.

The original town was situated at the base of Canyon, which later became the downtown of Creed. This small charming town is a harbor of outdoor activities, offering fishing, hiking, mountain biking, and rafting.

It provides entertainment for both: those who seek amazing adventures, like Western road trips, and those in search of educational attractions.

When you’re in the town, stop by Creede Historical Society Museum, the Underground Mining Museum, take a free underground tour at The Last Chance Mine, and explore one of the scenic byways like the Silver Thread Scenic and Historic Byway.

Marble is established in a valley of the upper Crystal River along the Elk Mountains. This little mountain town, with breathtaking views, was incorporated in 1899.

The town draws its name from a historic Yule Marble quarry. The marble of the quarry is considered to be of exceptional quality and has been used for the Tomb of the Unknowns, as well as for parts of the Lincoln Memorial.

In the 21st century, Marble has become a home for summer tourists. Every year the Marble Symposium welcomes stone carvers from all over the world, who come to turn white marble blocks into majestic sculptures.

This mountain town has many titles, like Colorado’s Last Great Ski Town or the Wildflower Capital of Colorado. It is located in the East River Valley which was once used as a summer residence by the Ute people.

Don’t forget to stop by a famous ghost town Gothic and Crested Butte Mountain Heritage Museum for the historic and cultural experience.

Breckenridge is situated at the base of the Tenmile Range. The former mining town boasts lux ski resorts, picturesque mountain scenery, as well as hundreds of restaurants, shops, and saloons.

Snowmobiling, cross-country skiing, and dog sledding are just some of the winter activities available here. The main destination for visitors is Breckenridge Ski Resort which provides world-class skiing and snowboarding.

In the summer, the resort turns into Breckenridge Fun Park with mountain biking, alpine slide, and hiking.

During fall and spring, there are also plenty of things to do in Breckenridge! But, Breckenridge in winter remains the most popular time to visit.

Stop at the Breckenridge Heritage Alliance for a historic throwback and visit the Cowboy Mine, an old mining site offering underground mine tours.

Ouray is located in the San Juan Mountains of southwestern Colorado. The natural alpine environment and scenery have crowned it Switzerland of America.

The town was established in the late 1870s by miners and prospectors. Ouray was named after Chief Ouray of the Ute tribe.

Ouray is known as one of the best ice-climbing places in the world. To enjoy various winter outdoor activities, visit the frozen falls of the Ouray Ice Park.

For newcomers, there are popular local guide services like Chicks Climbing and Skiing. Among other attractions of this charming town are the hot springs, including Ouray Hot Springs Pool, Box Canyon Lodge, Twin Peaks Lodge.

This town is hidden in the heart of the Rockies. It was named after John W. Gunnison, a United States Army officer who surveyed the transcontinental railroad in 1853.

With the mining boom, Gunnison began to increase and develop. This unique town provides round-year activities to keep you occupied, including hiking, mountain biking, hunting, fishing, and skiing.

A must-visit hotspot is Curecanti Recreation Area which features dramatic canyons and the largest lake in Colorado, Blue Mesa Reservoir.

Other attractions are Gunnison River Whitewater Park, Gunnison Pioneer Museum, and also nearby ghost towns, Ohio City and Pitkin. Don’t forget to walk along the downtown packed with shops and cafes.

The historical town of Durango is located in southern Colorado, full of interesting things to do both in town and out of doors. While a little larger (population-wise) than some places on this guide, we think it is one of the best places in the state!

A must-do activity while in Durango is to take a train ride on the Durango and Silverton Narrow Gauge Railroad. This authentic steam-engine train chugs through the mountains along the Animas River.

In the summer, the train has some open-air carriages, so you are sure to have amazing, unhindered views. Make sure to check out the free museum as well!

With the San Juan National Forest right in Durango’s backyard, there are a plethora of outdoor activities possible, such as hiking, biking, rappelling, climbing, ziplining, and white water rafting on the Animas River. In the winter, head up to Purgatory Ski Resort to hit the slopes!

Back in town, check out Historical Downtown Durango, listed on the National Register of Historic Districts.

There are shops, restaurants, art galleries, and museums to suit any taste, including the Durango Arts Center and the Powerhouse Science Center science museum.

For wine and beer lovers, make sure to visit the Four Leaves Winery and Steamworks Brewing Company.

There are many amazing Colorado small towns that didn’t make our list – let us know the best small towns in Colorado that should be here! Thanks! 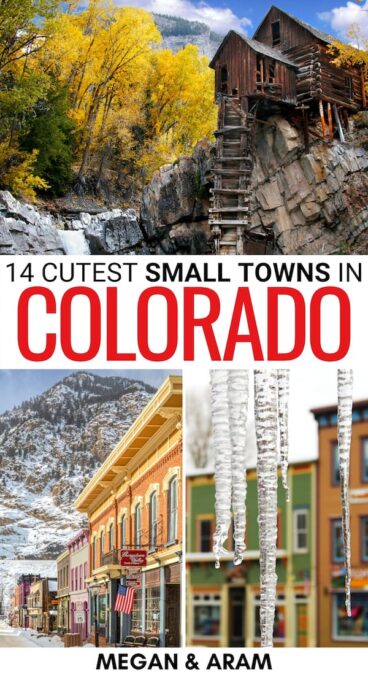