Are you keen to know more about the Rocky Mountains? These Rocky Mountains facts will detail everything you should know about one of North America’s most majestic landscapes.

Every year, the Rocky Mountains attract hundreds of thousands of skiers, mountain bikers, and outdoor enthusiasts.

The mountain range stretches for more than 3000 miles over 6 states and it even divides the North American continent with the aptly named Continental Divide.

Here are ten things you probably did not know about the Rocky Mountains. If you have any other Rocky Mountains facts that we left off this list, please drop them in the comments below!

1. The Rockies are Home to a Supervolcano

Did you know that a supervolcano lies hidden in the Rocky Mountains?

The volcano is located in the Yellowstone National Park and goes by the name Yellowstone Caldera. This is one of the reasons why you can see geysers in Yellowstone, and why there is an overpowering smell of phosphor in the air throughout the national park.

As the volcano’s eruptions occur millions of years apart, we will probably not see the Yellowstone volcano erupt in our lifetime, but never say never! Other signs of volcanic activity can be seen all over the Rocky Mountains, such as at the hot springs in Grand County.

Yellowstone National Park is one of the most visited US national parks and this supervolcano helps create the sights that we flock there to see! Click here if you’re actually planning a trip there and looking for some fantastic Yellowstone accommodation!

There are some 400 of these large sheep wandering through Rocky Mountain National Park and they are known to be very gentle and kind. You have the biggest chance of seeing them from May to June.

3. There are Still Many Indigenous People Living in the Rockies

The high peaks and plains of the Rocky Mountains are still home to numerous indigenous people. You will find reserves for the Bannock, Sioux, Blackfoot, Cow People, Apache, Kutenai, and many more.

In recent years, some national parks, including Rocky Mountain National Park, have tried to expand their representation of Native Americans in the park. They are partnering with the University of Colorado’s Indigenous-focused groups and representatives to do so.

Rocky Mountain National Park is on the unceded land of the Ute, Arapaho, Cheyenne, and Comanche peoples. We ask you to join us in acknowledging their communities, their elders both past and present, as well as future generations.

We also acknowledge that Rocky Mountain National Park was founded upon exclusions and erasures of many Indigenous peoples, including those on whose land these US National Parks are located.

⇒ Do your research before visiting National Parks and places in the US. Native Land and Whose Land are good starting points.

⇒ Donations matter. Part of the proceeds from this blog is donated monthly to the Native Women’s Wilderness.

4. Athabasca Glacier is the Most-Visited Glacier in North America

The Athabasca Glacier, part of the Canadian Rocky Mountains, is the most-visited glacier in North America. The glacier is some 4 miles long and the ice on the glacier runs between 100 and 1000 feet deep.

At the moment, the glacier retreats at a pace of 10 feet per year. It is not a good idea to walk the glacier without a guide because of the glacier cracks and it is extremely treacherous. There have been incidents in the past where tourists fall through the cracks, eventually leading to hypothermia and death.

5. Mount Elbert is the Highest Peak in the Rocky Mountains

The highest peak in the Rocky Mountains is Mount Elbert. Mount Elbert is located in the state of Colorado and is 4401 meters high, or 14,440-feet.

This is also why Mount Elbert is called a ‘fourteener’. Because the Colorado mountain is relatively easy to climb, it is a very popular mountain with climbers, hikers, and other adventurers.

Henry Stuckle was the first person to record climbing Mount Elbert in 1874. The mountain has the moniker ‘Gentle Giant’ as it is a class 1 to 2, meaning it is an ideal mountain for beginning mountaineers.

This is because the Rocky Mountains literally divide North America, earning them the name of the Continental Divide.

The continental divide of North America extends from the Bering Strait to the Strait of Maghallan.

7. The Rocky Mountains are 80 Million to 55 Million Years Old

During this time the Kula and the Farallon plates slid underneath the North American Plate. There was magma formation in the East which meant The Ricky Mountains could be formed. Other mountains that were formed in this time are the Laramie Mountains and the Black Mountains in Wyoming.

The Spanish explorer, Francisco Vásquez de Coronado, was the very first explorer to walk into the Rocky Mountains. His army and he marched into the mountain range from the south in 1540. He was looking for the Seven Cities of Gold.

These ‘cities of gold’ were supposed to be found in the Rockies of New Mexico. The cities of gold were: El Dorado, Paititi, City of Caesars, Lake Parime at Manoa, Antilia, Quivira, and Cibola.

The stories of these cities were probably based on the legends of the Portuguese about cities of gold on the island of Antillia in the 8th century, and the capture of Merida in Spain by the Moors.

The valley was filled with lakes that later receded. The lakes left sand that was then blown into sand dunes by the southwest winds in the valley over a period of tens of thousands of years.

Great Sand Dunes National Park is a bit remote, but if you can add an extra day onto a journey from Colorado to California, you should definitely make the detour!

10. There are 9 National Parks in the Rocky Mountains

This article was written by Lieze Neven. Lieze Neven is a travel blogger currently living in Nepal. Read more about the Rocky Mountains, skiing in the Rockies, and where to stay on your Rocky Mountain ski holiday in Winter Park on her blog.

Facts about the Rocky Mountains – Pin This Guide! 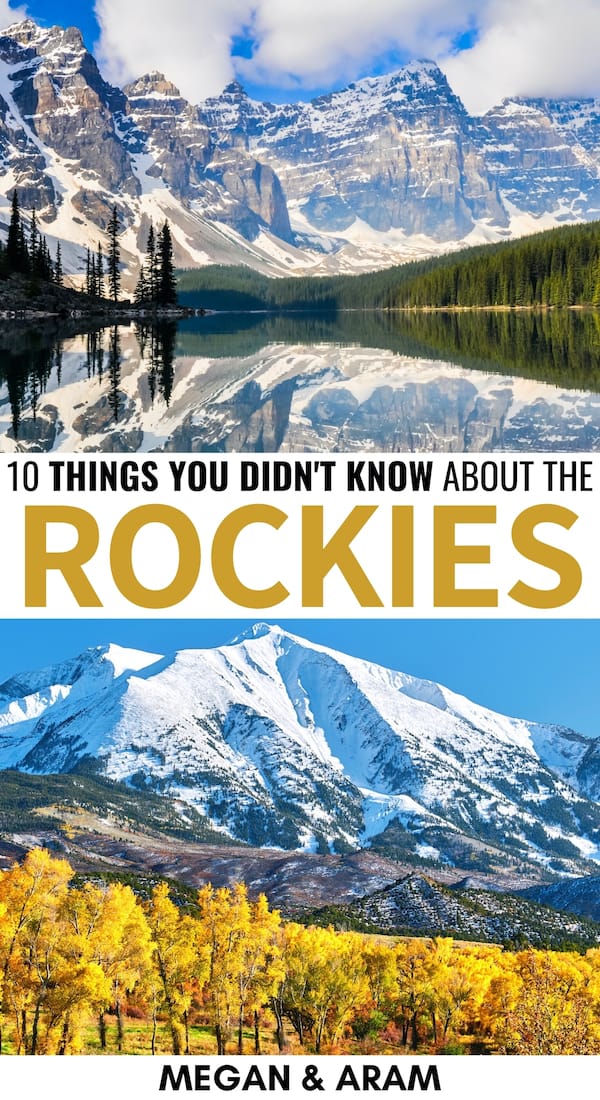 3 thoughts on “10 Rocky Mountains Facts That You Didn’t Know (But Should!)”