Are you keen to visit one of Norway’s most beautiful natural phenomena?  This guide to the glaciers in Norway will discuss some of the best Norway glaciers and how you can visit them so your mind can be blown in person!

Are you planning your trip to Norway last minute?

If youʻre booking your trip to Norway last minute, we have you covered. Below are some of the top tours, hotels, and more!

Top Experiences and Tours in Norway:

If you have any Norwegian glaciers that you think should be on this list, please leave them in the comments.

About the Glaciers in Norway

Norway has over 2,500 glaciers throughout the country and the most of any European country.

Norway’s 18 largest glaciers are actually situated on Svalbard, not mainland Norway. I even got to see a few when I visited Svalbard and it remains one of my fondest travel memories.  Svalbard has roughly 2,100 glaciers.

The word in Norwegian for glacier is ‘isbreen‘ and ‘isbreer‘ (plural), so if you are visiting a glacier in Norway and see it referred to as that, you will know in advance.

Glaciers are one of the best indicators of climate change due to their rapid melting and sensitivity. In Norway, they are also a huge source of energy as many hydropower plants are located in areas where glaciers are and use the runoff to produce energy for citizens.

Map of the Best Norway Glaciers

Around 60% of the glaciers in Norway are located in the South of Norway, below Trøndelag.  The largest Norwegian glacier on the mainland is Jostedalsbreen and it is also located in this area of Norway.

Jostedalsbreen also has several arms and branches and we include some of them here due to their popularity.

Norway’s biggest glacier (and Europe’s largest) in size is Jostedalsbreen located in Vestland county in the municipalities of Stryn, Jølster, Stryn, and Luster with a small part in Skjåk in Innlandet county. In 1991, a national park called Jostedalsbreen National Park was established and covers an area of 1310km².

Jostedalsbreen has 28 named glacier arms and some of them are just as famous as the main glacier itself. The highest point on the glacier is Høgste Breakulen and the highest mountain near it is Lodalskåpa.

Two of the main arms of Jostedalsbreen are Briksdalbreen and Nigardsbreen and they are both visited by tens of thousands of tourists annually.

There are also three museums and centers there: the Breheim Center in Luster, the Norwegian Bridge Museum in Fjærland, and the Jostedalsbreen National Park Center in Stryn.

There are so many activities you can do at this popular glacier in Norway but a favorite past-time is skiing there. In addition, you can go on a skiing trip around Leon and Olden and it will take approximately three days.

Or you can go glacier kayaking in spring and see the natural phenomenon from a different perspective!

Alternatively, you can do a little hiking there during the gorgeous Norwegian autumn or summer.

One of the more popular arms of the Jostedalsbreen Glacier, Briksdalsbreen, is visited annually by around 300,000 people and is located in Jostedalsbreen National Park in Norway.  The top is about 1900 meters above sea level.

Briksdalsbreen retreated about 800 meters between 1932 and 1951 and in front of it, a small body of water called Briksdalsbrevannet appeared. Interestingly, the water was later covered by glacier movement and then was uncovered yet again in 2008, according to the NVE.

Throughout its history, Briksdalsbreen has maintained its spot as a popular tourist destination in Norway and has been luring in visitors since the 19th-century, including me!

I got to check it out on a day trip from Bergen to Sandane.

At the bottom of the glacier, you will find Briksdal Mountain Lodge (or Briksdal Fjellstove), a place that has been serving food and offering accommodation since 1891.

This is one of the best mountains to climb and it just so happens to have a glacier on it!

In Luster, you will find Nigardsbreen, one of the more famous arms of Jostedalsbreen Glacier. The Norway glacier is popular for adventurers who, each summer, flock to Norway to do glacier walks on Nigardsbreen.

The name of the glacier comes from a local farm that was crushed by it in 1748 when the glacier advanced around 3 kilometers in just 48 years. It eventually stopped advancing 4.5 kilometers from where it stands today.

Another popular one of the glaciers in Norway is Bøyabreen, one of the glacier arms of Jostedalsbreen (this thing really is huge!). It is located in Fjærland in Sogndal municipality and is easy to see from the Rv5 when driving.

The reason this glacier made the list is that it is definitive proof of climate change and the glacier arm has retreated so much that is is hardly necessary to measure its length anymore.

Another popular arm of Jostedalsbreen is the well-known Austerdalsbreen located by Veitastrond in Luster municipality. It is a valley glacier with three large parts: Odinsbreen, Torsbreen, and Lokebreen.

The tail is known for its crawfish-like appearance and shape with light and dark areas able to be seen in the distance. It is also known for its tables that remain on a pillar of ice.

One of the most popular glacier hikes in Norway is here and it is a crossing that starts at Tungestølen and goes over Kvitesteinsvarden over the glacier down to Kattenakken and Briksdal.

This trip was first completed and documented by William Cecil Slingsby in 1894 and another pair, Kristian Bing and Daniel Sygnesand on the same day.

Folgefonna is a glacier located near Odda (and Trolltunga) in Norway. It is inside Folgefonna National Park and is my favorite glacier in Norway, simply for the fact that I could see it across the fjord from my flat when I lived outside of Bergen.

The Folgefonna Glacier is the name for three glaciers situated inside of the park- Nordre Folgefonna, Midtre Folgefonna, and Søndre Folgefonna. They are all located in the Hardanger region and are an easy, but a long day trip from Bergen. 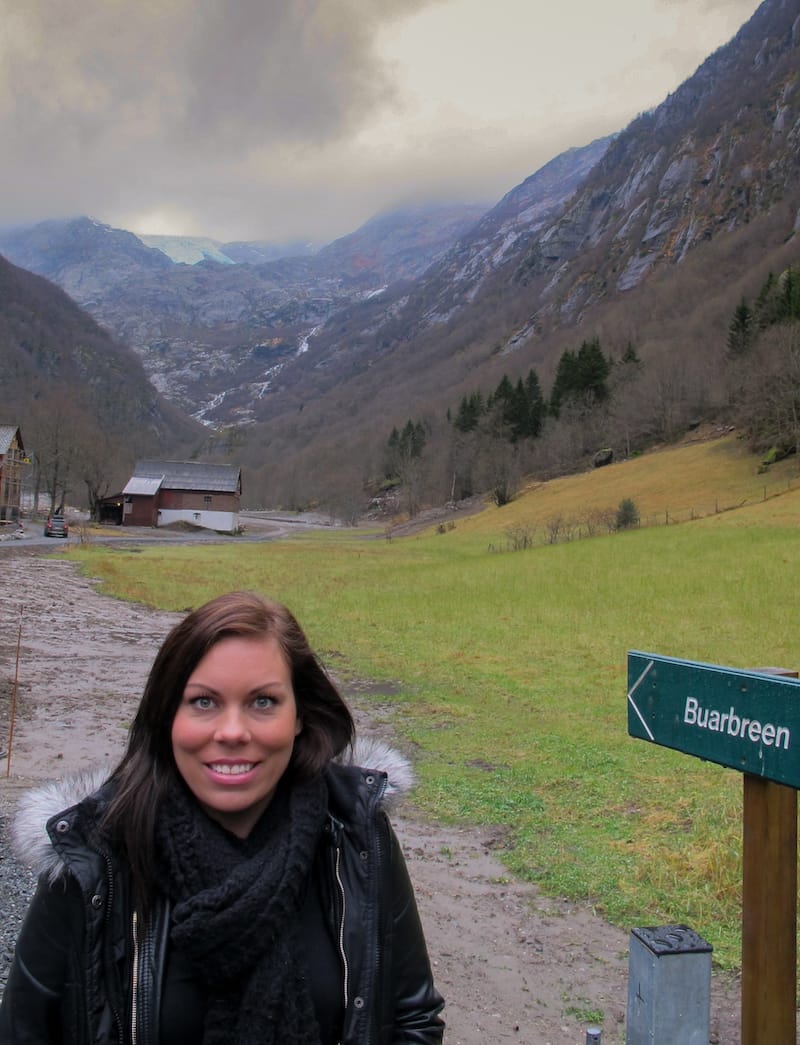 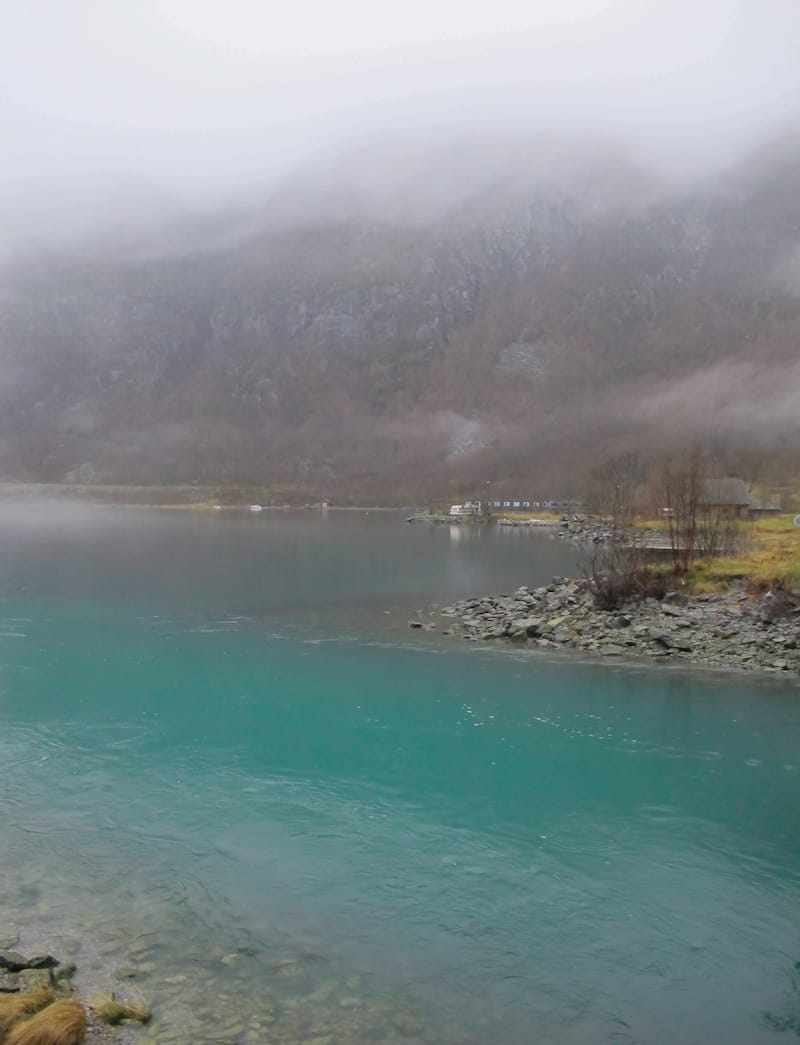 The Norwegian glacier is about 207km² and Folgefonna National Park was established in 2005 to protect the large glacier.

While I just played around in the park at Folgefonna, many travelers will venture there to visit the summer skiing resort located there in the northern region.

The three largest outflow glaciers from the main one are Blomstølskardbreen, Bondhusbreen, and Buarbreen. Buarbreen is easy to visit from Odda and it was the area I spent the most time in.

You can find the melt-water from the glacier in the famous Norwegian bottled water called ‘Isklar’. The melt-water trickles down Buarbreen into Sandvinvatnet below.

You can visit Folgefonna as a day trip from Bergen or you can stay overnight in Odda somewhere close by and spend more time there.

Another Norway glacier I love is Hardangerjøkulen, or Hardanger Glacier, which can easily be seen from Hardangervidda National Park.

It is the 6th largest glacier in mainland Norway and is located in Eidfjord and Ulvik municipalities. It is easily reached from Eidfjord village and very close to one of Norway’s most famous waterfalls, Vøringsfossen.

The highest point of the glacier is 1,863 meters and is it the highest point in Hordaland in western Norway. It can be done as a day trip from Bergen if you do it during times of the year when there is more daylight (ie: not during the Bergen winter!).

The glacier has been notably thinning out during the 20th century and the thickest measurement currently is 380 meters.

Hardangerjøkulen is known for being a great place to ski to from the village of Finse, which you can reach easily by the Bergen-Oslo train.  It is one of the best places to visit in Norway in winter or summer, depending on the type of activity you enjoy.

Fun fact: Star Wars: Episode V – The Empire Strikes Back used the glacier as a filming location for the ice planet ‘Hoth’.

Here are some of the most famous Northern Norway glaciers that you can visit.

Located in Nordland county, Svartisen is the collective term for two different glaciers: Vestisen and Østisen. It sits in the Saltfjell mountain range and is located in the municipalities of Beiarn, Meløy, Rana, and Rødøy.

Vestisen, or Vestre Svartisen, is the second-largest glacier on Norway’s mainland and it covers an area of 221 square kilometers. The only glacier larger in Norway is Jostedalsbreen.

Østisen, or Østre Svartisen, covers an area of 148 square kilometers and is Norway’s fourth-largest glacier by size.

In the vicinity of Svartisen, you will find some other small glaciers, such as Glombreen and Simlebreen. You will also see one of the most famous arms of Svartisen, Engabreen. It has the lowest point of any glacier on the European mainland and is easy to visit and see the ice up close.

The old ice on Svartisen is very dark compared to the new ice and freshly fallen snow, hence the name (which means black ice).

You can see Svartisen from the sea and it truly is one of the must-visit glaciers in Norway!

One of the most famous outlets on the Vestisen Svaritsen glacier is Engabreen. It is 36 km2 and has the lowest glacier terminus of all glaciers in Norway and goes nearly all the way down to Engabrevatnet.

Not only does this glacier stun visitors with its beauty, but it also surprises people as it is Northern Scandinavia’s biggest glacier and is one that is closest to the sea.

It is renowned for its baby-blue sheen and the gorgeous green meltwater of Holandsfjord. Engabreen is truly mind-blowing and a Norway glacier worth visiting.

Norway’s fifth largest glacier is called Blåmannsisen and it is located on the border of the municipalities of Fauske and Sørfold in Nordland. In addition, it is located merely 2 kilometers west of the Swedish border.

Because of the degree of crevassing at the glacier’s margins, it can be treacherous to trek across the glaciers, especially during the late spring or early summer when snow may be melting.

Currently, around 60% of Svalbard’s surface is covered by glaciers. The largest glaciers are situated on Edgeøya, Barentsøya, and Nordaustlandet as the temperature there is traditionally lower than that of Spitsbergen.

I first witnessed this spectacular glacier when I was on a boat trip to Pyramiden in Svalbard. En route, you will pass Nordenskiöldbreen, a glacier on Svalbard that was named after Finnish geologist Adolf Erik Nordenskiöld.

Nordenskiöldbreen is located between Dickson Land and Bunsow Land and it is around 25 kilometers long and 11 kilometers wide.

One thing I found very fascinating about the Svalbard glacier is that it is best witnessed from the sea. It allows you to see how vast it is but at a close distance- leaving you just mesmerized.

There are so many reasons to visit Svalbard and this glacier is one of them!

Bråsvellbreen is a glacier in Nordaustlandet in Svalbard. It is part of the Austefonna ice cap and is a 45-kilometer long stream south of the Sørdomen ice dome.

The glacier received its name after a rapid advance back in the 1930s when the front of it advanced out 20 kilometers into the sea over a two-year period.

This was the longest surge ever observed on Svalbard and travelers still flock to see this popular Norwegian glacier today.

These glaciers in Norway are sure to blow your mind and make you book a trip instantly to the Scandinavian country.  If you have any favorite Norway glaciers, please leave them in the comments section. 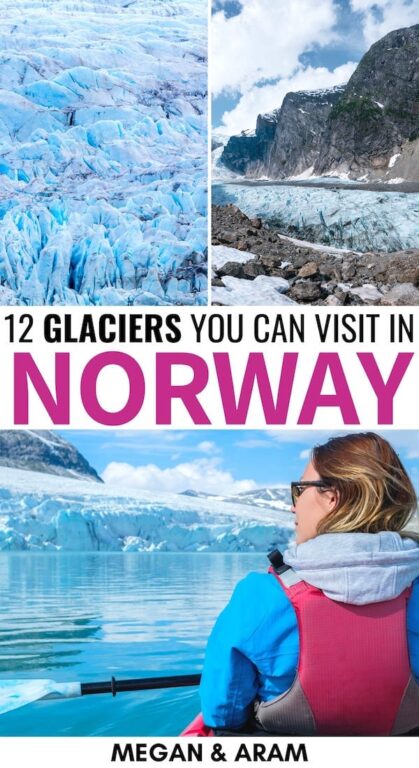