Disclaimer: This post actually references the 10th microdistrict as that is where my adventures always start when I head out to the area in Bishkek.  Photos are from there, parks around it, the 11th, 12th, and 5th microdistricts, as well.  All are within walking distance and are unique in their own rights.

I’ll never forget those months in 2013 when I started planning my first trip to Central Asia.  I sat inside of the cafe in Oslo that I was working at trying to sort out my visa to Kazakhstan and praising Kyrgyzstan for being visa-free while cursing Kazakhstan for being an expensive pain in the ass.  Central Asia was truly foreign territory at this time. 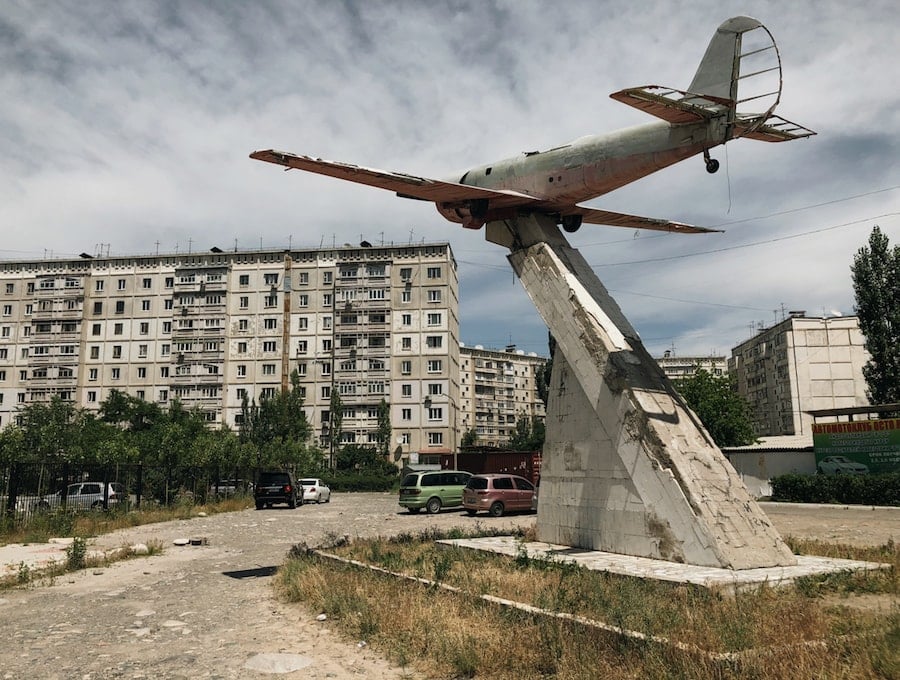 I flew to Bishkek on Christmas Eve (December 24 Christmas, not Orthodox Christmas).  My flight from Oslo left on the night of December 24th and I arrived for a 24-hour layover in Moscow on December 25.

Being unable to contain my excitement for being in Russia’s capital, I paid $200 for a transit visa so I could leave the airport and see Red Square (and then drink beer and eat a lot of food with mayonnaise and dill before crashing at the airport hours later wasting that entire transit visa).

I arrived in Bishkek completely wiped out and ready to sleep.  I took a taxi from the airport to my hostel which was located outside the city a bit.  But I didn’t know that. I thought my hostel was in the city center because I did poor research.

I had a large dorm room to myself, one of the few advantages (for travelers) resulting from lack of tourism in Central Asia and the Caucasus back in the day, and I passed out.  When I woke up six or seven hours later, I went exploring.

I headed to the main road from where I was staying and took a left.  Since I was in what I thought was the ‘city center’, I figured this would take me to the main and to many of the best things to do in Bishkek.

Not knowing what the main sights actually were, I ended up somewhere, in the 10th Microdistrict, wandering around and thinking that maybe this was Bishkek’s city center. 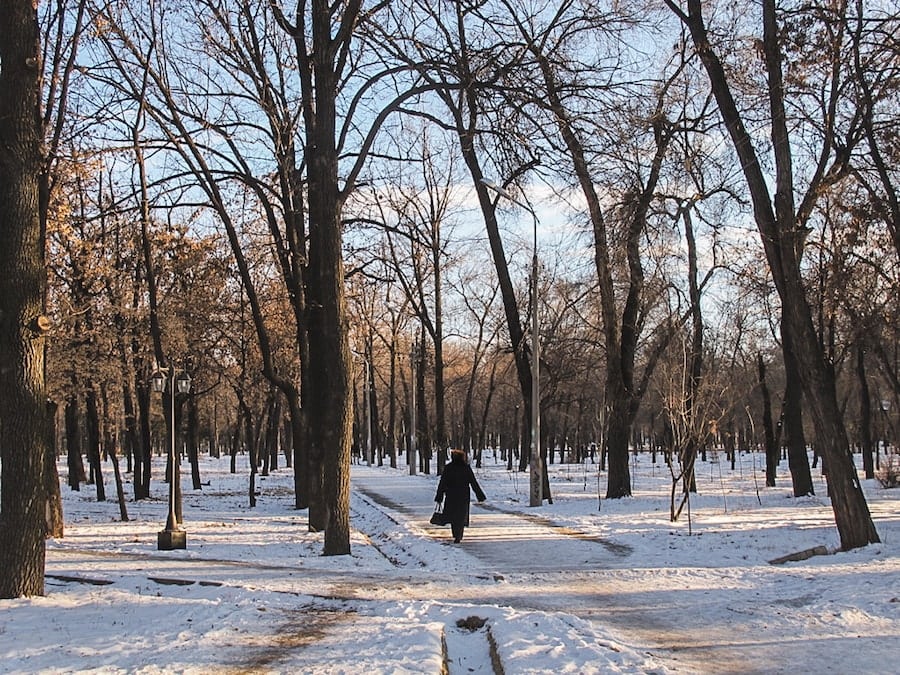 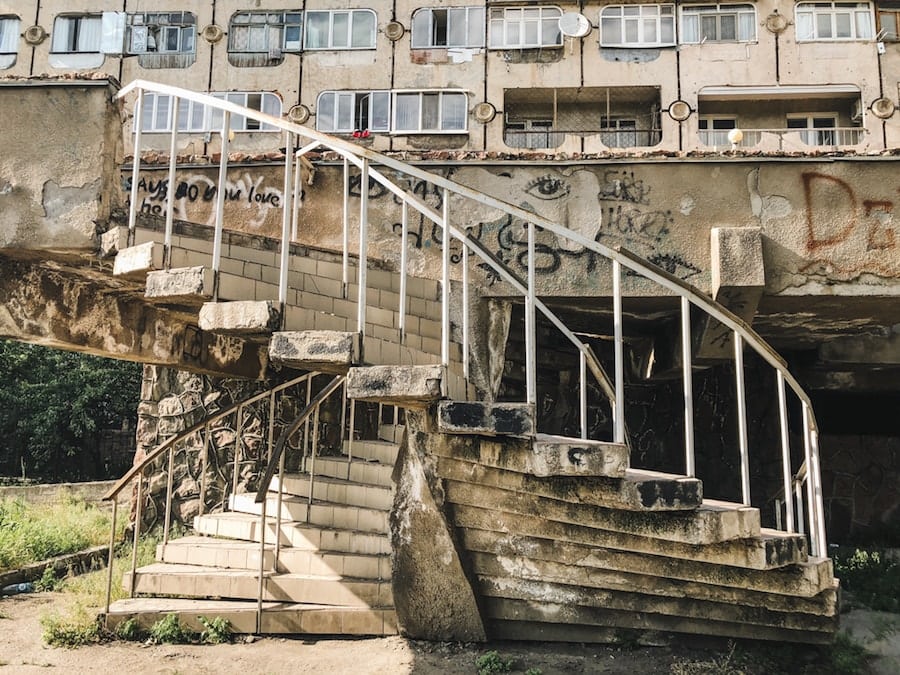 It was pretty.  The mountains in the background as I walked up the street is an image that will remain in my mind forever.  It was cold but everything was so new to me that I didn’t care.

I watched parents play with their children in parks and locals eat corn on the cob sold from street vendors donned head to toe in fur.

I wandered in and out of grocery stores along the way as visiting markets and grocery stores is almost always the first thing I do when arriving at a new destination. I remember that day so, so well. 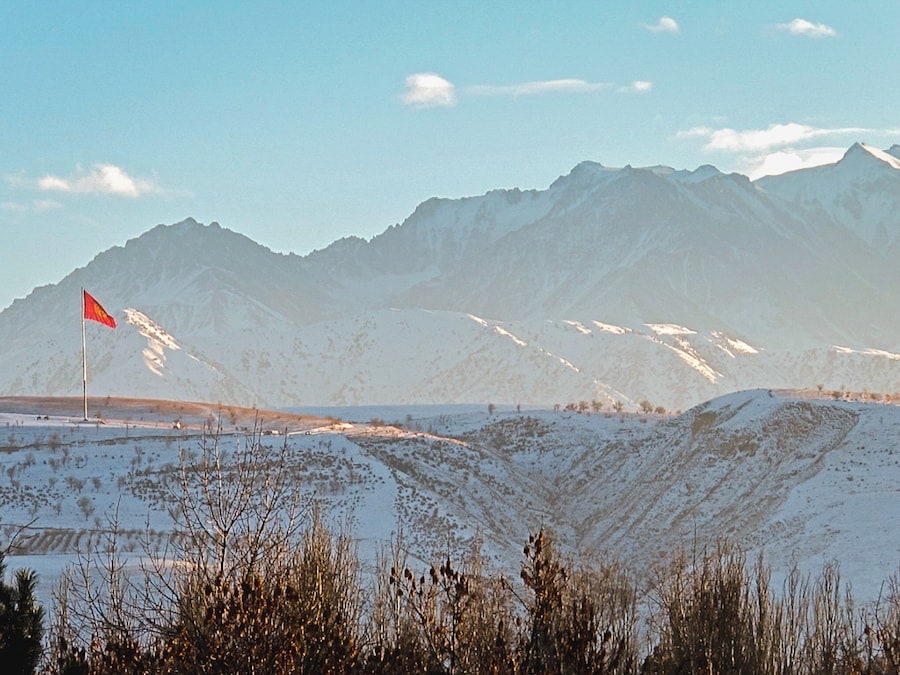 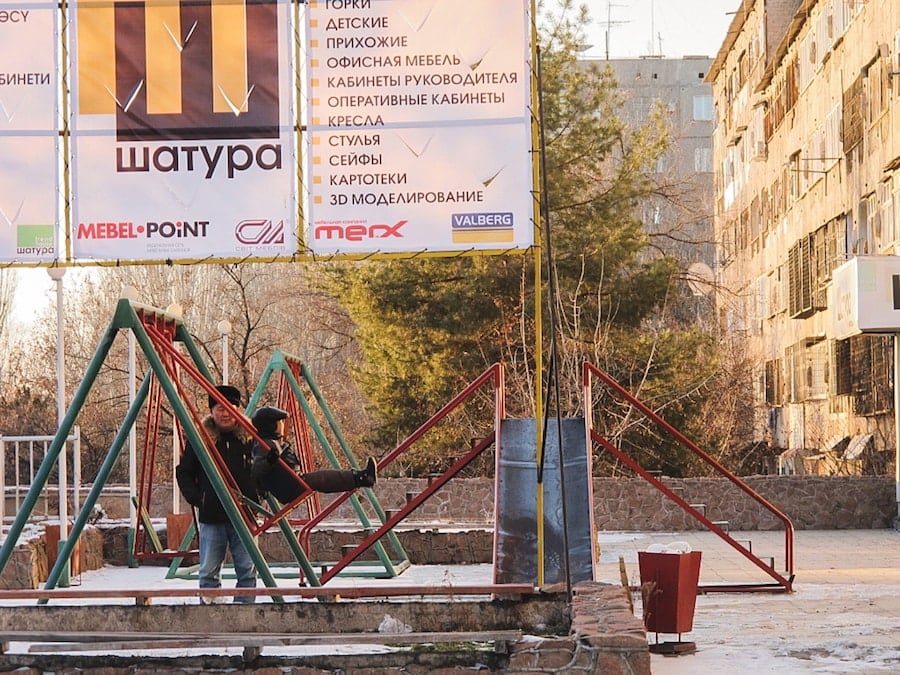 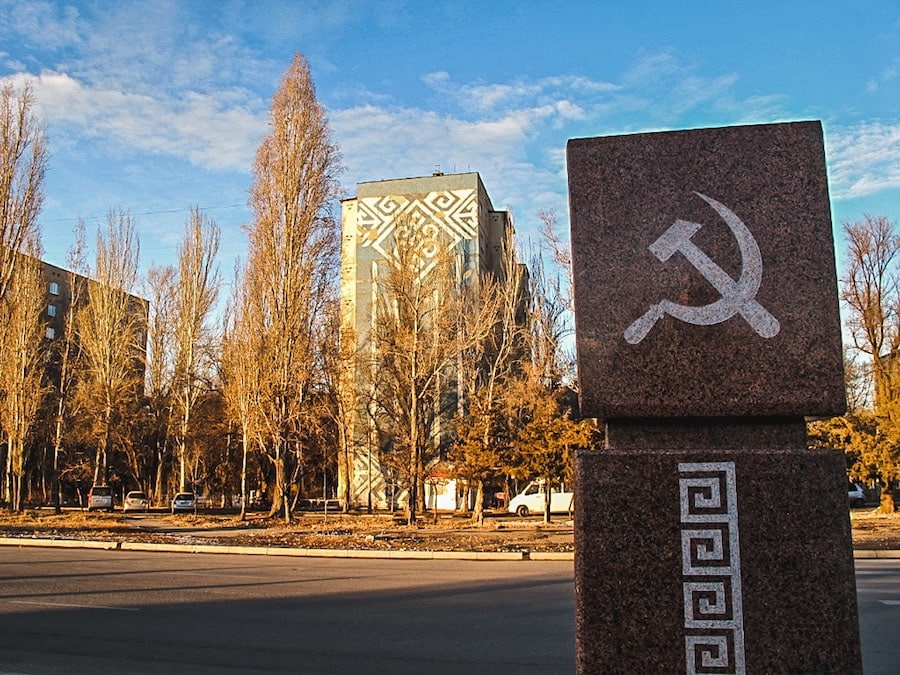 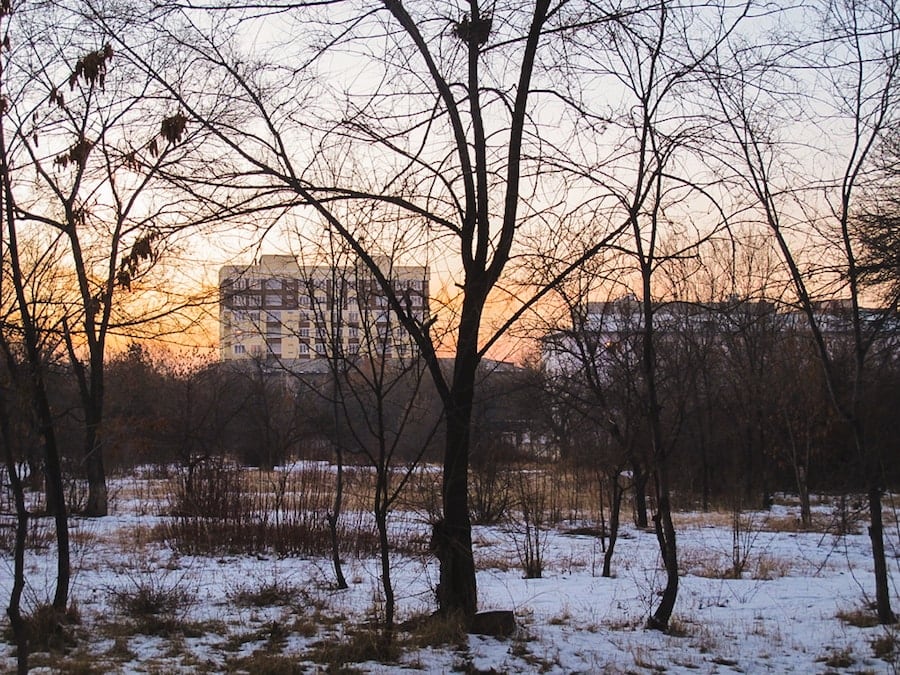 I later learned that I had been hanging in and around the 10th Microdistrict in Bishkek, not the city center.  I eventually made my way to the city center multiple times, but I always found myself heading back out to that microrayon to eat and hang out.  It became my comfort zone, in a way.

When I moved to Kazakhstan for the second half of 2016, I had to make visa runs to Bishkek every fifteen days.  Only twice did I ever leave Bishkek during these many, many stints.

The rest of my time was spent playing around in the city, exploring local parks and sanatoriums, and heading out to this microdistrict to get away from the hustle and bustle of city life.

Kyrgyzstan tourism was picking up and the country didn’t quite garner the odd stares it used to when I told people I was heading there. 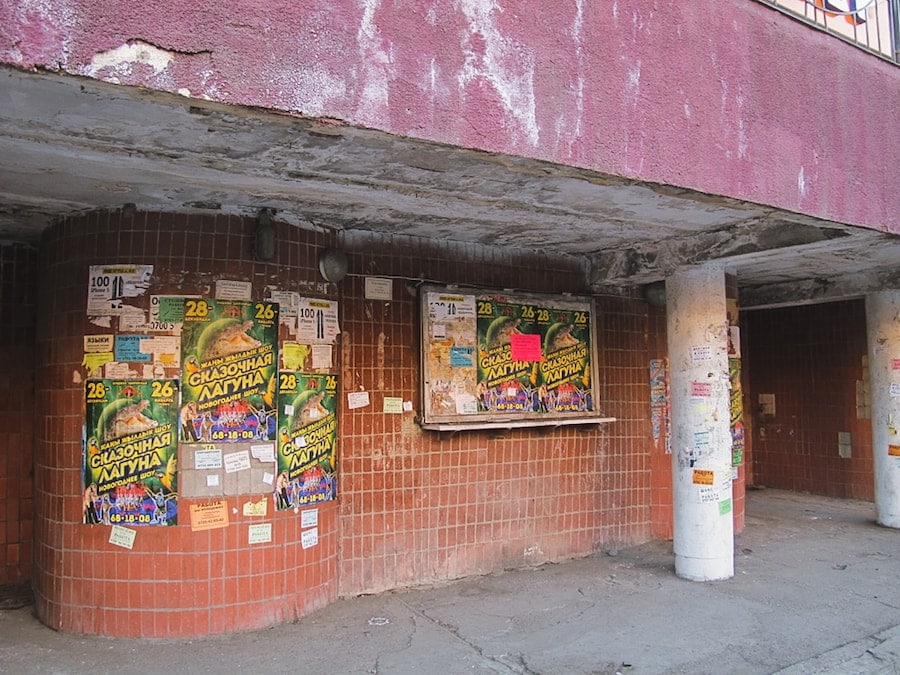 My travels went awry due to taxi woes and what not in Kazakhstan late in 2016 and I longed for something familiar with less low-level corruption.  I broke down in tears and had no idea what to do. While my time in Kazakhstan had come to an abrupt end at that time, I couldn’t leave the region for another week.  I unapologetically packed up all of my belongings and flew to Bishkek after refusing to take a marshrutka from a near accident in one the week before in between Kazakhstan and Kyrgyzstan.  I mentally stuck a middle finger up at Kazakhstan and knew in my heart that it would be a while before I returned. 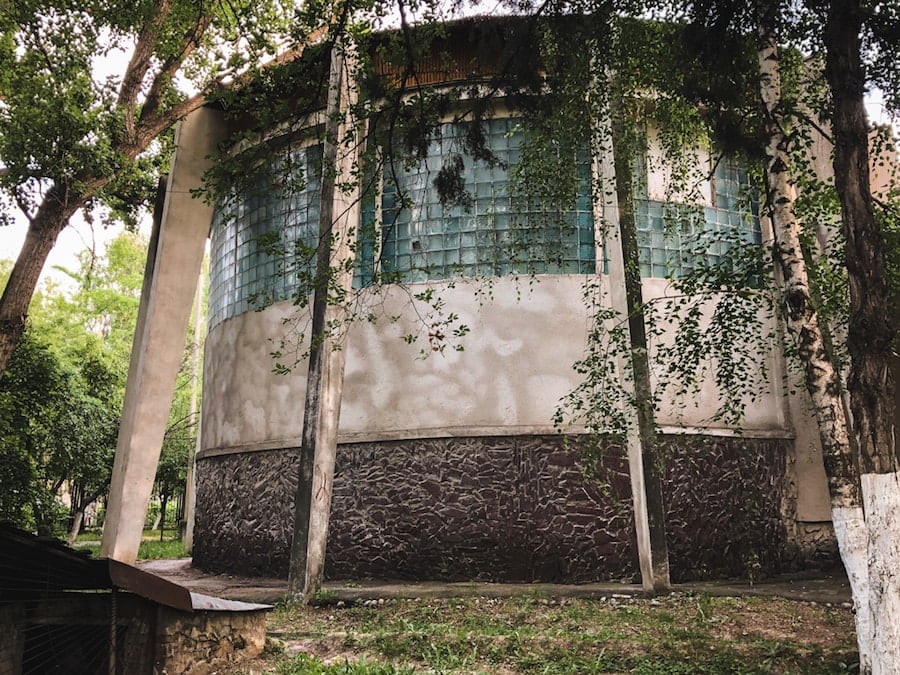 Once I arrived in Bishkek, I awaited another flight to Osh which ended up being another dramatic event (you can read more about it here).  After the ‘worst case scenario’ became my actual scenario, I found myself back in Bishkek for a short amount of time before my flight to Istanbul.

I put my headphones on and headed out to the 10th microdistrict via taxi in an attempt to say goodbye to a region that I needed to break up with.  December is no treat in Kyrgyzstan. I wasn’t going to miss the country or the region. 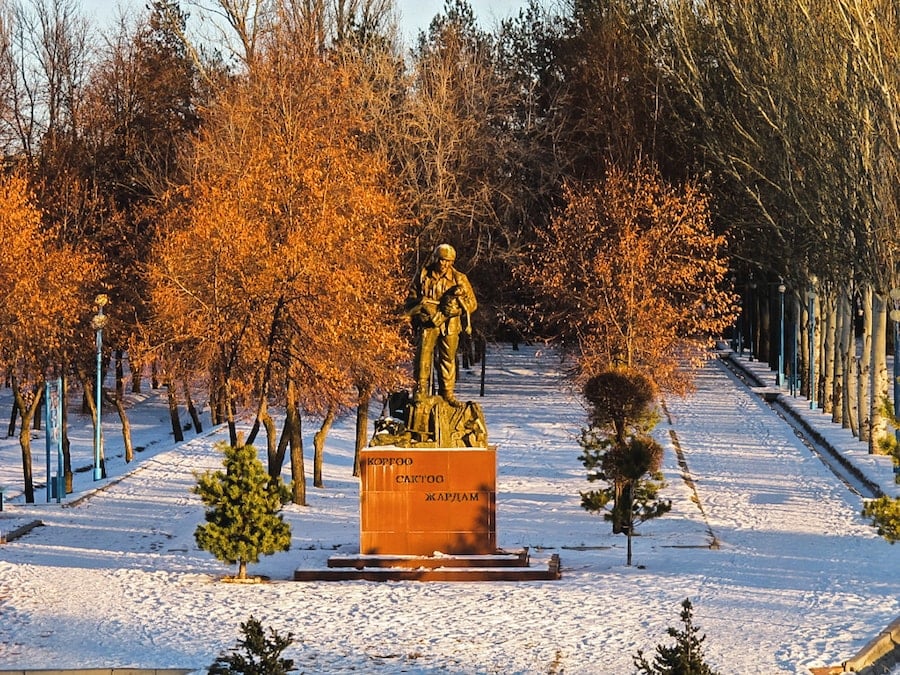 I arrived back home and spent the next six months taking Schengen exiles in the Balkans, a region that I like… but don’t love.

I spent time in Romania where I got bit to pieces by an early outbreak of mosquitoes, a traumatizing event that has left my arms looking like I am recovering from an opioid addiction.

I spent time in Belgrade where wifi problems caused me to have regular panic attacks and begrudgingly relocating myself back to Romania. 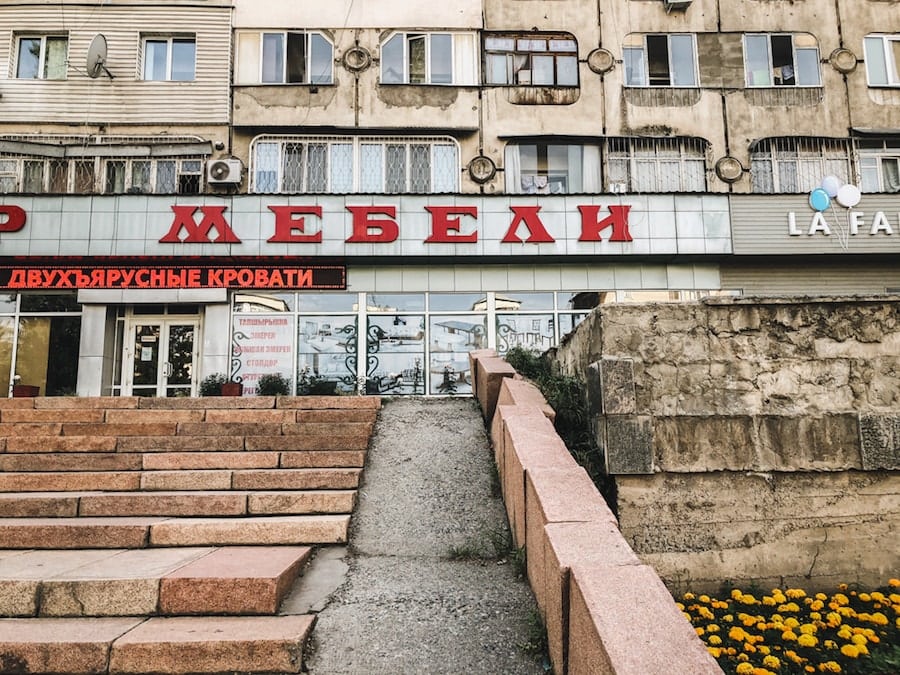 The year of 2017 was a blur for me.  I moved in and out of random countries trying to find normalcy in an otherwise chaotic existence.  I disconnected more and more with the world and people that year than any other year to date.

At the end of 2017, I vowed to make a change for the following year.  I would either work on that elusive German visa… or I would go to places that felt like home to me. Still, without a German visa, it is pretty evident that I chose the latter.

Each year has a different meaning to me.  2014 was the year of travel and the Balkans.  I also moved to Germany that year. I discovered so many cool bands and there are several songs on my playlist that reignite those memories vividly.

Four years later, I can confidently say that 2018 was the year of Central Asia. After spending April in Armenia and witnessing the country’s revolution, I packed my bags and headed out to Almaty, a city I wasn’t actually sure I was ready to head back to.  But, I had to. 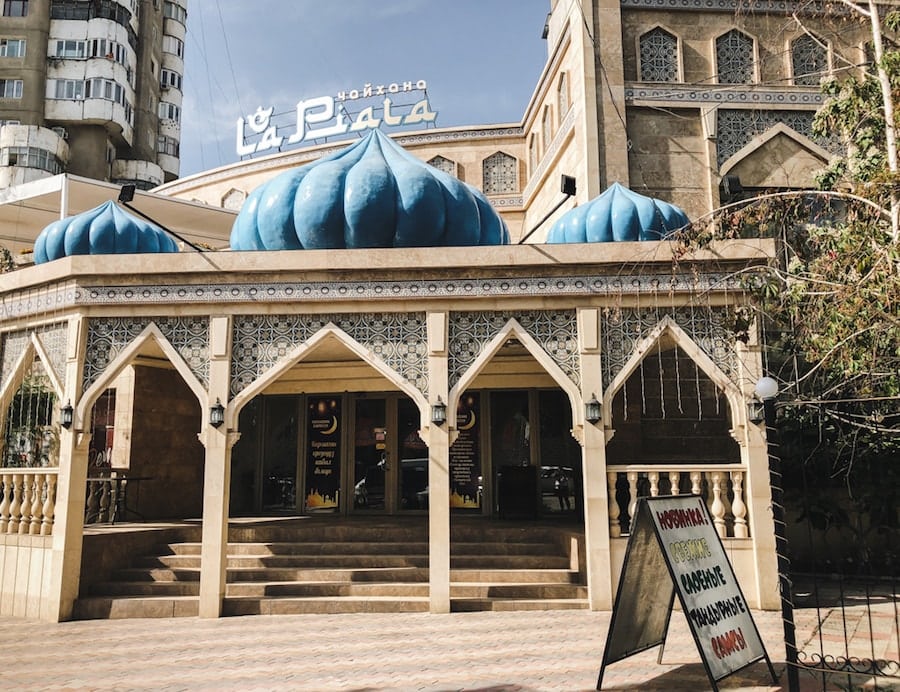 Almaty was familiar but things had changed.  English was spoken a bit less than before and some of my favorite businesses had closed their doors.

However, everything was a breath of fresh air (not literally as the pollution still sucks in Almaty). I met new people easier than I had ever done before.

I didn’t have to make visa runs to Kyrgyzstan every two weeks and I had built myself a small family in Almaty. I went to the mountains and on trips at least twice a week and explored the region like never before.

The scenery blew my mind and made me fall in love with the country all over again. 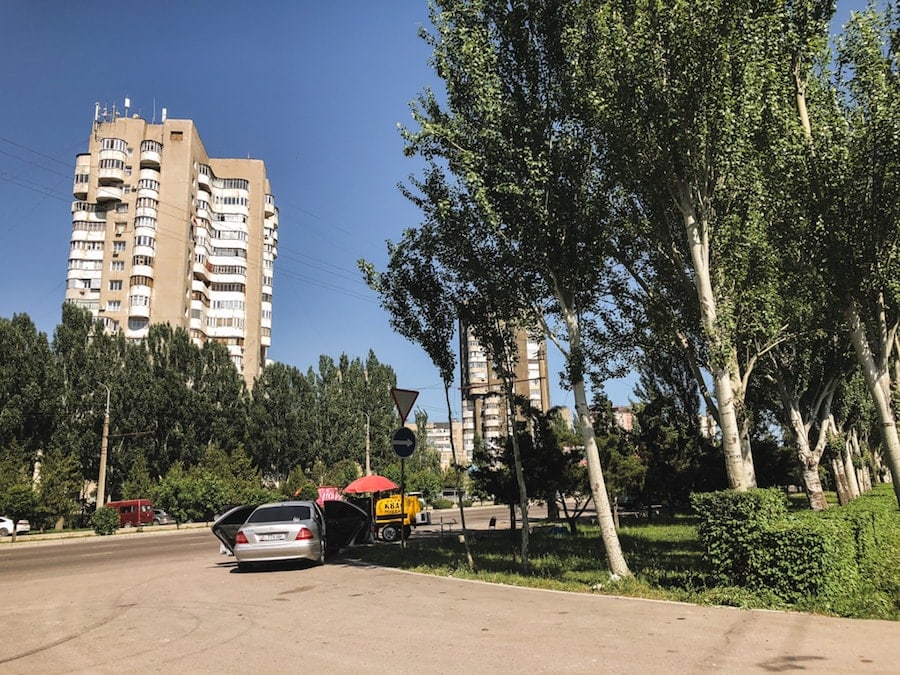 But, the wifi didn’t work.  I won’t go further into detail but let’s just say that corruption is ever-present in Central Asia and it can trickle down to media and society faster than my dog careens toward a piece of dropped food on the floor.

I struggled to work for weeks and finally decided to pack up my things and head to Bishkek.

I arrived in Bishkek and almost immediately took for my beloved 10th microdistrict.  It evokes such powerful memories and a sense of freedom that seemed to be stripped from me in many ways in Almaty, whether it be from the wifi situation to the inability to travel with ease around the country.

Mostly, it just feels like home and brings back a sense of nostalgia that I long for in the places I visited when I was a bit younger and certainly more naive. 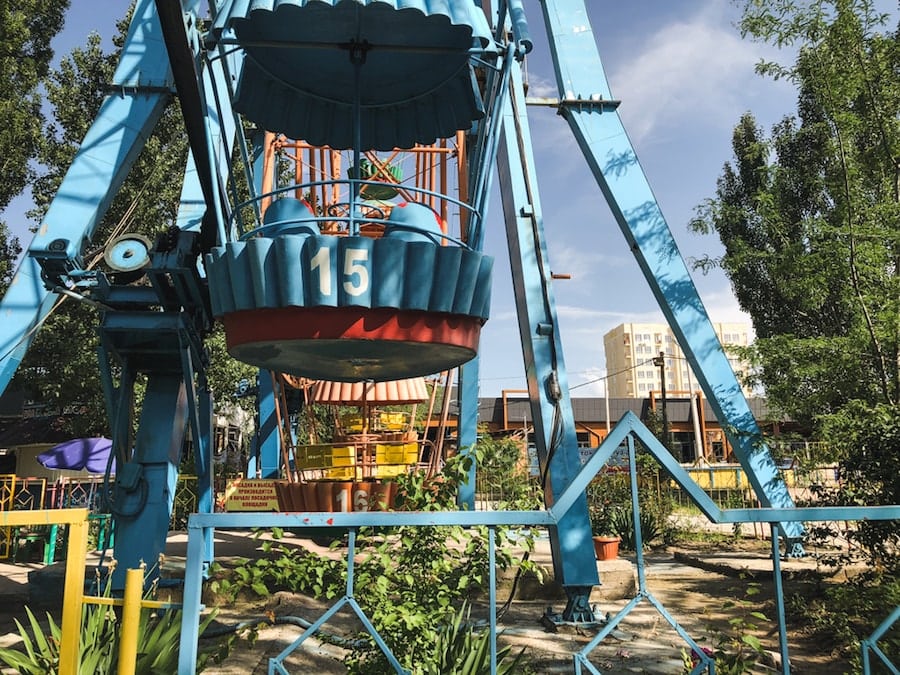 I spent quite a few weeks in Bishkek and had one of the most productive stints of my life with some of the best people in the world to be surrounded by.

Aside from my Song Kul and Kilemche disaster, I pretty much stayed in Bishkek and worked or chilled out like someone who lived there. And, every week, I headed out to the 10th microdistrict to walk through courtyards, the sleepy theme park, or just to check out the striking panorama. 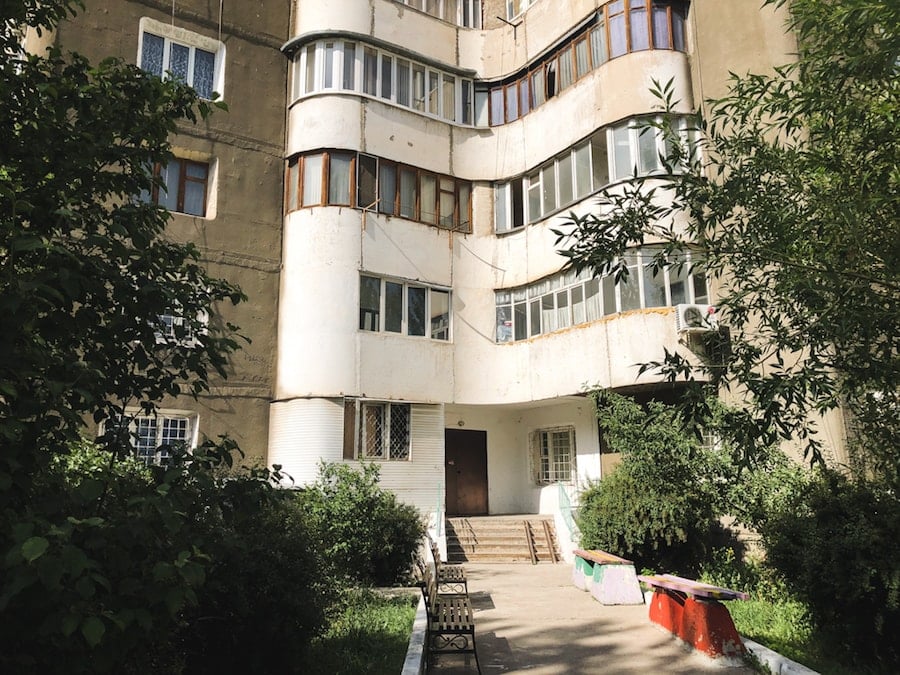 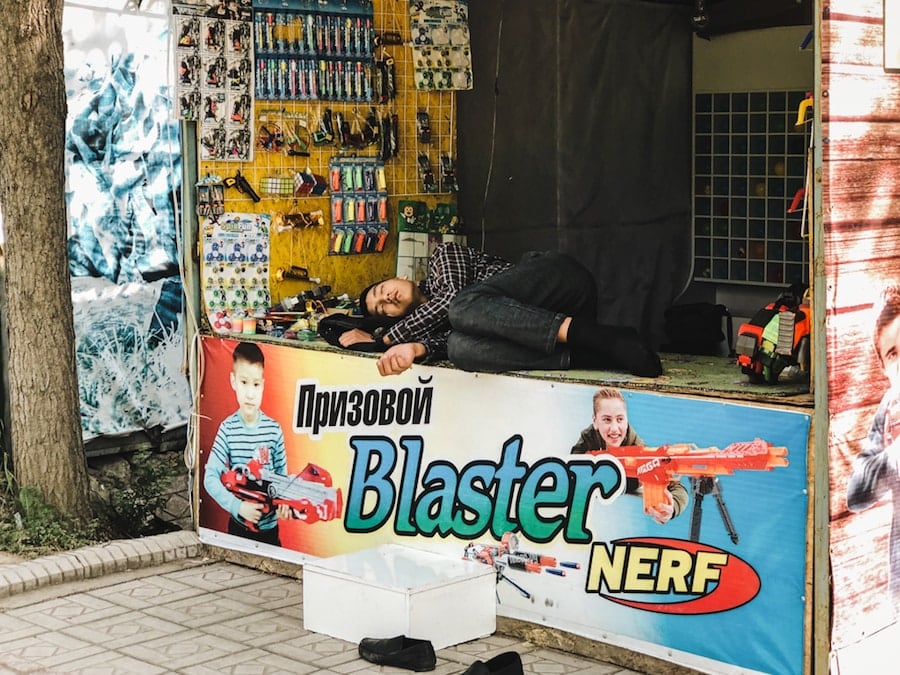 One time, I even got word about a specialty coffee shop out there (Flask) and I walked for hours trying to find it since my Google maps wouldn’t cooperate.

I never found Flask but I didn’t mind. It was 35C that day and I opted to walk back from the 10th microdistrict to the city center and it didn’t bother me a bit as I perused through the courtyards and back streets until I found my way back to the center.

I am often asked which city I prefer: Almaty or Bishkek.  And to be honest, I don’t have a preference. It’s like asking my parents which child they prefer.

They will usually (and jokingly, I hope) say my youngest sister because she is smart (a doctor, in fact), never got into trouble, and was awesome at everything she did.

But I know they love me just as much because it is kind of obligatory as a parent.  Moms and dads don’t reply to that.  That is how I feel about Almaty and Bishkek. I can’t tell you to visit one over the other; they are both fantastic cities for extremely different reasons. 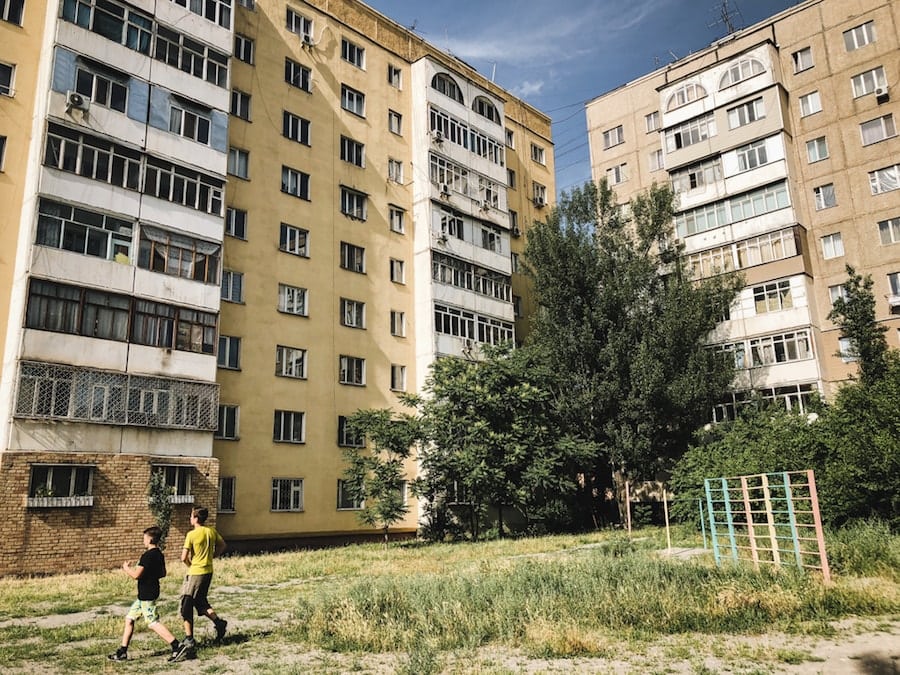 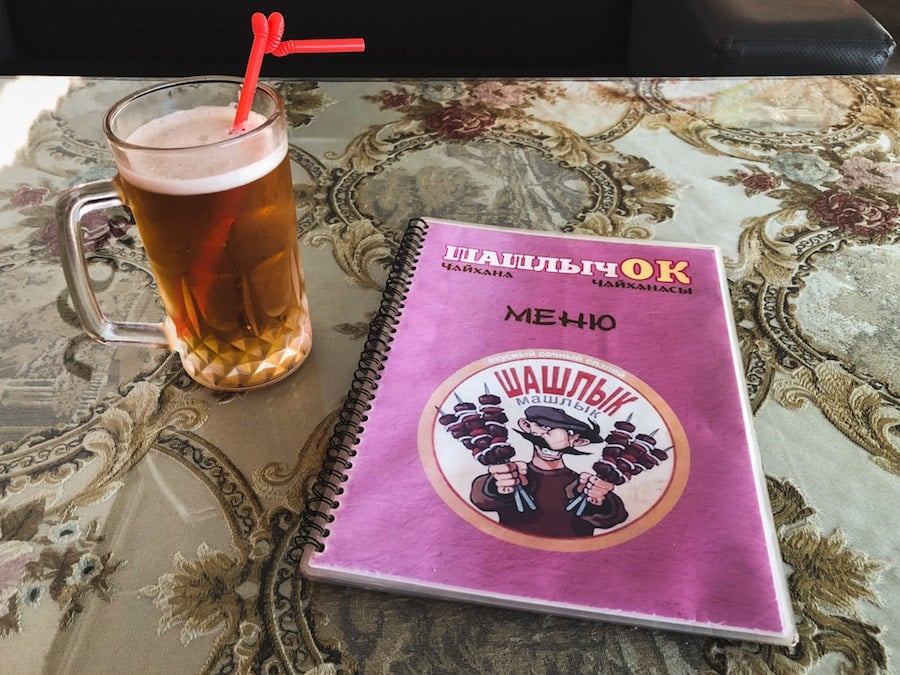 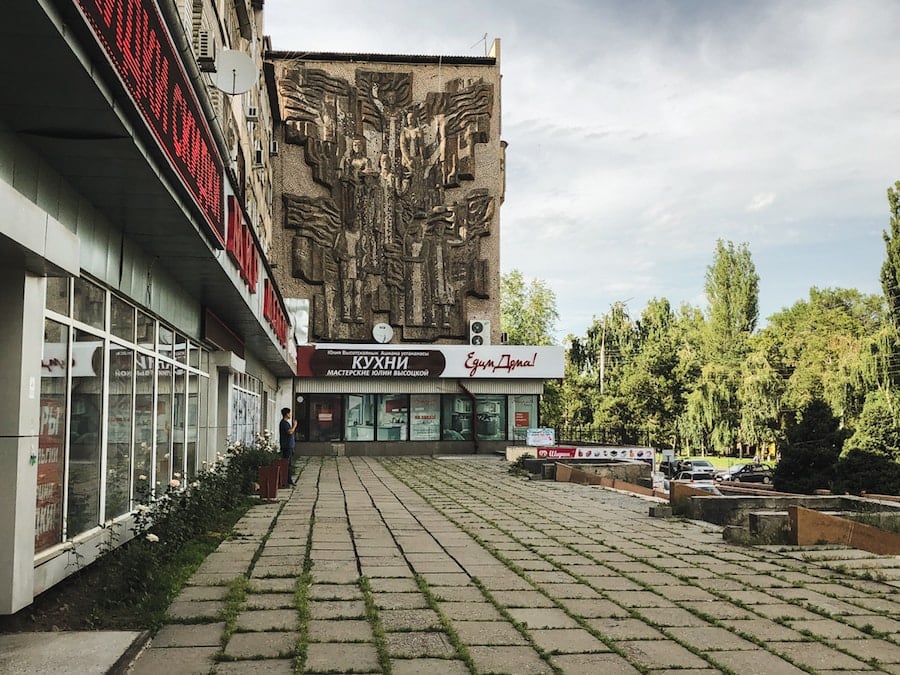 After all these years, I realized that my travel and personality style needs both cities in order to be in my happiest state in Central Asia.  When I spend more time in one than the other, I pine for the other city.

When I get annoyed at things in Almaty, it calms me knowing that Bishkek is right down the road and I can plot my escape, if even for a weekend.

Almaty, the Kazakh steppe, and the vastness of the country allow me to dream.  Bishkek and the dramatic Kyrgyz scenery keep me humbled and grounded. I have a crazy and hectic life and Almaty is my escape and Bishkek tends to be my reality check.  And, without a doubt, I need both cities in order to function at my finest.

And it all started with fortuitously getting a little bit lost in Bishkek’s 10th microdistrict.

4 thoughts on “Bishkek’s 10th Microdistrict: Nostalgia From the First Place I Visited in Central Asia”