One thing that never got old when I was traveling around Southeast Asia was the signage.  Whether the sign was handwritten, drawn, or government issued…it never failed to entertain me and my immature sense of humor.

Here are some of my favorites from my time spent in that part of the world and part of the reason I think you should take a Vietnam Laos Cambodia tour or at least visit independently: 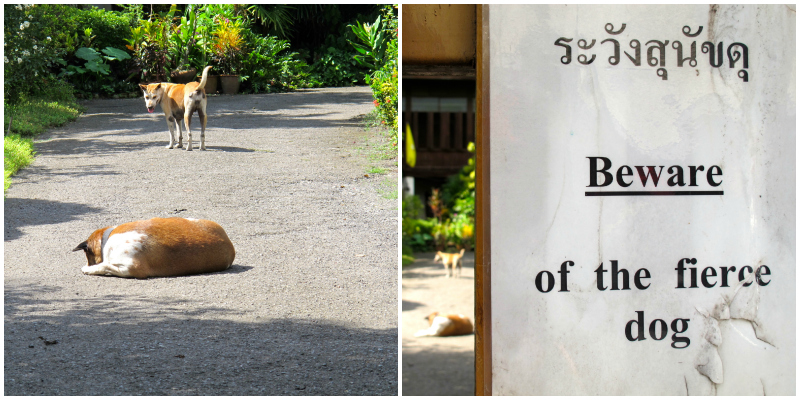 Many dogs in Chiang Mai, Thailand looked fierce but I can honestly say these two lazy pups did not scare me. 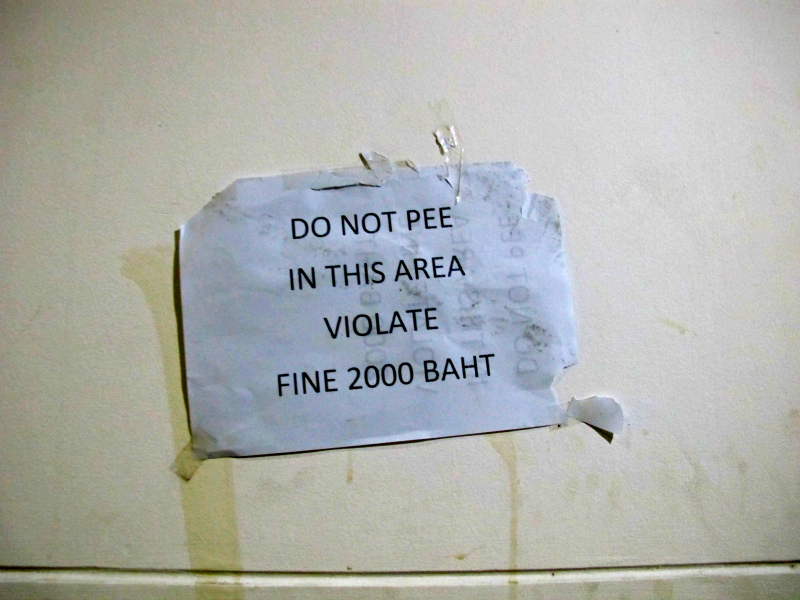 I was actually about to squat and pee in Bangkok when I encountered this sign.  I decided against it at that point (2000 baht is around $60…$60 better spent on beer or something). 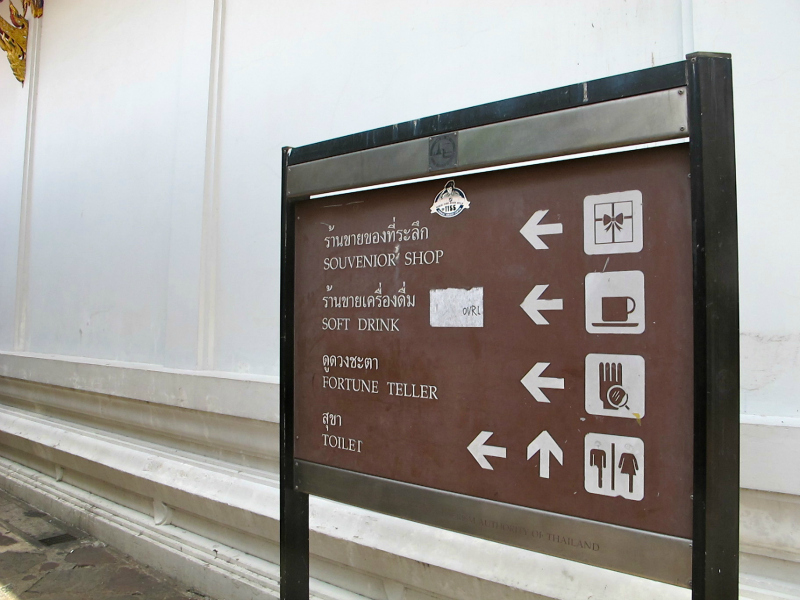 At Wat Pho in Bangkok…I spent hours being concerned about where the fortune teller was.  I’m really glad this sign comforted me in knowing there was one on the premises. 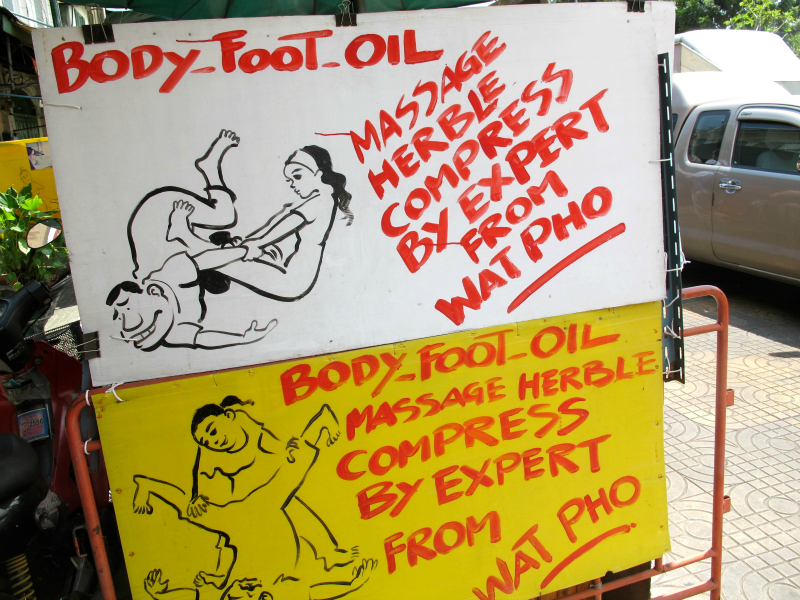 Signs for Thai massages were always able to pull some immature comment out of me. 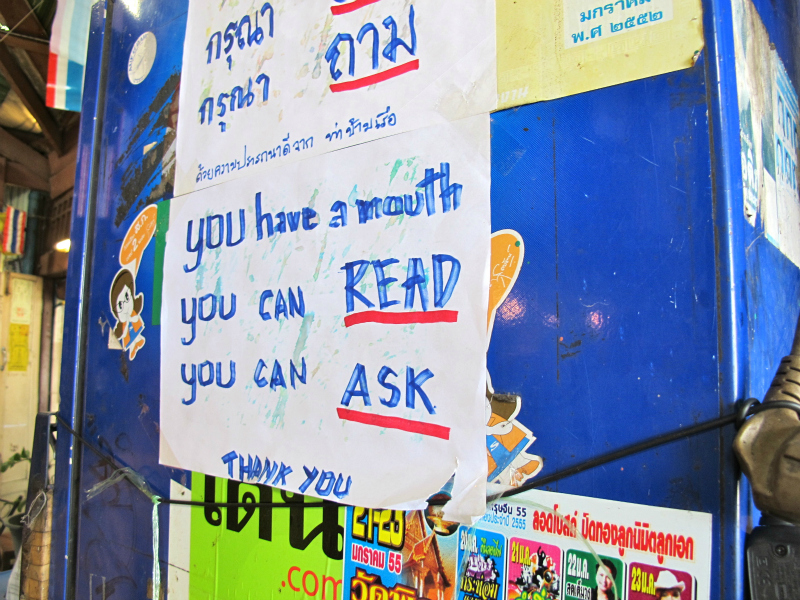 I thought this was rather rude to be honest.  For a person trying to sell goods…they could at least be able to answer customer questions (like “Why does this real Louis Vuitton only costs $6??”) 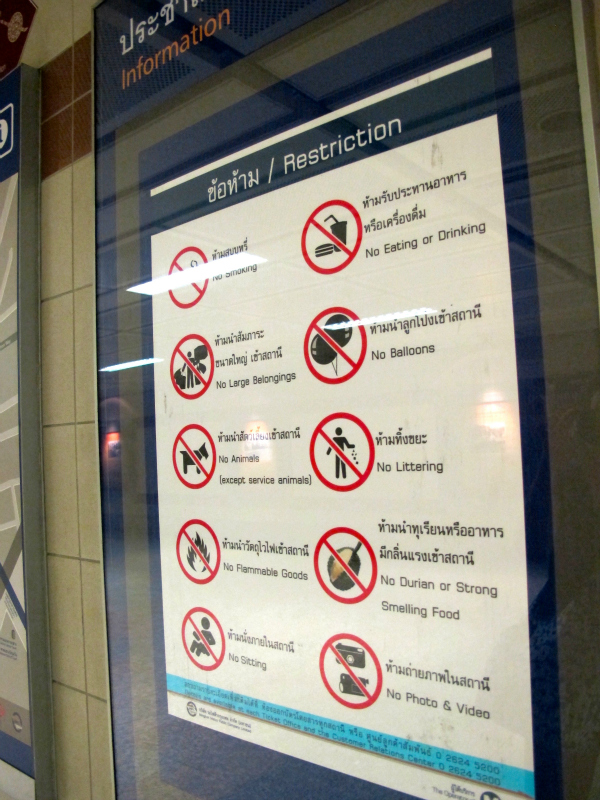 No balloons?  Really?  Apparently Bangkok has had problems with that at some point. 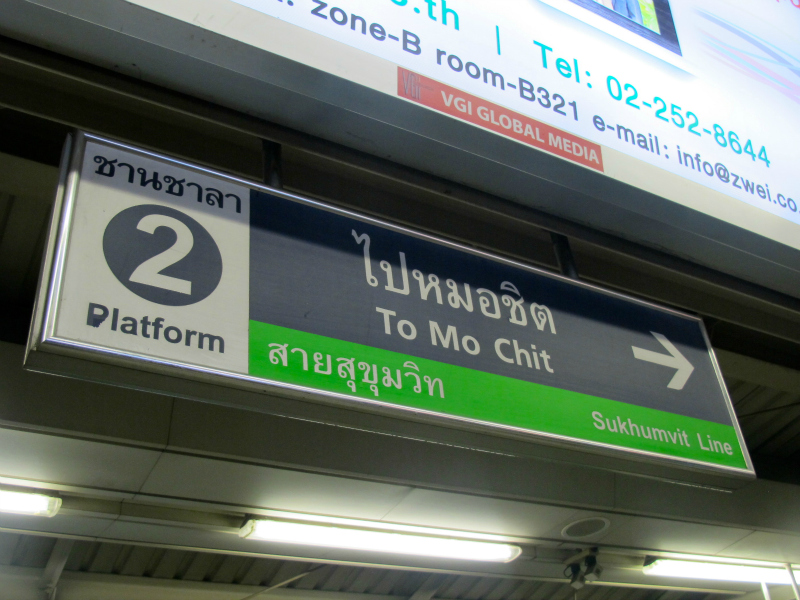 Another way to stir up my immaturity?  Name one of the public transportation stops and areas ‘Mo Chit’.  I will make up sentences with it for the rest of the night…just ask Lindsay.

Screw the haircut…where can I find that handsome fella posing in the middle of the sign? 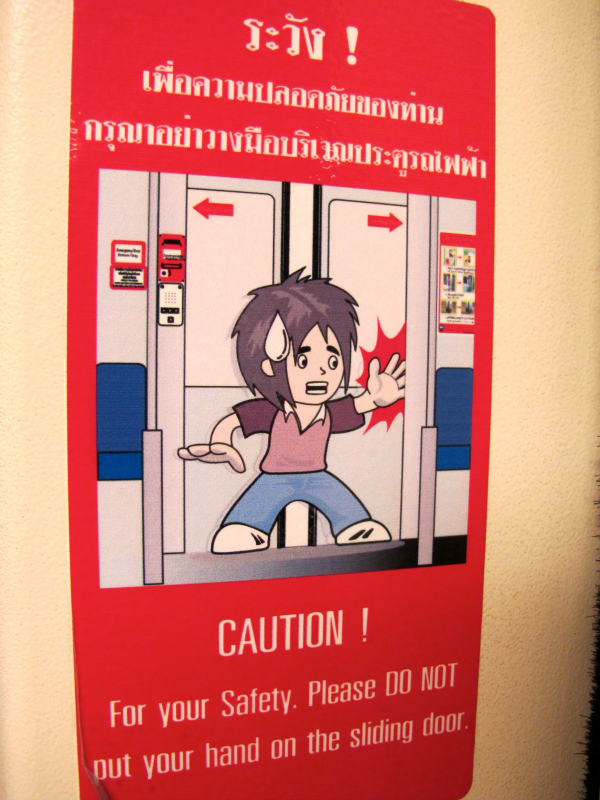 This is on Bangkok’s MRT.  While the sign is not really entertaining…it took me days (ok…WEEKS) to try to figure out why he has a water drop on the side of his head?  It still remains a mystery.  $20 to the first person who can give me the correct answer. 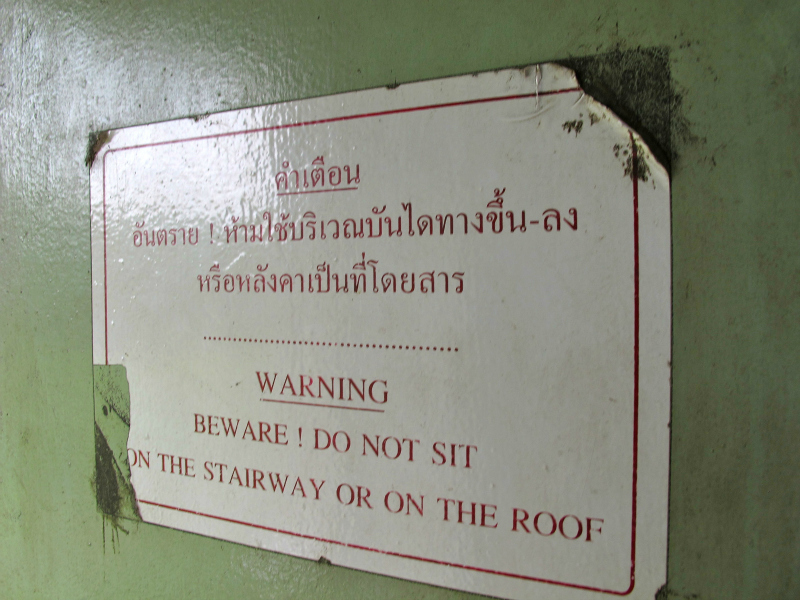 Thanks a lot SRT (State Railway of Thailand) for dashing my dreams of climbing to the roof of the train while it is in motion. 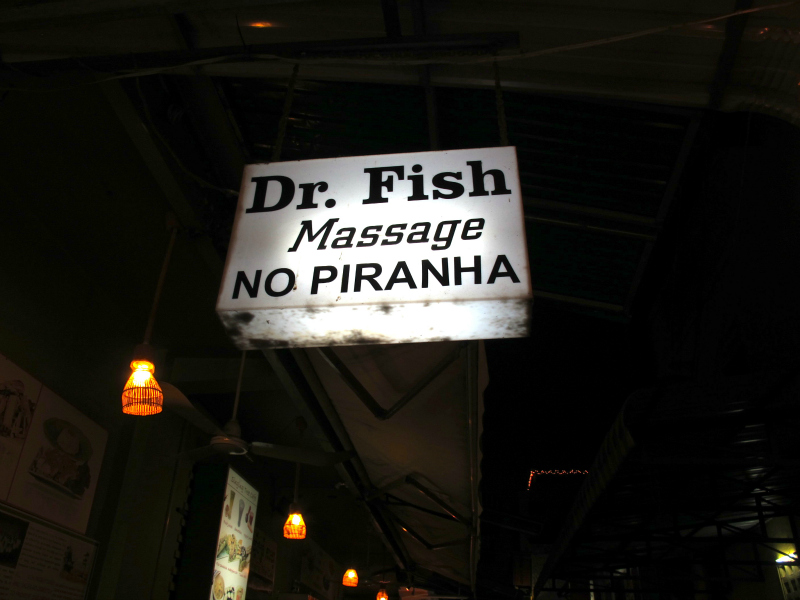 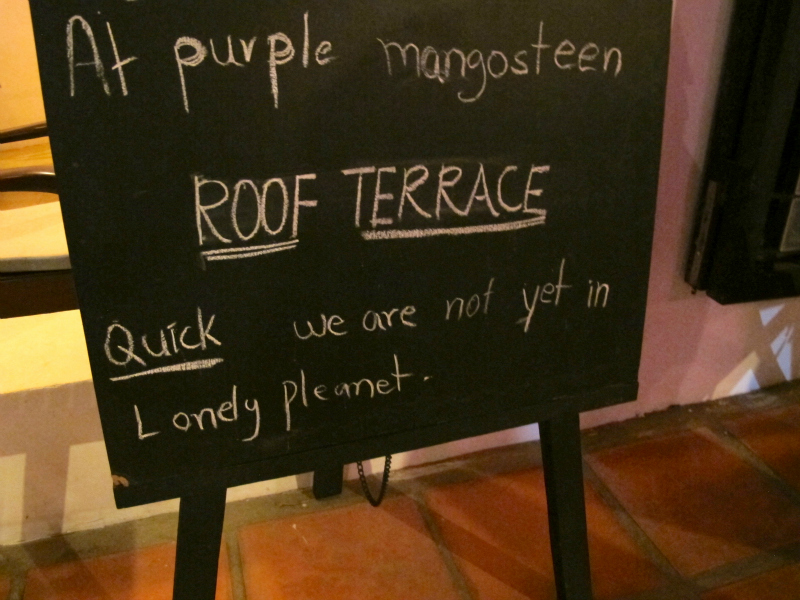 I know this may come as a huge surprise to many of you, but we were the only ones on the rooftop terrace the entire time we were there.  Sounds like the word hasn’t gotten out yet. 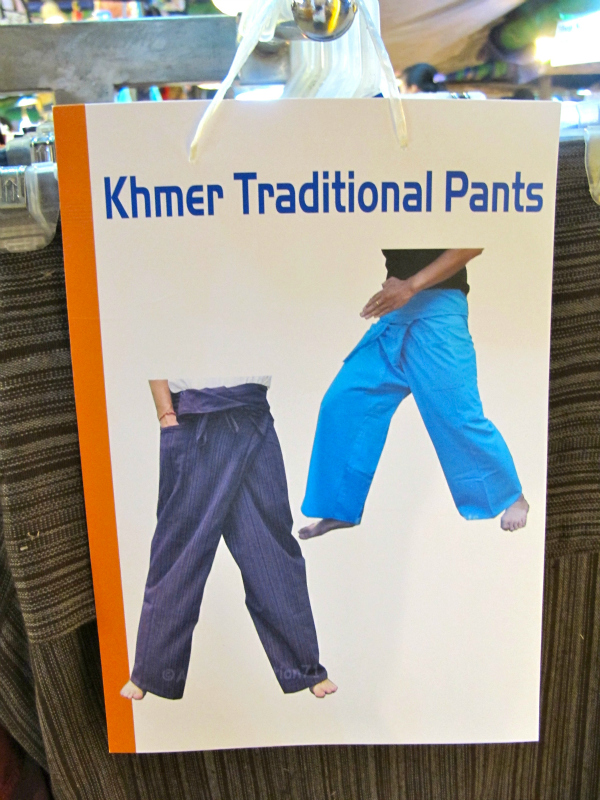 I totally considered buying the pants but they told me the awesome ninja moves were not included and I passed.  I still semi-regret the decision. 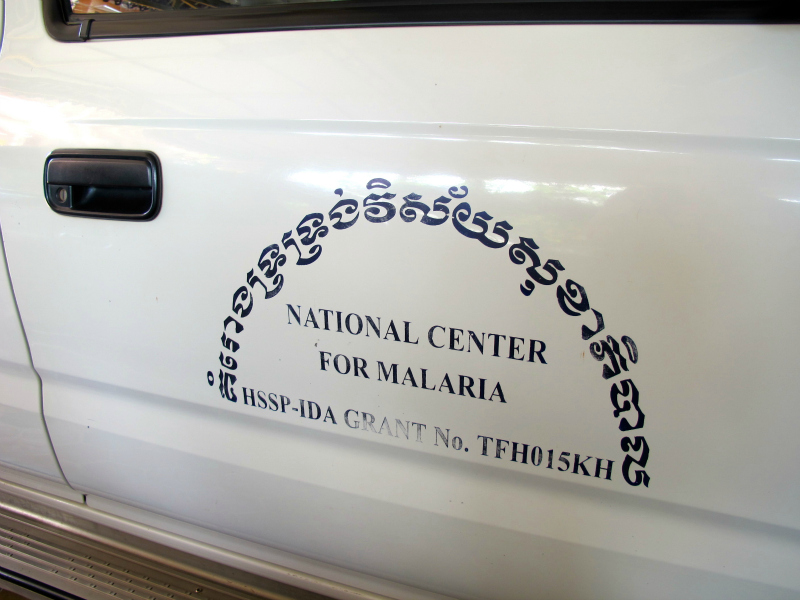 Ok, so this was not really entertaining…but this truck was sitting outside of our Siem Reap guesthouse one day when we arrived back to the place. 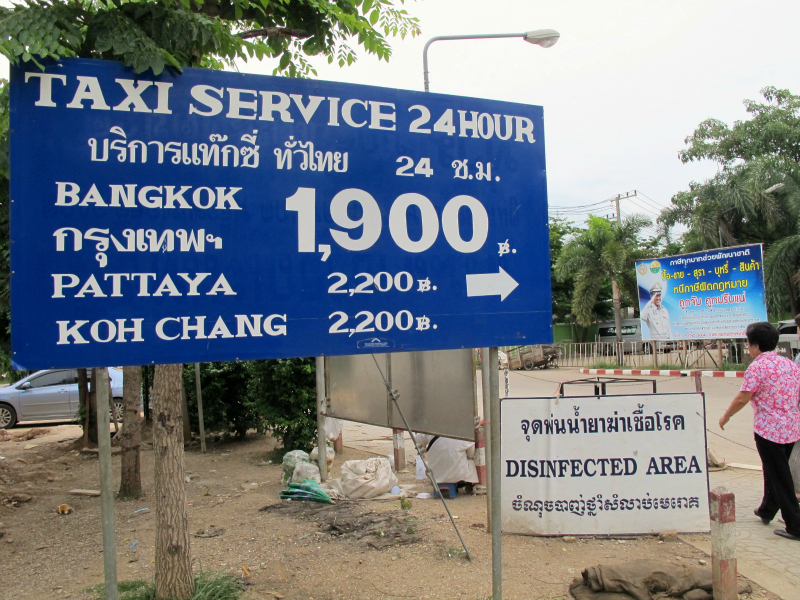 What is a disinfected area and why does the Cambodia/Thailand border crossing look so depressing?

Hope you have a great upcoming week!  I’m in the process of moving (again) so I’ll be a little under the radar.

The giant ‘water drop’ is most likely meant to be him sweating. Signs in asia are the best for a good laugh.

i have no idea what that stands for. i feel like i should do some research because im sadly going to ponder it again…all day….

I read moving and immediately I thought: WordPress. No, you mean real life.

And loved the signs. I’m totally glad you also owned up to your original plan to pee by that sign, I’m guilty of that a few times.

wordpress and real life!!! busy busy times over this way!

when i was in costa rica there was a sign on the bus for seating for pregnant ladies, disabled, and what looked like a man with a cape…we laughed about it the whole trip!!

also i agree that the water is the dude sweating …not sure why his sweat droplets are pool-sized, but then again a lot of these signs dont make sense! haha

come to think of it i think that thailand had a funny pregnant lady sign too! i wish i had taken a photo of it darnit!

Haha, you made me laugh a lot. I like entertaining signs. I wish I’d have a “no balloon” sign. And it is also cool that no stinky fruits are allowed.

the ‘no stinky fruits’ seemed to be posted everywhere (b/c of durian) but it was sooo random to see ‘no balloons’ on it. im sure they have their reasoning (or perhaps not).

The drop stands for a mix of ” omg omg and embarassment! ” you clearly haven’t read a lot of mangas, ;) now, can I have my 20$ in chocolate? XD Rita

really??? hahaha i didnt know that :) and ill give you the $20 next time im down in DK :) spring trip is planned to odense.

Woohooo! Having you visiting is indeed my price! Keep the vile cash ^^