The Most Challenging Tibet Tours in Tibet

Taking a Tibet tour is one of the most exciting adventures in the world, traveling to the world’s highest plateau and exploring the lakes and mountains, monasteries and temples, and the unique culture of the Tibetan people. And while this land has an abundance of tours that you can take, there are some that are more challenging than others, physically, mentally, and spiritually.

Then there is the high altitude to contend with, which poses another challenge for many people traveling to the plateau. While you are dealing with the physical exhaustion, the mental overload, and the spiritual awareness of the tours you are on, altitude plays a big part in all three and is an obstacle that must be overcome in order to tour the plateau and enjoy the stunning scenery and amazing landscapes. Some of the most challenging trips to Tibet can also leave you with a huge sense of accomplishment and a desire to come back and try something even more challenging. 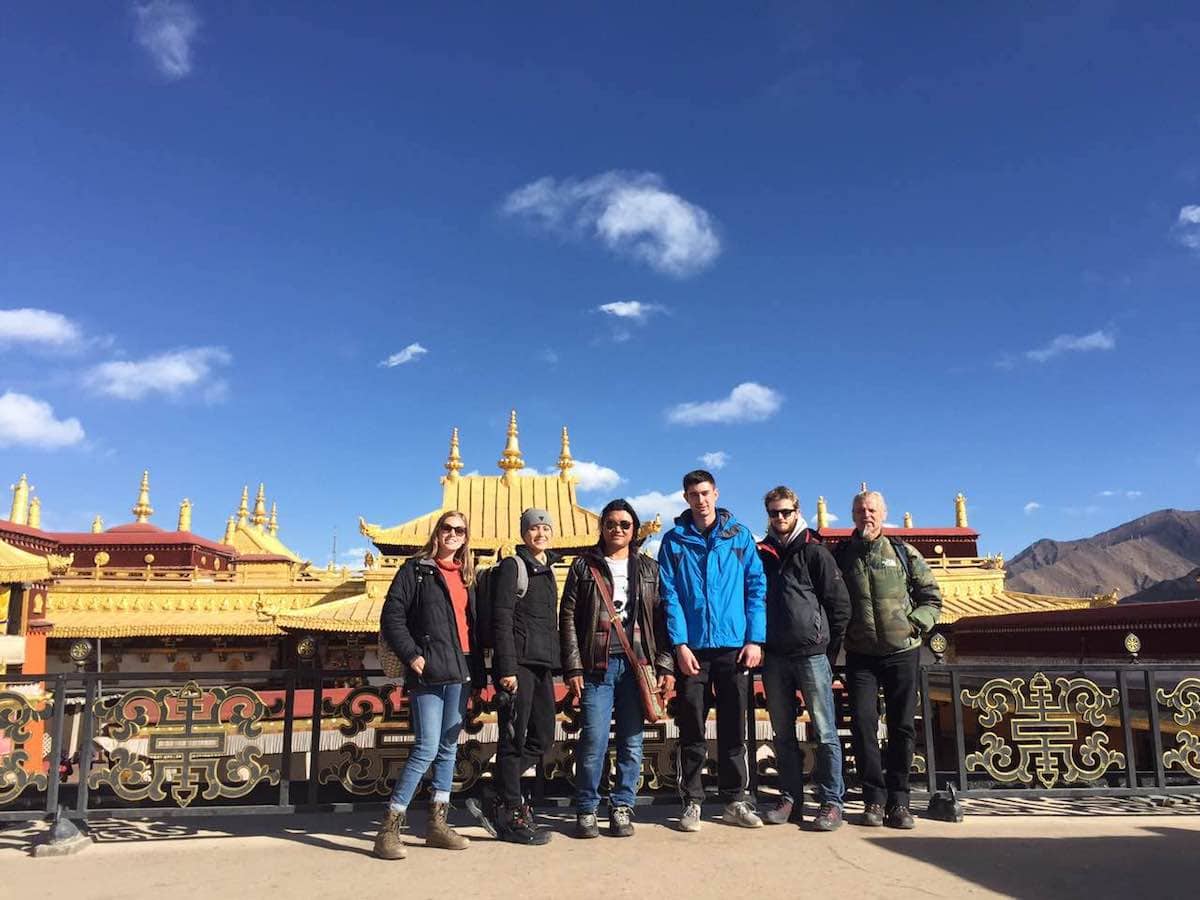 The trek from Tingri to Everest Base Camp is not one of the most challenging treks in Tibet and can be done by anyone with a modest level of fitness. However, when it comes to Everest treks, there is none more challenging than the grueling climb from the tourist base camp (EBC) to the Everest Advance Base Camp (EABC), used by climbers when scaling the North Col to the summit of this massive mountain. The world’s highest trek and one of the most challenging treks in the world, it reaches an altitude of more than 6,500 meters, and is one of the most beautiful treks in Tibet, ascending through an amazing mountain landscape.

The trek only exists in Tibet, and there is no comparable trek on the Nepali side of the mountain, making it a very unique experience for trekking enthusiasts from around the globe. A couple of days is spent acclimatizing at EBC before attempting the trek, which ascends 1,300 meters up the mountain, and covers a distance of around 22 kilometers each way. The trek is normally five days long, and an intermediate camp is set up between Camp 1 and Camp 2 for one of the nightly stops. 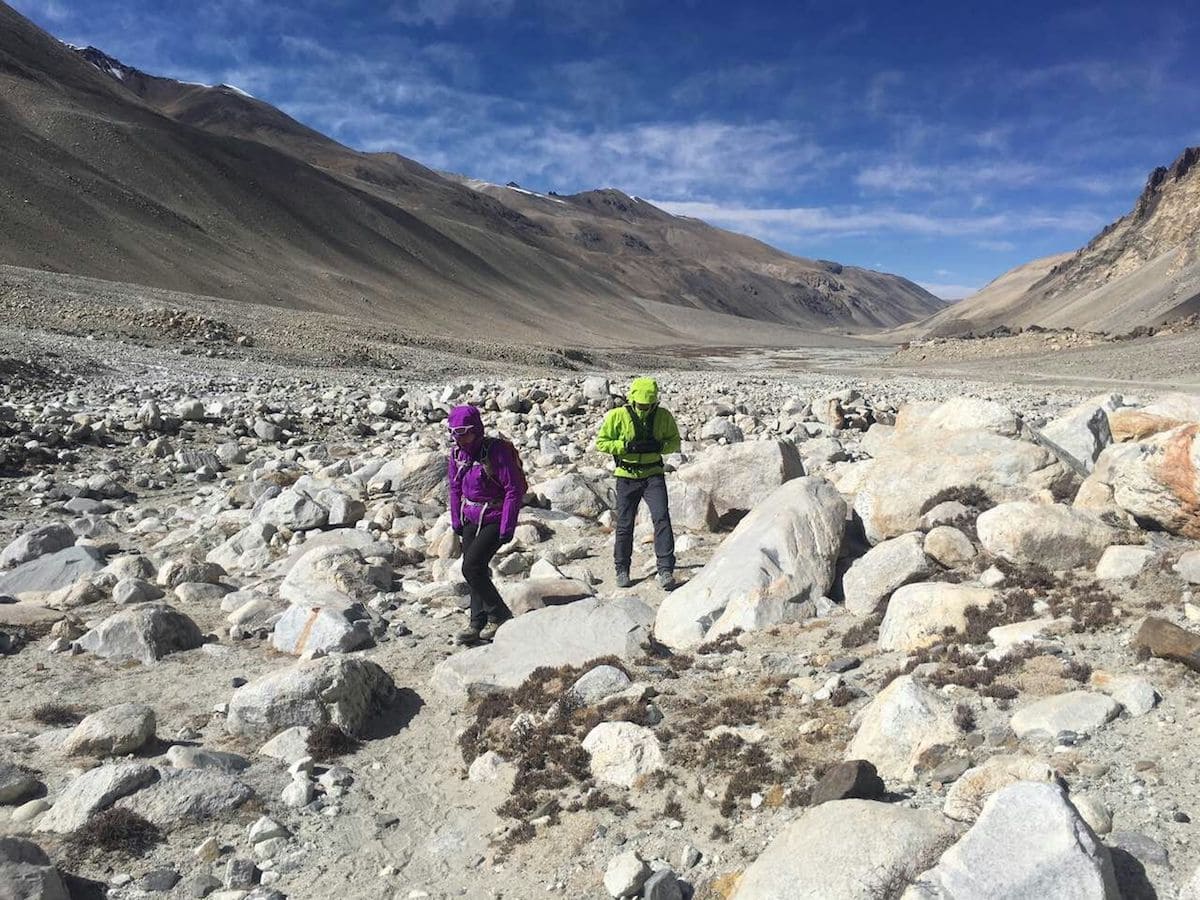 The best time to make this trek is in the climbing window for mountaineers, which runs from April to May and September to October. The window is small at both times of the year, as the climate of Mount Everest is very changeable, and these are the only times when it is calm enough to make the trek. In order to make the trek, you need to have all of the documents and permits for travel in Tibet, including the Tibet Travel Permit, the Alien’s travel Permit, the Frontier Pass, and the trekking permit to make the trek from EBC to EABC.

Cold weather gear is essential, as it can get very cold on the mountain at night, but normal trekking gear is all that is really needed, such as warm trekking pants, layers of thin sweaters to stay warm, a well-padded jacket to keep out the cold, gloves, hat, sunglasses or shaded goggles, and a couple of trekking poles. Specialist mountaineering equipment, such as crampons and ice axes are not necessary, as you will not be doing any actual climbing.

Another of the most spectacular and demanding treks in Tibet is the trek around Mount Kailash in Ngari Prefecture. Located out in the far west of Tibet, Mount Kailash is the world’s most sacred mountain and is a destination for pilgrims from all around the globe. One of the most stunning trekking routes in the world, this trek takes you as close to the sacred mountain as it is possible to get, passing by and staying at some of the ancient Buddhist monasteries that ring the peak and crossing over one of the plateau’s highest passes at Dolma La, 5,636 meters above sea level.

As one of the toughest treks in Tibet, the route takes you over rough and rugged ground, and the climb up to the pass is steep and arduous. However, cresting the top of the pass gives you an amazing view of the surrounding mountains, and the pass itself is an awesome sight, festooned with many stones and prayer flags, their pennants fluttering in the breeze and blowing the blessings of the pilgrims who placed them all across the globe.

The trek starts in the small town of Darchen, at an altitude of 4,575 meters above sea level. The highest point is the Dolma La Pass, which is an ascent of 1,016 meters. While this may not seem like much, it is a hard climb, and one of the highest points in Tibet for trekking, beaten only by the trek to Mount Everest Advance Base Camp at 6,500 meters. 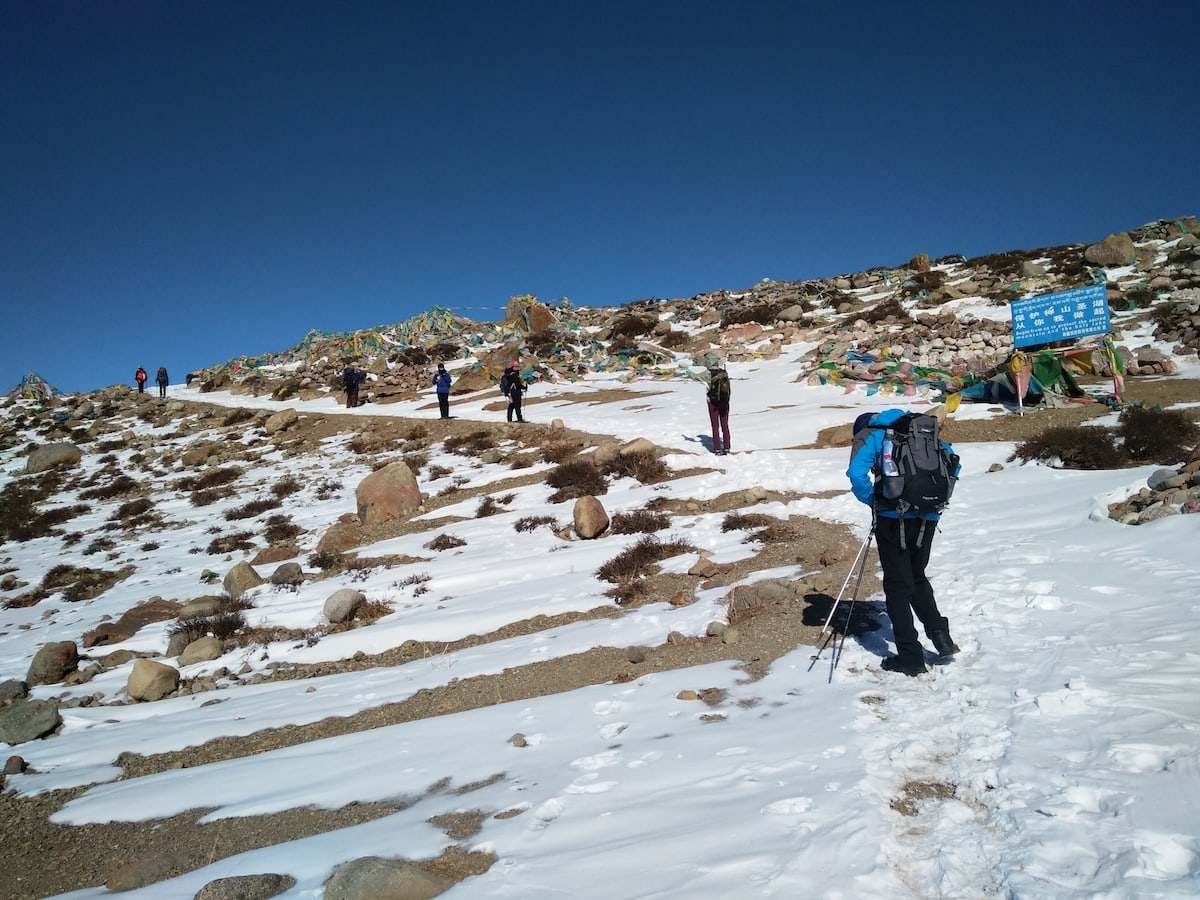 The trek is best done in the spring and autumn seasons, from mid-April to June and Sept to early-Oct, when the weather is mild and cool, with little to no rain or heavy snow. Summer is possible, despite it being the rainy season, in places like Mt.Kailash you won’t have damp and soggy weather throughout the trek. After Oct, it is not really possible to make the trek, since the weather is colder, with a high chance of snow around the mountain.

As well as the Tibet Travel Permit, the Alien’s Travel Permit, and the Frontier Pass, which are required for reaching EBC, you will also need the Restricted Areas Permit, which is applied for at the same time as your Tibet Travel Permit and takes 20 days to process. The permit covers travel to certain military restricted areas of Tibet, of which Ngari Prefecture is one.

Normal trekking gear is all that is needed for the trek, such as strong sturdy hiking boots, warm clothing that can be layered to stay warm, trekking pants, thermal underwear if it is colder when you are trekking, gloves and a hat, and a pair of sunglasses to protect against the bright sunlight. Trekking poles are an advantage, as the climbs can be steep on this 52-kilometer trek.

Climb the Summit of Mt. Everest

The most challenging thing to do in Tibet is the climb to the top of Mount Everest, the world’s highest mountain, from the northern base camp in Shigatse Prefecture of Tibet. A dream for many people, it is actually possible to make this dream a reality, and you can now get a tour that includes a trip to the summit of the famous mountain in the Himalayas.

The northern face of the mountain is much more challenging than the southern face, as the climb is steeper and has more dangerous sections, while the climb from Nepal on the southern side of the mountain is a milder climb, with a shallower slope. The northern route takes you over the North Col, and the Northeast Ridge, the route taken by many explorers in the early days of climbing Mount Everest, including the fatal attempt by Mallory and Irving in 1921, which ended in their deaths on the slopes of the mountain, less than 800 meters from the summit. These days, climbing the mountain is not so hard as it once was, with better equipment and better guides, as well as roped sections up the slopes, something the first expeditions did not have. 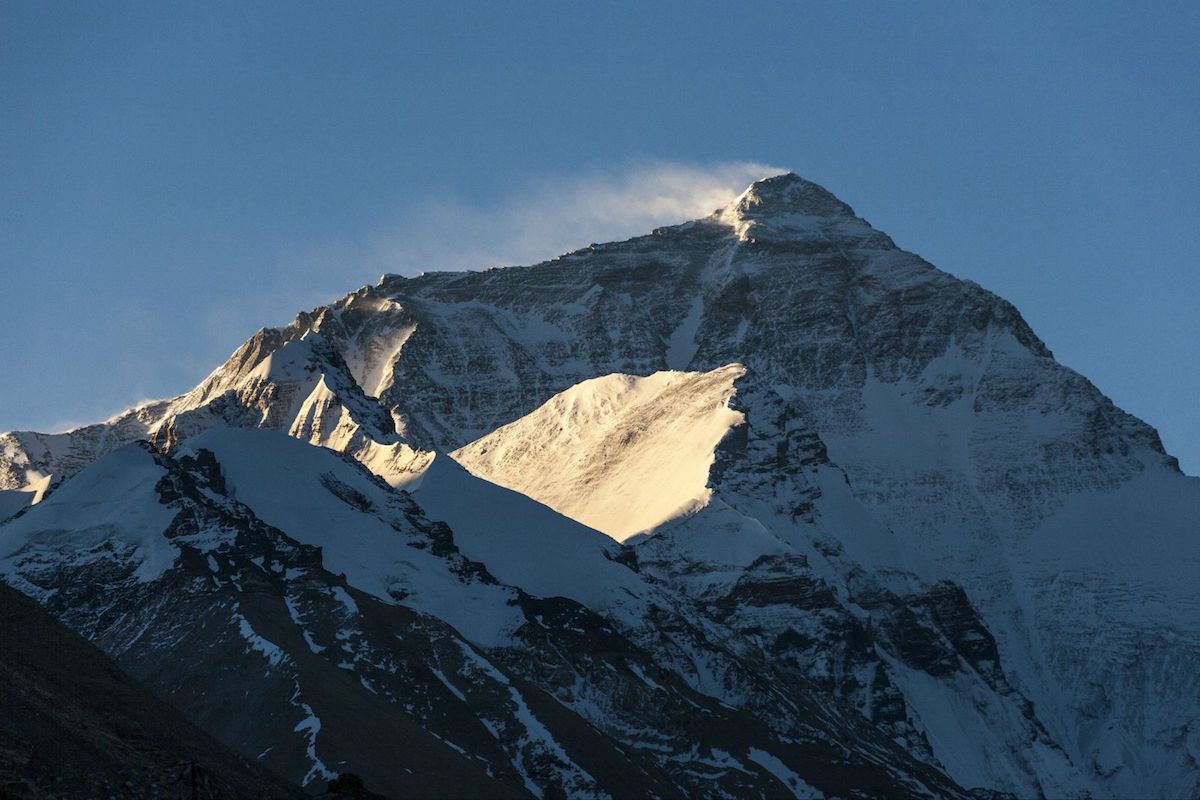 Preparation for this sort of trip is essential, and you should be physically fit in order to even make the attempt. You will need to be experienced in the use of rappelling equipment, as well as ascenders and jammers for the snow and ice sections of the climb. For the higher sections, a good cardiovascular conditioning is required, as well as being mentally and emotionally capable of making the ascent. Strength and endurance are a necessity, as you will be climbing in extremes of cold weather with strong winds, so ideally, only an experienced climber should make this attempt.

Before even considering the attempt to reach the peak of Mount Everest, you should be on a rigid training regimen, in order to increase and maintain your physical strength, which is required since you will be carrying heavy equipment up sometimes sheer faces in cold conditions. For the best training, it is recommended to join a mountaineering club in your region that has regular mountaineering expeditions to lower peaks as practice and training for the ultimate climb.

While the preparation for this awesome adventure may be hard and arduous, it is nothing when you compare it with the stunning experience of making the climb up over one of the hardest routes to the summit of Mount Everest. While it is not the toughest climbing route of the mountain from the Tibetan side (the sheer North Face is the hardest route up to the top, and has only been climbed by a small handful of people), it is the toughest that can be done as part of an expedition team or solo with guides and Sherpas.

The views from the different sections of the mountain are some of the most amazing you will ever see, as there is no view as high in the world, and from the top, it is said that on a clear day, you can see all the way to Mount Kailash, hundreds of kilometers to the north, and all the way south to the Kathmandu valley. The opportunity to place your own mark on the summit of Everest, along with the flags of many nations that have reached the top of the mountain, and having your name in the public records of those that reached the top, are achievements that are unmatched across the globe, and something you can be proud of having done. Since it was first discovered in the 19th century, it was almost 100 years before the mountain was actually conquered, and to be among those famous names is an awesome experience.